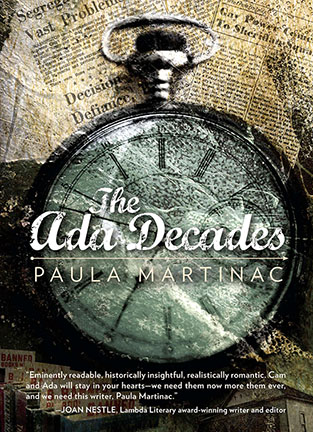 Your grandmother used to warn you not to wish your life away. The years pass quickly enough, she said, so hold each minute. Savor what you have. Enjoy your days, months, years, and The Ada Decades by Paula Martinac.

Once, that was Clay, Jr.’s job but he was busy with high school things, so twelve-year-old Ada fetched Daddy’s tools— which was what she was doing when she found an envelope with naked-lady pictures and a postcard of black men hanging from a tree. She took those pictures from the toolbox, even though she knew she shouldn’t, and she approached the only person she could trust: her school’s librarian, who explained how things were before the War.

Ten years later, things were still that way. It was 1957 and, as Central Charlotte Junior High’s new librarian, Ada watched, paralyzed, while police escorted the school’s first black student down the halls. Ada embraced integration, but she hadn’t known what to do. She wished she’d had the self-confidence of the English teacher, Cam Lively, who’d welcomed the frightened girl with a smile.

Ada understood fear, that was true. She’d always known she was different, but women weren’t supposed to be that way about other women. She didn’t know exactly how to say what she felt, but she knew it was wrong—that is, until Miss Lively invited Ada to a “book club” that was really just a gathering for gay men and lesbians.

There, Ada found friends, a tribe, and someone to love.

But Ada was from the wrong side of the tracks, her parents were poor, and she felt it. Cam came from money, and neither woman’s family approved of the relationship. The pressures they felt in 1962—the need to hide and keep quiet—were almost unendurable; indeed, some friends couldn’t take it anymore. How much easier their lives would be if they could just be themselves!

Readers may notice the word “romantic” on the cover of The Ada Decades, but that’s one of the lesser aspects of this novel. Yes, there’s a bit of a love story here, but it’s more fictionalized history than anything.

Beginning with a young girl’s early understanding of racial discrimination, author Paula Martinac tells a multi-layered tale from the perspective of an often-humorless, rather prudish, and complicated character. Spanning nearly seventy years, the story is appealing, surprisingly chaste, and based within accurately-told historical events—but there’s no Forrest Gump here: for Ada and Cam, the outside world is there for commentary, but not always for participation. Instead, Martinac’s characters are everyday women, living pleasantly normal lives, and their story ends in a satisfyingly quiet way.

The cover of this book is no grabber and that’s too bad because the story itself is, starting on its first page. If you’re in the mood for a nice, gentle surprise of a tale that lacks drama and graphic scenes, The Ada Decades will tick all the boxes.