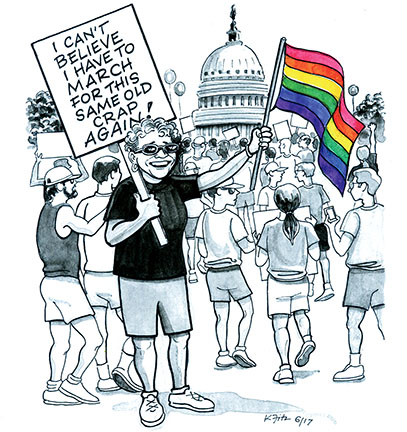 Time Marches On and On…

Okay, I’m scribbling this after the gayest day ever: The March for Equality, then the Tony Awards. To echo Ethel Merman, “Who could ask for anything more?”

Well, we could ask for something more, like respect from our chief executive and the GOP, but that’s tomorrow’s quest. Tonight I’m just reveling in the glow from thousands of gay people and our allies, marching, chanting, singing, hoisting divine signs and throwing a gigantic and meaningful party throughout downtown D.C.

Mostly, I loved that the crowd was overflowing with young people—tattooed, razor shorn, pink-haired, outrageous, not-so-outrageous, joyous young people! My generation was out in force as well but the encouraging signs of youngsters taking up the pride flags and resistance banners made my heart sing.

By the time I dragged my rainbow clad ass from 17th and I, past the White House (as I had done during the Carter, Reagan, Bush I, Clinton, Bush 2, years), then around 15th Street, to the Mall, I was schvitzing and slowing down. Didn’t know what hurt worse, my pride or my bunions. To avoid being trampled by a crew from the DC Striders, I hobbled from the throng, taking refuge in the shade, to watch the glory go by.

Favorite signs: It take balls to be a fairy; F%#K Trump—Eew, no!; Does this ass (picture of Trump) make my country look small?; If God hates gays, why is there glitter?; If Hillary had won, we’d be at brunch now; Covfefe: Being such an insecure douche bag you can’t even admit you made a typo; and the inevitable “Liar, Liar” with a photo of Trumps pants on fire.

Favorite chants: “Tiny Hands, Tiny Feet, all you do is Tweet, Tweet, Tweet; This is what Democracy Looks Like”; and the time-honored “Hey, Hey, Ho Ho”, with the 2017 coda “Donald Trump has got to go!”

Allies lined the street, waving and cheering. Plenty of women with baby strollers rolled by. Wonder Woman costumes abounded, with very few drag queens in full regalia— whether due to the heat or the times, I know not, but the several I saw received humongous cheers.

Mostly, though, this march of humanity featured people who are resisting, who have had enough of discrimination and marginalization, who are determined to make noise and take a stand against hate in any form. We’re an integral part of the American fabric, increasingly out, proud and no longer in the shadows. I’ve watched those shadows steadily recede since my first activism in the late 1970s.

This march, one part angry, one part joyous, all parts pride, saw your dentist, CEO, gay chorus buddies, our neighbors, colleagues, best buds, and more, gather to just say NO!

We baby boomers have had enough! We survived the AIDS epidemic with tremendous loss, we’ve fought like hell for respect, basic civil rights, and an end to “otherness.” We’ve lived with anti-gay shit our whole lives. We are mad as hell and we’re not going to take it anymore.

And the youngsters, coming out young, in school, having watched gay people celebrated on TV and in the movies, and through eight respectful years of the Obama administration are now really scared. 2017 may be the first time they’ve realized that their rights could be taken away, their very lives threatened. It’s a wake-up call. They are loud and proud and a marvel to see marching. Welcome to the fight!

I know those assembled on the National Mall stood ready to continue the party with speeches, entertainment, a street fair and hours to come of pride and joy. But I was toast, literally from the sun, figuratively from the 15,000 steps on my pedometer.

Our gang fled to the Metro and the respite of frozen margaritas at the Banana Café. Then it was home for the Tonys, where so many nominees and winners kissed their same-sex spouses and made speeches echoing their support for the arts and resistance to our current political nightmare.

I fell asleep in front of the TV right after Bette Midler thanked everyone ever born.

You know, this better be the last time our government screws with us, threatens our equality and behaves like bigoted moronic thugs. Because I’m just too old to march for this same shit again.

Okay, if I have to, I will. But I’ll be auditioning for a cute baby dyke to accompany me and keep me out of trouble….