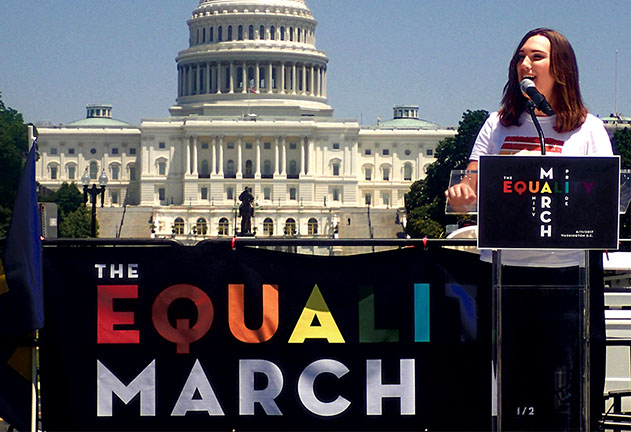 McBride is the honoree for the club’s annual summer reception to be held from 2-4 p.m. at Mariachi Restaurant on Wilmington Avenue in Rehoboth Beach. The public is welcome to attend.

And if you missed Sarah McBride’s electric keynote address (producing both cheers and tears) at CAMP Rehoboth’s recent Women’s FEST, this is your chance to meet and greet a woman you will be hearing about in the future.

With an exciting resume that belies her youth, McBride has made both headlines and waves in her work with—among other places and organizations—the Obama White House, Equality Delaware, Governor Jack Markell’s staff, and much, much more.

The Wilmington native was a campaign staffer and worked in 2008 for Governor Jack Markell, and, in 2010, for former Delaware Attorney General, the late Beau Biden.

In 2012, McBride made national headlines when she came out as transgender in her last week as student body president at American University. In fact, she came out in an article in The Eagle, American University’s student newspaper. While startling to some, according to McBride, there were absolutely no negative incidents or problems as a result of her transition.

McBride has also worked at the Center for American Progress and interned at the White House—as the first out trans woman ever to do so. In fact she applied for the White House internship prior to her transition, using the name Sarah and explaining that she was transgender. She was approved for the internship with the White House Office of Public Engagement and Intergovernmental Affairs a short time later.

In January 2013, closer to home, McBride joined the board of directors of Equality Delaware where she quickly became the state’s leading advocate for legal protections and hate crimes legislation for the transgender community of Delaware. McBride, along with her family led the lobbying effort for legislation protecting Delawareans from discrimination on the basis of gender identity and expression in employment, housing, insurance, and public accommodations.

She remains a board member with Equality Delaware and continues to advocate for LGBT rights.

But it was last summer, when McBride made the most headlines. On July 28, 2016, at the Democratic National Convention in Philadelphia, Sarah McBride became the first openly transgender person to speak at a national party convention.

Digital video recorders all over the state went into action as the Delaware woman took the stage. Not only did she speak out for LGBT rights, during her short speech, but she received a standing ovation from the convention floor when she told the remarkable story of her late husband’s fight for LGBT rights. Andy Cray, a transgender man, who she met and fell in love with, continued to fight and speak out even as he was dying of cancer. They were married just four days before he passed away in August 2014.

Telling that tragic, but important story, just this past April, at CAMP Rehoboth’s Women’s FEST, brought the full house to tears and produced cheers for her resolve to keep fighting for LGBT rights.

McBride also shared with the FEST audience that when she came out as transgender, one of her first calls came from the Biden and Markell families, offering their continued love and support.

Currently, Sarah McBride serves as National Press Secretary for the Human Rights Campaign, a national LGBT advocacy organization. She made headlines yet again, when traveling through North Carolina last fall, when she took a selfie in the ladies room at a rest stop to protest the anti-transgender “bathroom bill,” passed by the state legislature.

So come help the Stonewall Democrats celebrate Sarah McBride. The summer reception is always a well-attended event, with many elected officials and local residents coming together to celebrate those tireless advocates who work hard for LGBT rights. It’s also a great opportunity to meet the honorees and mingle with elected officials in a very informal and comfortable setting.

If you have not met or heard Sarah McBride this is the perfect opportunity to do so. You may well be able to say “you knew her when” as this influential activist is destined to make many more headlines in the future.