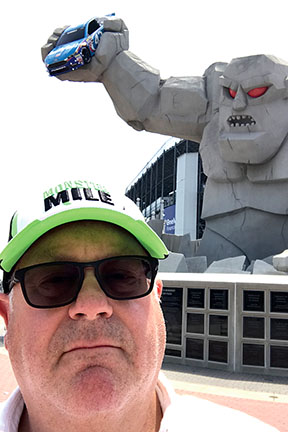 “Whatever you do, do not order a glass of chardonnay.”

That was my father’s advice the time my partner Michael and I accompanied him to our first NASCAR race at the Charlotte Motor Speedway. Dear old dad had been dabbling in NASCAR for a while as a spectator and even as a minor investor in the RC Cola race team. My initial assumption was he perhaps thought it might look too gay to order wine. The reality was he knew the chardonnay was crappy and that a traditional American lager pairs best with stock car racing.

My father would have grimaced had he heard me order a skinny margarita at a makeshift bar outside the “Monster Mile,” also known as the Dover International Speedway, this past weekend. But here’s the deal. I’d driven forty-five minutes from Rehoboth to a satellite parking lot at a defunct shopping mall in Dover where I boarded a yellow school bus to ride a couple of more miles to the racetrack.

It was convenient but undignified. The entire bus went silent when yours truly got on. I was the only one not wearing a t-shirt. Rather, I had on a starched, white, button-down shirt, and it was tucked into a pair of orange shorts and secured by a blue and white striped ribbon belt. I neither sported a garish colored fan cap with the number of my favorite driver, nor was I packing a cooler like every other male on the bus. People averted eye contact as I made my way towards the back of the bus where a super-sized woman in pink bedazzled Jeff Gordon fan attire, begrudgingly scooted over to make room for me in the very last row.

There were lots of rebel flags fluttering in the breeze atop RV trailers outside the racetrack where the bus deposited us race fans. In fact, I saw more stars and bars than “Make America Great Again” ball caps. But aren’t they really cut from the same cloth?

Back to the coolers for a moment... BYO was the order of the day and it certainly explained the lack of lines to purchase beer and mixed drinks. People hauled coolers of all shapes and sizes. I witnessed not one, but two, different men pulling mobile oxygen tank carts with coolers attached using bungee cords. People pushed them in grocery carts and pulled them in little red wagons. I saw a few fancy coolers that looked like Tumi luggage. I even spotted one duct taped to the back of a wheelchair. A woman in a camo tube top and wearing strands of plastic M&M candies—a Kyle Bush fan no doubt—pushed a stroller with two baby Igloo coolers nestled in beside her sleeping child. I had to wonder which was the most precious cargo on that hot spring afternoon.

Now you know why I needed that margarita. Actually, I needed several because I am not a race fan. Watching loud cars drive around an oval track four hundred times is boring. So why did I opt to spend a sunny Sunday afternoon drinking Tequila at a NASCAR race in Dover rather than reading the New Yorker on the beach?

Besides the fact that drinking is encouraged, I must confess an odd attraction to NASCAR and its culture mash up of high performance racecars and lowbrow culture. It’s rowdy and boozy and sexy and irreverent. A little like Rehoboth, I’d say. They even sell Grotto Pizza at the Monster Mile.

I always liked that the sport was born in the Southern Appalachian mountains of North Carolina and Virginia where I grew up, a place where during the 1930s moonshiners and bootleggers souped up their cars and outran the law on Saturday night and then raced against each other on Sunday afternoons. Who doesn’t have a soft spot for a cute redneck boy with a chaw in his jaw?

NASCAR, quite frankly, appeals to my sense of adventure and desire to observe and explore my environs. I can’t tell you how many times I’ve driven by the hulking race stadium right off Route One in Dover and wondered what it was like. I’ve toured the Louvre Museum and walked Tiananmen Square. So of course I had to attend a race at the Monster Mile, so named, you might be interested to know, because the one-mile oval track is extremely demanding on the cars and drivers.

My advice, should you ever decide to take in a race at Dover, is simple but it will ensure a high-value experience.

First, order tickets early and select them in the Richard Petty section, as close to the front row as you can. You want to feel the rush of hot air in your chest hair and smell the burn of rubber tires at 105 miles per hour.

Second, pose and preen in front of Miles the Monster as if it were a step and repeat at the Oscars. Miles the Monster is a clever name for the 46-feet tall fiberglass structure standing outside the racetrack. He holds a full-size stock car in his hand and his red eyes light up at night.

Third, buy some earplugs and a fan cap.

Fourth, leave before the race is over. Trust me, one hundred laps is more than enough and you’ll want to beat the crowd.

And finally, do not, and I repeat: “Do not order a skinny margarita.”