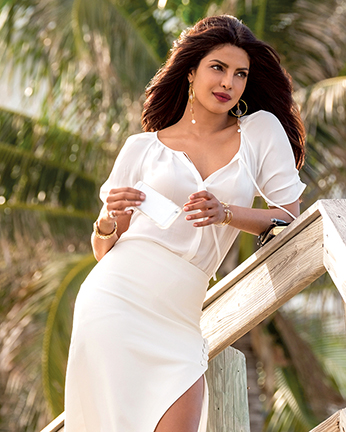 Priyanka Chopra has your back.

Though India’s government still criminalizes homosexuality, Chopra—global icon, star of ABC’s gay-inclusive Quantico and one of Time magazine’s 100 most influential people of 2016 (she has nearly 18 million Twitter followers, more than Beyoncé)—is standing up for LGBT people everywhere. The actress-model-producer candidly affirms her support for the community during our recent call, from Miami, where Chopra, 34, speaks passionately about issues affecting her queer friends and fans—including whether Baywatch co-star Zac Efron’s abs are real.

Have you done gay press in India?

Yes. I have because I am very pro-LGBT community and pro-choice, and I think that’s the conversation that exists all around the world.

What was your introduction to the gay community?

I was in high school in America when I was 12 years old and one of my best friends—I used to borrow his shoes! He used to dress in drag. In fact, I remember wearing his shoes to prom!

Wait, you were wearing his shoes?

Yeah, we were the same size! To me, there wasn’t a difference. You never thought, “OK, this makes it different.” He was just my friend and he had the best shoes. Shoes are expensive! And he always had the best ones!

You once said you’d been propositioned by lesbians, so you obviously have a gay following. When were you first aware of your LGBT following?

I think when…when I was propositioned! (Laughs) (It was at) a nightclub after a couple of years of being an actress. It was extremely flattering, for sure. And you know, honestly, I believe that everyone has choices about their sexuality and who they are, more than anything else. I’m not judgmental about it at all, and I think it’s actually amazing.

Because India deems homosexuality illegal, have you ever had any hesitation speaking openly about LGBT issues?

I mean, not really. I don’t. I’m a very opinionated girl, and I was raised to be that way, so I’m not afraid and won’t shy away from what I believe in. I always encourage everyone who likes my work or likes me to be the same way. The world is such a small place today, and we all have to understand that if we don’t stand by each other, then we’re only creating divisions in the world. That’s what I stand for everywhere, especially for the LGBT community. We’re just people who want to be the best versions of ourselves.

Can you say that you are pro-gay in India and not receive flak for your progressive views?

I would, and I may or may not. Wherever in the world you go—I don’t think it’s just something that happens in India—you would get flak for it. But it’s something I believe in, and I stand by whatever I say.

Were you propositioned at a gay nightclub?

It was in Indonesia, actually. In Bali. And it wasn’t a gay nightclub. It was just a nightclub, and this girl was a big fan, and she was just super flattering, and I didn’t know what to say. I just said, “I have a boyfriend!” (Laughs) Whether it was a girl or a boy, I think that’s the best way to handle a situation like that—if you’re not interested, that is!

Could you talk about the changing gayness of Bollywood over the years?

Modern-day Indian films are extremely accepting of different kinds of genres, whether it’s the LGBT community or the storytelling, which is out of the box. We’re at a place where we’re just telling really great stories about so many different things, and the LGBT community is a big part of that.

As someone who’s involved with regional cinema via your own India-based production house, Purple Pebble Pictures, do you plan on producing stories related to the LGBT community?

Yes. I don’t think that’s the way I look at storytelling, anyway. You don’t pick up a subject or something to talk about and then make a movie. The story has to lend itself to that. But I’m definitely somebody who would be open to making a film about the LGBT community, completely, if the story lends itself to it.

Just because there are gay characters doesn’t mean the plot needs to be about them being gay.

My TV show, Quantico, has so many incredibly strong gay characters, and that is a part of diversity.

Exactly. And not labels.

Regarding Baywatch: I feel so bad for you. Having to work alongside two of the world’s studliest studs—Zac and Dwayne —must’ve been hard. 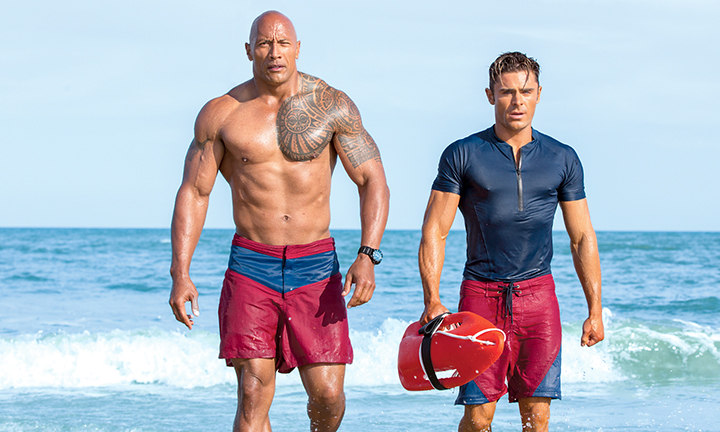 After working with a shirtless Zac Efron, do you better understand the infatuation gay men have with him?

I guess I do understand the infatuation, definitely, that everybody has with Zac. I have a lot of friends who are fans of him and asked me to find out about the situation with his abs: “Are they real or not?” And I can vouch for the fact that they’re real. We spent a lot of time doing scenes and I was like, “Wait a minute?” Honestly, all jokes aside, it takes an incredible amount of discipline, which both Zac and Dwayne have, when it comes to their training and their working out. It’s amazing to see.

Tell me about your feminist line in the movie when Zac calls you “crazy” and you tell him, “If I were a man, you’d call me driven.”

Can you relate to her and her drive?

I have to say, Victoria is a lot more evil than me, for sure. (Laughs) But ambition is a really great thing for young people and for people in general. It gives you goals and then you become whoever you wanna be, and if you don’t have that drive, you’ll never find the best version of you, so, yes, I definitely think I’m similar.

Dostana, about two straight men who pretend they’re gay to win your love, was called “rebellious” upon its release in 2008 because of its queer content. Did you make it as a pro-gay statement?

Well, there need to be conversations. And entertainment, especially pop culture, is such a great way to make the conversation go forward. Dostana was extremely progressive, and our producer is one of the biggest producers in India and he’s an openly gay man who just had two babies. Those are conversations that take the LGBT community forward. Him making the film and having the conversation and taking that forward was a big step in that direction.

You’re referring to Karan Johar, I believe, who recently wrote in his autobiography, “(I) will not say the three words that possibly everybody knows about me,” because “I live in a country where I could possibly be jailed for saying this.” What did you make of his approach to coming out?

I guess, culturally, it’s very hard to do. It’s something that people face all over the world, but it gets really difficult when you have that kind of resistance. It can get really ugly. And for him to do it even in the way he did, it was extremely brave. He’s always been someone who openly talks about it on his TV show (Koffee with Karan) and he’s really an icon for the LGBT community, and his struggles are real.

Generally, and not just with Karan, (coming out) is a hard thing to deal with, especially in countries where it’s become hard to be who you are. The more and more I travel around the world, I see that it’s something that you see in any country. There is such a resistance to people just being themselves, and, as humanity, we need to deconstruct it to the point where people can make their own choices and that’s when we’ll be in a progressive society. 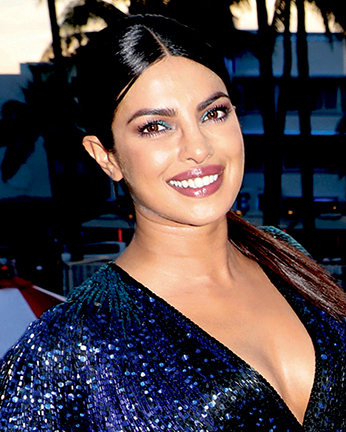