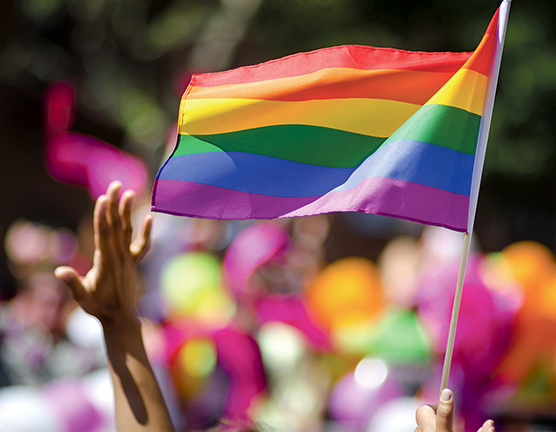 Dig Out Your Rainbow-Colored Marching Boots…

…And step it up loud, proud, and with a renewed sense of urgency, as June 11 is the National LGBT March on Washington.
I know, in recent years, the Gay Pride Circuit seemed like one big celebration after the next. Rulings toppled the old and the ugly and the LGBT community hit highs none of us even dared to dream we would see in our lifetime (except maybe Evan Wolfson. Pause for moment of murmured respect. Okay. Resuming).

Edie Windsor took one heck of a victory lap in NYC in 2013; Sir Ian McKellan and Sir Derek Jacobi brought a bit of English class to the 2015 parade, arguably only to be outclassed by Vice President Joe Biden running through the halls of the White House wearing a rainbow cape, our very own super hero.

On the West Coast, the cast of Transparent was out and about as “community marshals.” And let’s not forget 2016 and our neighbors to the north. We thrilled to Prime Minister Justin Trudeau saying his marching shouldn’t even be a big deal, “he’s been coming to Pride for years.”

And today, with NYC’s Pride March amassing more than two million participants, even the mainstream media is joining the fun.
This year WABC-TV (NYC) is televising and streaming the march. Wow.

Which feels like a kick off your shoes, put the tiara on the mantle, and enjoy “supporting” it all in on your big screen TV moment. Maybe even have friends over for a few ribald cock-tails or two. After all these years of fighting, marching, and yes, heavy partying, your feet are tired. They deserve a rest. They’ve earned it.

And it’s not like most of us haven’t been marching for months now!

But before you get too comfortable, I hear the music from Jaws. The sharks are circling.

Last January 20th perched us on an ugly, shaky, precipice.

And it’s a much deeper, more organized and more hate-filled crevasse below than just the screaming, ignorant bigots unleashed—and emboldened—by our newest administration.

Both South Dakota and Texas passed bills this year allowing state-funded adoption and foster care agencies to turn away applicants on religious grounds or “my religion doesn’t like queers so we don’t have to serve you.” BTW, if you’re Jewish, Muslim, Sikh, Buddhist, or Atheist, it’s not looking too good for you either.

And if that isn’t frightening enough, how about Texas’ latest nursing care bill’s amendment? It would bar the Texas Board of Nursing from punishing discriminatory actions if they are committed in the service of a nurse’s religious beliefs. So, if you’re gay, we don’t have to care for you; if you’re a married woman coming to us to discuss a private matter, we can tell your husband…after all, you are his chattel!

The list goes on, tagging legitimate, often needed legislations with bonus hate clauses, all wrapped up in defending religious freedom and other ignominious catch phrases.

And while it’s staggering, there is one silver lining—we are not in it alone.

For every practice which discriminates against the LGBTQ+ community, there are dozens of other groups caught in their web of hate. The ancient proverb reminds us “the enemy of my enemy is my friend.” After all these years, perhaps our proverb should be, “the friend of my friend is my friend.” We have an array of allies and an alphabet of letters.

But there are equally many ways to live.

One way is hiding in the shadows.

One way is watching from the sidelines.

And one way is cheering and screaming, front and center, loud and proud, bold and brave.

Yes, I know. It’s exhausting. So take a moment. Have a deep sigh.

And as we link arms, wave our flags, and share our photos, we will know that too.

Stefani Deoul is the author of the YA mystery novel On a LARP from Bywater Books. Contact Stefani.