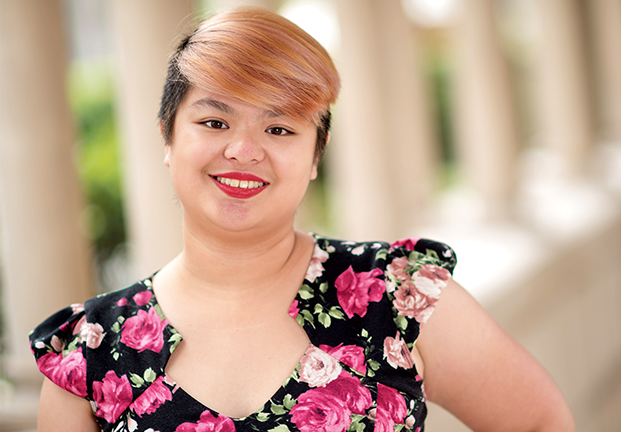 Growing up in central California an hour and a half west of Yosemite, Jen Ramos was not exactly a sports fan. But one day 10 years ago, Ramos “randomly” watched a post-season Major League Baseball game and was hooked.

Ramos was intrigued by the strategy needed, and the analytical perspective that went into every decision. Ramos studied the game, figuring out details and reading books like Moneyball.

At Mills College, Ramos majored in creative writing and minored in journalism. The all-women’s college in Oakland is known for many things—including its transgender admission policy. “Anyone who identifies as female, was assigned that gender at birth, or is transitioning to female is welcome,” Ramos explains.

The more Ramos learned about the gender spectrum and gender fluidity, the more Ramos realized “I was on that spectrum. I don’t necessarily identify as female.” After “a lifelong journey to figure out why I don’t feel I fit in as a woman”—and many conversations with classmates and professors at Mills—Ramos identified as genderqueer. At the beginning of each semester, instructors ask students which pronouns they prefer. Jen answered, “they.”

During their time at Mills, Ramos continued to study baseball. The front office side of baseball operations seemed interesting. After graduation, they wrote about the San Francisco Giants for Aerys, the first online sports network founded and operated entirely by women. But minor league baseball was even more fascinating. Ramos went to Fresno Grizzlies and Modeseto Nuts games. They learned to scout opposing teams, and found mentors.

Last year, they got their master’s degree at the University of Southern California. They worked on their capstone with Sam Miller, a baseball statistical analyst with the Sonoma Stompers. He recommended Ramos for a position with the independent team, which plays in the Pacific Association of Professional Baseball Club league.

OK, it’s not the New York Yankees, but change has to start somewhere. In this case, it begins with a team that, Ramos notes, is “very progressive.”

In 2015 the Stompers signed Sean Conroy. Miller—the sabermetrician—picked him sight unseen based on his numbers. Miller had no idea he had selected the first openly gay player in all of pro baseball.

Last year, the Stompers became the first coed team in professional baseball since the 1950s, when they added three women to their roster. Two returned this spring.

The Stompers did not set out to break barriers, Ramos says. “They just liked Sean as a player. And they just wanted to sign good players, male or female.”

It was the same when they offered Ramos a job. They were the best person for the job, and gender identity had nothing to do with anything.

Ramos realizes, though, the significance of their position. “There’s a lot of machismo and masculinity in the sports world—especially in the major leagues,” they say. “They’re not really gender-integrated. A lot of front offices are almost all male.”

As a result, Ramos says, “people think twice before being open about their sexuality (if it’s not straight). In that environment, there’s a lot of worry about what people might say.”

While Ramos believes the stereotype of “toxic masculinity” might be outdated, they know it does exist in some places. “Each team culture and every locker room is different,” they say. “But still, there’s always that underlying layer about safety.”

In Sonoma, Ramos’ experience has been “fantastic.” The front office has been supportive, as expected. But so has the team, the fans and the entire community.

The only negativity Ramos has felt has been online. Those comments could have come from anyone, far away from enlightened Northern California. “I recognize I’m privileged,” Ramos says.

But they’ve been buoyed by emails and tweets, many of which also came from beyond Sonoma. Many come from non-binary baseball fans. “They thank me for helping them exist in the baseball space they love,” Ramos says.

Ramos hopes to stay with the Stompers “as long as they want me.” But, like everyone working in professional sports, Ramos also would like to move to bigger leagues.

Either in Sonoma, California, or somewhere far, far away.