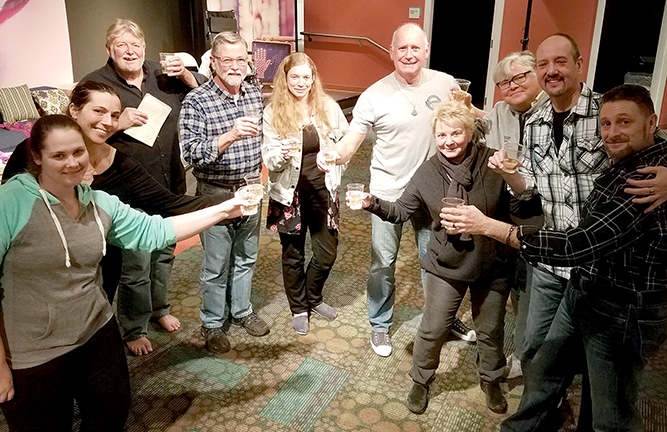 It was early February when I began to see the first signs of spring in my yard. Fortunately, I’m married to a landscaper who identified each tiny, tender shoot—“Daffodil, hyacinth, tulip…”—and who also panicked about the advent of Spring six weeks early. The first weekend of March reversed the trend and we spent an hour fighting the cold and wind to cover the emerging buds with insulated tarps before getting hit with a “hard freeze.” While my spouse was busy worrying about his garden, I was busy drawing analogies to my life tending to the cultivation of young artists and burgeoning arts organizations. He’s sweating over climate change, and I’m trembling over the possibility of a seismic shift in arts funding. We all need to be vigilant—and philanthropic—to ensure that the arts continue to thrive, both here and nationwide. Many of the groups are non-profit and depend on your support. As Dolly Levi said, “Money is like manure. You have to spread it around encouraging things to grow!” Support the arts. It’s the right thing to do. All locations are Rehoboth Beach, unless otherwise noted.

CAMP Rehoboth Chorus—if you missed the largest vocal group in the state performing Come Fly With Me! you can catch the encore performance at Del Tech—Sunday, April 2 (3 p.m.). Tickets: camprehoboth.com. And if that isn’t a good day for you, see the same concert performed by the CAMP Ensemble at the Milton Theatre—May 5 (8 p.m.)—Tickets: info@pcade.com.

Capital Ringers (302-632-3106) are hitting the road with their spring concert Ringin’ Rhythms—April 22– May 6. Check their website for concert locations and times.

Clear Space Theatre Company (20 Baltimore Avenue; 302-227-2270) features the Broadway classic Gypsy—March 10-26. Their Spotlight on Young Performers series presents Once Upon a Mattress—April 7-9, and their new Acting the Classics group does a reading of The Importance of Being Earnest—April 9.

Ovation Dinner Theater (302-500-1528) presents interactive comedy and Murder Mystery Dinner Theaters all over the area—including Land Ho! a new show premiering at the Brick Hotel in Georgetown, Delaware on March 18-19. Check their website for other locations.

The Galleries at 20 Baltimore (20 Baltimore Avenue; 302-258-4203) hosts a fantastic collection of artists: Amandeline Gallery  featuring art by Victor Del Castillo, M. P. Gerald, Sergey Cherep and Nick Paciorek. Paintiques has “Painted Furniture Galore”! as well as a great selection of pieces. They can customize anything and do beautiful work. WibergArt and Studio 3 displays the work of renowned marine artist, Jack Wiberg, as well as the work of many fine local artists.

Painting With a Twist (17723 Coastal Highway; 302-313-5769) offers painting classes and “pARTies” for all occasions— days, evenings, weekdays, and weekends (age 7+). Visit their website for details.

Peninsula Gallery (520 E. Savannah Road in Lewes; 302-645-0551) has been busy “sprucing” up their gallery and has re-opened for a season of fantastic exhibits. From the Collector’s Closet—an eclectic mix of art by Chinese, Russian, British, and American artists is their current show. They also feature new works by Nick Serratore, and Duane Sabiston.