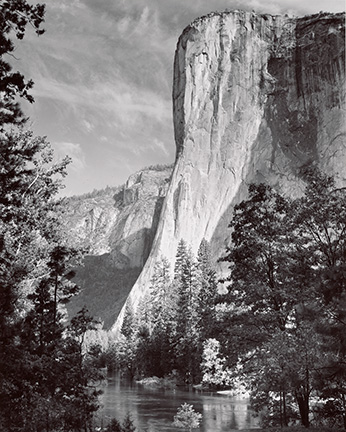 A Three-Month Festival of Photography and Conservation: May 5-July 30 at the Biggs Museum in Dover

His camera equipment weighed 125 lbs. and his “arduous hikes through non-cleared paths” were exhausting. But Ansel Adams, the indefatigable poet of light would then enter his dark room and emerge with the breathtaking and now-iconic pieces that today define him as synonymous with photographer.
So, before you walk another well-manicured path to a scenic overlook, to whip out your featherweight iPhone and immediately post that selfie on Insta-gram, come explore the icon who came well before iPhones and Insta-Anything. The special preview of the exhibition will take place at CAMP Rehoboth on Monday April 10 from 5-7 p.m.

Adams’ work was intended as much to encourage preservation of our environment as it was to stir our passion. An avid conservationist, believing in the immense responsibility for our extraordinary planet, Adams used his art to change hearts and minds. When he wasn’t busy stopping the construction of roads and refineries on the landscape, he was lobbying presidents from FDR to Gerald Ford and Jimmy Carter. He intended for people “to see that what now exists might soon be gone.” When he wasn’t in the darkroom or meeting with presidents, he was urging the Sierra Club to be more bold.

Focusing on the western part of the country where industrialization hadn’t yet taken its toll, he was surrounded by the great conservationists of the day, including Stephen T. Mather, the first director of the National Park Service. He was considered “the silent but most effective voice” for justifying the national park. The west coast, Monterrey, and Big Sur were his passion, but beyond the lower 48, he found time to preserve Alaskan lands as well.

The Biggs Museum director, Charlie Guerin, was responsible for securing the exhibition. Having headed the Center for Creative Photography at the University of Arizona, which Adams helped to create, he knew this blockbuster exhibition would be popular back east.

“To celebrate his early works, we have also curated some of that incredible 125 lb. photography equipment that was used circa the ‘30s and ‘40s—equipment that Adams would have used. Adjacent to Adams many works on display, it will bring his process into ‘clearer focus.’”

Guerin will showcase some of that equipment at the CAMP Rehoboth preview on April 10.

Photography clubs have enthusiastically engaged with the Biggs for this special showing, but it’s for anyone who appreciates the true art of the landscape.
Ryan Grover, the Biggs’ curator will also preview the many photographs that will be on display May 5–July 30, and discuss the narrated summer hiking tours throughout Delaware’s unique vistas—an homage to Adams’ exemplary leadership.

Biggs Museum board president, Marcia DeWitt offers that, “Adams converted millions around the world to the ‘visceral pleasure’ of his landscape photography and we are delighted to celebrate both his art and his conservation. Many of the artists on the second floor of the Biggs followed the same principles of demonstrating the limitlessness of unspoiled lands.” She adds, “So, I encourage visitors to avail themselves of the permanent collection during their visit—American artists including Albert Bierstadt and Thomas Cole are one floor above the Adams exhibition and pair nicely with the theme.”

Nestled on the grounds of the state capital, just 35 miles north of Rehoboth, the Biggs Museum of American Art is a year ‘round treasure for all Delmarva.