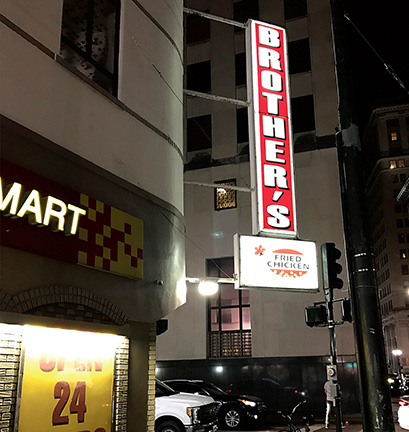 Confessions of a Convenience Store Connoisseur

I don’t have to tell you New Orleans is one of the country’s great eating and drinking destinations. While the choices may seem infinite, the rules aren’t. You can order a Manhattan with breakfast and nobody cares. Shoot, they’ll agree bourbon pairs well with bacon and then ask would you like another?

This laissez le bon temps rouler is exactly why I recently found myself laid up in a hotel bed the other night with a box of fried chicken thighs and a Miller Highlife tallboy after a full day of hobnobbing with writers at the Saints and Sinners Literary Festival in New Orleans. I was talked out and worn out and I just needed to take the edge off.

Now before you go and food shame me, you need to know it wasn’t just any fried chicken. No sir. The fried chicken came from Brother’s Food Mart, just up from the Quarter where Bourbon Street becomes Carondelet Street. Granted, the place looks seedy, but it serves up some of the best fried chicken in Louisiana according to Garden & Gun Magazine, so you know you can believe it. And, it’s open 24/7.

Brothers, in fact, appears on the Garden & Gun “Fried Chicken Bucket List.” And it should be. The skin is crispy and spicy. Even though it sits out under a heat lamp, the meat stays tender and moist. I couldn’t resist because not only do I love fried chicken, but also I have this strange predilection for convenience store cuisine.

Naturally, I blame this on my parents. When I was a kid we’d often drive from the mountains of North Carolina to Miami. Along the way we’d inevitably stop at Stuckey’s on I-75 for gas and hot dogs and pecan clusters. Anyone remember the live parrots and mynah birds at Stuckey’s? They added a tropical touch to the drive south. Then there were the Shell convenience stores that got me through college. Using my gas credit card, I could charge all sorts of sundries besides gas. I recall surviving one Spring Break almost entirely on Cool Ranch Doritos, Slim Jims, and Miller Lite beer from a Shell gas station in Ft. Lauderdale.

Today my convenience store habit of choice is the Royal Farms, of which there are many on the drive between Washington, DC, and Rehoboth Beach once you cross the Bay Bridge. Their fried chicken is sublime, and I’m not the only one who thinks so, as it too made Garden & Gun’s Bucket List as best in Maryland. But there’s more to Royal Farms than just fried chicken. I have little willpower to resist the Western fries, the Krispy Kreme doughnuts, and the Baltimore Berger cookies. There’s an entire display of milk, which moos when I open the display door for a small bottle of Cloverland chocolate milk.

Royal Farms, I was surprised to learn, traces its roots to this same Cloverland Dairy, founded outside of Baltimore in 1918. Cloverland delivered milk to Baltimore homes. In 1959 with home delivery on the wane, Cloverland opened a dairy story, which was the precursor to the Royal Farms chain now operating in 170 locations in Maryland, Delaware, Virginia, and Pennsylvania.

My partner Michael still remembers how his family would drive to the dairy after mass for ice cream. He and his siblings would stand there in their Sunday best licking ice cream cones and watching the cows get milked.

Interestingly, the other big convenience store in our area— Wawa—has a similar past. In 1890, a man named George Wood began the Wawa Dairy Farm in Wawa, Pennsylvania. He later began delivering milk to customer homes. As in Baltimore, changes in consumer purchasing of milk began to erode the home delivery business. In 1964, the Wood family opened the first Wawa Food Market. This started a chain of stores that predominately sold dairy products and which eventually evolved into today’s modern Wawa with more than 645 locations in six states.

Wawa, unlike Royal Farms, doesn’t serve fried chicken. Chicken tenders don’t count. Wawa’s claim to culinary fame is the hoagie sandwich, served hot or cold. Aficionados await each summer’s reduced price “Hoagiefest.” I like the seasonal Turkey Gobbler sandwich the best, a mix of turkey, stuffing, and cranberry sauce. I hold the gravy and add mayonnaise instead, just like my mother used to do.

Oh, I can just hear the disparaging comments. But you know, I don’t care. Eating for me is an adventure and, sometimes, like this, a justification for a story. Now if you’ll excuse me, I’m going to get back to that chicken bucket list….