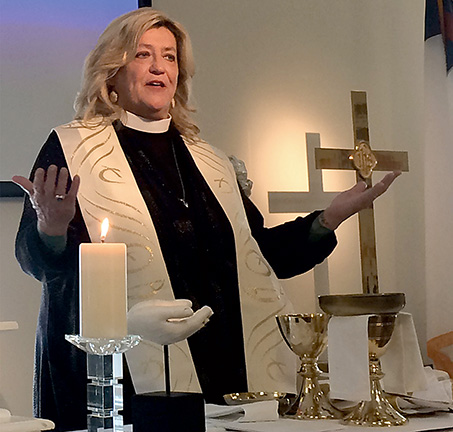 In February 25, 2017 when Rev. Elder Diane Fisher was installed as the new pastor at Metropolitan Community Church of Rehoboth, the congregation welcomed a leader who has served in every spiritual leadership role there is in the famed international Church—an organization rooted in and reaching beyond the LGBT community.

Diane Fisher’s roles within MCC include stints as an elder, district coordinator, bishop, and even running—and almost being elected—as the head of the entire MCC hierarchy.

Not only is the Rehoboth MCC welcoming someone of tremendous stature in the church, but also someone with a passion for human rights and social justice. Her experience includes working for LGBT inclusion in Eastern Europe, including time in Russia, Romania, Latvia, and the Ukraine. Along her way to helping to bolster human rights in less progressive countries, she has been arrested, jailed, and more happily responsible for opening dialogues about freedom of religion and LGBT rights. Her work led to the first Pride march in Bucharest and LGBT rights being enshrined in the Constitution of Moldova. In many of the places she visited, she was the only female clergy member people had ever seen.

Throughout her human rights activities she has been in awe of the young adults who stood their ground in dangerous situations. “The courage of these young people has been amazing,” she says, noting she has marched in situations where skinheads overpowered police and she was counseled to “remove your collar or be killed.”

“In Moldova, the KGB still existed, the police ran the state and they disappeared people. These young LGBT people risked everything.” In addition to her stateside MCC duties, Diane was very active in this social justice work in Eastern Europe from 2002-2011.

In 2016, when the position opened up at MCC Rehoboth, Diane was in the process of running for that very uppermost religious leadership position with the  MCC. She told Rehoboth’s MCC, “If I am not elected, please consider me for this job.”

In addition, she says, “I was honest with the search committee. I wanted to be very honest about who I was and let them know that I have a lot of tattoos, and I am very involved in social justice and LGBT issues.”

On that front, Diane has been in Rehoboth for less than 10 weeks and she has already gotten involved with the Henlopen High School Gay Straight Alliance organization and is about to work with Jewish Family Services and an interfaith coalition to bring some refugees to the area.

“Yeah, I’m pretty progressive,” she says, noting she was born in Canada, has worked with MCC for a quarter of a century and has led services everywhere from Tallahassee Florida (for a decade) to Northern Ontario in Canada and spots in between.

Why Rehoboth? “Well, it’s not as hot as Florida,” she laughs, “and I was really attracted to the job—I was called to the kind of community this MCC wants to be.”

MCC’s new pastor (or moderator as she is called) has settled in Angola, along with her partner, Rev. Dr. Kharma Amos, who is also part of the MCC family, involved in training MCC clergy. Diane is also a mom to a grown daughter whose dads are two gay men living in Canada.

“I already love Rehoboth,” says Diane and she looks forward to leading our local MCC and working for LGBT rights and social justice here in Sussex County.
According to pastor Jim Mitulski, a long-time colleague of Rev. Elder Diane Fisher, who preached at her installation, “This church is gaining not only an experienced pastor, but a skilled community organizer with national and international and multicultural experience, a creative leader who loves language and liturgy and most importantly who will love them passionately and lead them prophetically into the future.”

Welcome, Diane, the community looks forward to working with you!