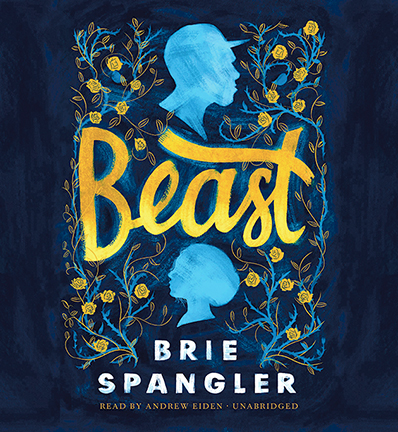 In its most basic description, it’s a muscle.

Nothing computerized, no easy-to-follow instructions or list of parts. Nope, it’s a muscle—a dub-thumping, miraculous group of cells that was beating when you were born, due to simple electrical activity. It’s just a muscle, although in the audiobook Beast by Brie Spangler, the heart knows who it loves.

At six-foot-four and 260 pounds, fifteen-year-old Dylan Ingvarsson was a beast.

And he hated it.

Not only did he tower over every single student and most of the teachers at St. Lawrence Prep, but he was also hairy as a fake-fur blanket. You might get teased, but you don’t get bullied when you’re like that. You don’t have a lot of friends, either, and you don’t get girls.

If it wasn’t for his best friend, JP, Dylan wouldn’t know what to do. They’d known one another since they were little and he was everything Dylan was not: well-off, well-groomed, and well-liked. Just walking the halls with JP made Dylan cool, though there was a bit of a dark side to JP’s friendship. Dylan hated that, too.

Her name was Jamie, she was the same age as Dylan, gorgeous, tall, smart, and she had the same struggles with the way her life was going. She only wanted to be friends, but he wanted so much more—partly because Jamie was funny and he liked her, partly because she liked him, and partly because she would prove to JP that Dylan could get a girl by himself.

But then everything fell apart. She said she told Dylan that she was transgender, but he didn’t hear that. Was she a dude? He wasn’t gay. She hadn’t hidden anything, hadn’t lied, but Dylan couldn’t get over facts.

And he couldn’t get over Jamie…

Two minutes. Get past the preliminary tracks in Beast, and that’s how long it will take before you’ll be eager to know more about Dylan. Author Brie Spangler gave him the right words with the right attitude, Andrew Eiden reads them perfectly, and you’ll genuinely like this kid with a tough exterior but a marshmallow center.

Spangler and Eiden make Dylan come alive in this boy-meets-girl-who-used-to-be-a-boy story, by giving him more than just one dimension. He’s a warm, responsible, and complex, well-crafted character; with Dylan, Spangler beautifully tackles a could-be-thorny subject, wrestles with its conscious some, then lets it do its own soul-searching. That leads to a new-old-fashioned love story that really couldn’t be sweeter.

Be aware that this audiobook includes a delicately-presented make-out scene that turns surprising, but not graphic. It might be controversial for some, but it fits, so don’t let it deter you. Start Beast, and you’ll (heart) it.