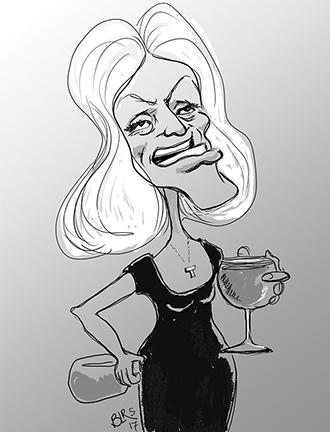 Cocktails for the Kleptocracy

Politics and drinking are inexplicably linked in the good ole US of A, even as far back as the American Revolution, which was fueled by beer and whiskey in taverns across the Eastern seaboard. Thomas Jefferson is said to have drafted the Declaration of Independence in the Indian Queen Tavern in Philadelphia.

American presidents have a history with drinking. George Washington distilled his own whiskey, as did Andrew Jackson. While Teddy Roosevelt grew mint on the White House grounds for the occasional Mint Julep, FDR mixed martinis every evening. LBJ loved to drink and drive. Richard Nixon was known to get all liquored up and engage in some “drunk dialing.”

Our current President doesn’t drink. Take a minute and let that sink in. It means all his appointments, orders, and crazy tweet tirades occur while he’s stone cold sober. I find that very troubling. In fact, I find all the members of this new Administration extremely disturbing. It’s a cast for a reality TV show rather than one to seriously help run the country.

Against this backdrop, permit me please to indulge in some creative bartending and present a menu of drinks to accompany this show we can’t stop watching. I call it “Cocktails for the Kleptocracy.”

The Kellyanne
Too many of these cocktails will make you batshit crazy, just like everyone’s favorite White House propagandist. Technically, this drink might not be considered a “cocktail,” but who cares about trite concepts like accuracy and honesty? The instructions are easy—pour 4 ounces of white Tequila into a wine glass and top with chilled Sugar Free Red Bull. “Yes, I’m drinking white wine, stupid… Can’t you see it’s in a wine glass?” Casually flip your hair and move on to the next lie.

The Jeff Sessions
This is a shooter crafted especially for all the Southern Republicans out there. Pour 2 ounces of peach flavored vodka and an ounce of condensed milk into a large shot glass. Gulp down the creamy white liquid and then place one Ritz cracker beneath your tongue. Face the South and genuflect. “Look away, look away, look away… Roll Tide!”

The Bannon
This shooter is similar in spirit to the “Jeff Sessions” but with a Teutonic rather than white trash twist. Add 1.5 ounces Jägermeister to 1.5 ounces of whole white milk and shoot. Many non-Caucasians are milk intolerant, so you Alt-Righters better pray real hard you don’t experience any belching, bloating, or flatulence or they might question your DNA and take away your membership card.

The Ivanka
This cocktail is a take on the classic G&T and inspired by the callous rich “beyotch” herself, who stays as cool as a cucumber under pressure. Into a cocktail shaker add: 1.5 ounces of gin, 5 cucumber slices, one quarter of a lime sliced, 6 mint leaves, and 1 ounce of sugar. Shake vigorously but not too. Pour the mixture over a glass of ice and top with Diet tonic water. Stir. Garnish with remaining cucumber slice. Smile girl and keep working that hubris cuz it sure looks good on you!

The Pollutin’ Pruitt
This shooter is the next best thing to drinking pure crude. Pour two ounces of Goldschläger into a large shot glass. Invert a spoon and place it near the top of the bottle and the edge of the glass. Slowly pour in one ounce of Jägermeister. This technique allows the dark Jägermeister to settle on top, just like an oil slick! Admire its beauty then roll up those sleeves and roll back some more environmental regulations for the Koch Brothers. Clean water and air are so overrated.

The Spicer
This cocktail is a riff off the traditional “Dark and Stormy” because aren’t all the Trump White House briefings just that? Start by pouring two ounces of spiced rum into a to-go plastic tumbler, one that won’t break should you feel compelled to fling it at someone in order to emphasize your point or if you need to go hide behind the bushes when reporters ask tough questions. Fill with ice and top with ginger beer.

The DeVos Depth Charge
This drink honors the billionaire lobbyist who is way out of her depth as the nation’s new Secretary of Education. Order a draft beer and a shot of root beer schnapps. Take a few sips of beer then drop the entire shot glass into the beer mug. Chug. Now go blow up the public education system the same way you did in Michigan.

The Trumptini
Last but not least, I present the “Trumptini” — the piece de résistance of this drinks menu and a testament to the leader of our kleptocracy. Though it sounds unbelievable, this particular cocktail is not made up. According to my Internet research, it’s been proudly served for over a decade at the Trump International Resort in Miami Beach. Add one ounce of rum, one ounce of Cointreau, fresh lemon juice and cranberry juice into a shaker. Give it a good shake and pour out into a salt-rimmed martini glass. Layer a scoop of red Atlantic salmon caviar on top. If that wasn’t revolting enough, garnish with a lemon peel in the shape of a “T.” That’s a “T” for Trump, not for tacky, just in case you were wondering.

So there you have it, friends, cocktails inspired by the characters in season one of the Trump reality show. And we’re just over a hundred days in! The next 1,360 are going to be tough ones, so let me leave you with some words of advice: Corrupt politicians may come and go, but liquor tends to soothe the blow.
Cheers!

Rich Barnett is the author of The Discreet Charms of a Bourgeois Beach Town, and Fun with Dick and James. More from Rich Barnett. Cartoon by Bill LaRoque.