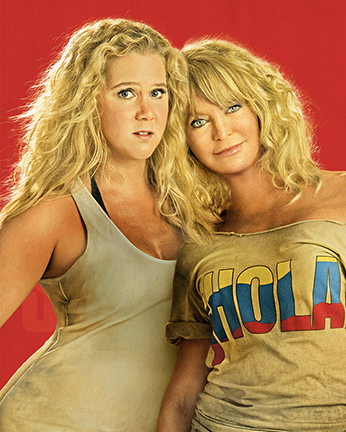 “We’re serious bitches too,” says Amy Schumer, nearly in tears. The comic is seated next to national gay-loved treasure Goldie Hawn, and the screen icon has just made a touching revelation: She used to comfort men dying of AIDS.

Perhaps that isn’t the kind of heartwarming reveal you’d expect during a sit-down for their action-comedy, Snatched, but as this onscreen mom-daughter duo joke about a potential gay-themed sequel (the ladies already have several queer-centric working titles; for Schumer, the joke writes itself), it’s clear nothing is off topic. They’re just happy to be here speaking to gay press, which has Schumer “very elated.”

“This will be our favorite interview of the day,” the 35-year-old raves from a hotel bungalow in Santa Monica. Beaming, Hawn shares her enthusiasm: “It will be!”

Snatched is Hawn’s first movie since 2002’s The Banger Sisters. But donning a signature frilly, shoulder-less, royal blue dress, it seems like just yesterday the 71-year-old’s frothy charm enraptured gay audiences on Laugh-In in the late ’60s, and later, in 1996’s First Wives Club and, of course, Death Becomes Her, in 1992.

“It’s fun doing press with her,” says Schumer, as Hawn, en route, recharges at the hotel’s nearby buffet line before breezing in. “It’s also relaxing, because she’s like a mom—you’ll ask her something, and you’ll be looking for a sound bite and then we’re out of time and I’m like, ‘OK, cool. Good job.’”

Before being snatched up for their next interview, Hawn and Schumer got real about their respective gay followings, how Hawn thinks Schumer still has time to pursue a lesbian relationship and their commitment to “fight to the death” for LGBT people.

Why has it been important to you both to advocate for the LGBT community, especially now, in this political climate?

Schumer: I can’t remember a time I didn’t. When I was in high school, people weren’t really out yet. I think it’s more now. It was a different time even then, but it was never a question. It was never a choice. It was, “Yeah, of course.”

Hawn: Being an ally for LGBT people and an ally for all people, transgender or whatever—to me, that’s a human story. I feel there are injustices in the world that I’ll stand up for, and I think that it’s important to realize that the world is filled with these kinds of issues. We’re dealing with intolerance and what’s going on with deportation and what’s happening with Mexicans and what’s happening with people who are Muslim. There are so many things, and if you can’t stand up for it, then you’re not standing up for humankind. Because that’s who we are. We all have skin and blood, and we’re all made of the same things. I have a note that I will probably needlepoint one day: “Love knows no gender.” And it doesn’t. Love is something in the heart and in the mind, so why would you chastise anyone for that? And this is something that I feel very strongly about.

Schumer: Also, we’re both people who will stand up to the death for our gay friends and gay people and what’s going on in Chechnya and the fear of what will happen in the coming years. We’ll be there to fight alongside our gay friends.

Hawn: You know what I used to do? This is interesting. When we went through the AIDS period, it was a very scary time, and I would go visit guys and I’d get in bed with them just to be there with them.

Schumer: Come on, think about that.

Amy, on behalf of gays everywhere, thank you for being instrumental in bringing Goldie back to the big screen.

You were missed, Goldie.

Schumer: Dude, yeah. I completely agree, and I feel the same way. I just stayed on her, and we did it together.

Hawn: You were the one, I gotta tell you. It really was Amy.

When in your career did you two first know you had a big gay following?

Hawn: Gosh, honey, this is a long time ago. I think when I first came on—it started then. The early days. There wasn’t a moment in my career, never a moment. I was a dancer, and I grew up, and that’s who I was. There was no issue. I mean, I had a tremendous amount of gay friends, so my whole life was basically like that while dancing. So, I never noticed who was gay or who was straight. For me, it was like that.

Schumer: I’ve been on the road for 15 years. What I would do after shows is go dance at gay bars, and I started noticing, because even the worst towns have a fun gay bar, people being like, “We were at the show.” I remember it was a realization for me going on the road. And I’ve had a bunch of gay couples say, “I wanna propose at your show,” and I get really psyched! Ha! You’re like, “Yes!” Not because, “Oh, good, that’s a market”; it’s like, that’s who you want to love you. I feel really grateful and lucky, and the love is mutual.

Hawn: A really good friend of mine, who is gay, married her girlfriend and they wanted to get married in my house. All our friends were there, and it was the most beautiful thing. It was just so emotional, and (my son) Oliver, who is 40 now—at that time he was about 20-something—basically went, “Mom, I want a gay marriage!” Ha! I was like, “I know! It’s so beautiful.”

Schumer: I’m always walking around in every town I’m in and I’ll find a park, and there are always people having their engagement pictures. I’m like, “Can I be in this photo?” I want in on the fun!

As someone who used to dance in gay bars, were your dance moves in Snatched gay-inspired? And how about Goldie’s?

Schumer: Oh, definitely. Also, just to watch Goldie dance is one of the great joys of my life. Honestly, to see that live.

Goldie, with your dance scenes in this movie, were you having flashbacks to your iconic dancing in First Wives Club at that lesbian bar?

Hawn: Oh, right! I danced in a lot of movies! It’s weird but it happened and it’s good.

Schumer: To have you not dance in a movie is a crime.

Both of you have experience in a lesbian bar. Goldie in First Wives Club, and Amy, you were a bartender at one before your comedy career took off. Is this maybe a potential jumping-off point for a second movie starring both of you?

How do you think this film may resonate with gay people and the relationships they have with their parents?

Schumer: I definitely haven’t thought about how different sort of lifestyles could experience it because it does feel pretty universal, but I get it. I think it really will bring together people who have had a struggle with a parent—that idea of, we’re both doing the best we can.

As kids, you’re just so, “Oh, my mom just loves me.” We all take our parents for granted, and the goal is to be able to accept that they just love the shit out of me and did the best they could. And maybe it wasn’t enough, but (it’s important) to find peace for yourself in that and to get rid of some of the anger. I hope this movie brings kids and parents together—I think it will.

Hawn: The other thing you’re dealing with is a very strong rejection and it is arguably very, very important to find forgiveness. This movie may or may not touch a little on that, but we’re talking about a relationship between a mother and a daughter. It’s kind of like a fraught relationship, and we do get into it. I’d like the idea that perhaps whether you’re gay or not that you’re able to go in and say, “Maybe I should call my dad, maybe I’m gonna call my mom.”

One of the realities is that if you don’t make peace, they’re gonna die one day, and it’s really important to know that, because moms and dads don’t last forever. If you’ve got unfinished business, we need to face that, and that’s not easy. And a lot of parents are stoic and won’t give, and if they don’t give it’s a very sad story, because you know why? Every child wants to love their mother and their father. Love is the most important thing, and when they feel rejected and unloved that hole can never be filled by anyone else.

Amy, in the movie, you tell your brother that he’s “so gay for mom.”

Schumer: I wondered what the experience would be of that line.

Who are you gay for in your lives?

Schumer: I’m gay for so many people that I think I may be just gay.

Schumer: I love my girlfriends so much that I’ve kissed girls—but I’ve never had, like, a lesbian experience. Not yet. But I’m sure. The life is young.

Hawn: I was gonna say: There’s a lot of time!

Schumer: There’s time left. But you know how you just think your friends are so beautiful, and (with) my really good girlfriends, over the years I’ve had confusing feelings because I just love them so much. I just think they’re so beautiful, so I’m gay for my friends.

Naturally, Goldie, everyone around you is gay, and with a résumé that includes First Wives Club and Death Becomes Her, I’d expect nothing less. Which of those films do you think earned you the most gay cred?

When did you realize that it was adored by gay audiences?

Hawn: I never thought of it! But I love that.

Schumer: I hope this becomes a gay cult movie.

Hawn: That would be awesome!

I mean, basically anything that Goldie touches, right?

Hawn: Well, my god, that’s quite a compliment.

Schumer: We should all be so lucky! 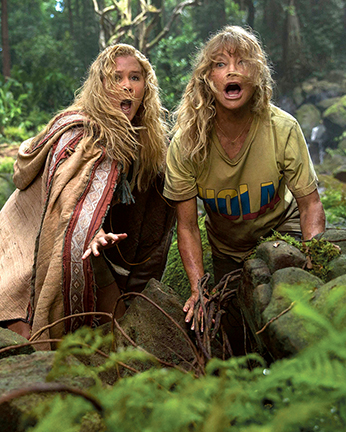