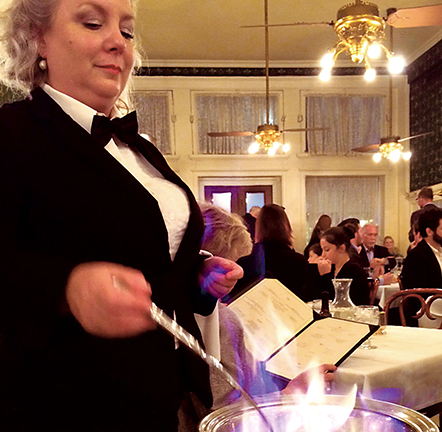 A Different Kind of Buzz

Coffee and cocktails. I like ‘em both. So why has it taken me so long to develop a sophisticated appreciation for combining these two powerful stimulants together in one glass? Truth be told, coffee cocktails and I have never gotten along well.

I remember one evening with way too many White Russian cocktails at the La-Te-Da Bar in Key West. It involved a snappish Chihuahua wearing a tutu and pearls, blood, and someone taking a nap in a dumpster. Then there was the bitterly cold afternoon at the Yale Bowl when drinking a dozen or more coffees spiked with Southern Comfort seemed like a stellar idea until yours truly attempted to run off with “Big Bertha.” No, she wasn’t a chubby coed. She was the eight-foot wide bass drum on wheels the Harvard marching band hauls around to football games. Another bout with the Irish coffee led to a sprained ankle and my flip phone run over by a crazed redneck in a jacked-up SUV. I could go on with the stories involving this particular concoction, but they’re just too embarrassing….

My decision to reacquaint myself with the coffee cocktail began in an establishment on Bourbon Street in New Orleans’ French Quarter. I know what you’re thinking, but Galatoire’s is an old school, white-tablecloth Creole restaurant serving up classics such as Oysters Rockefeller and eggplant stuffed with crabmeat and shrimp and smothered in béchamel sauce. It’s a scene, especially on Friday for lunch when the demimonde comes out to play. The waiters are all in tuxedos while the guests slum it in bowties, seersucker, big hats, and lots of jewelry. It’s colorful, to say the least. And as the liquor flows so do the guests, from table to table, gossiping and visiting and visiting and gossiping. It goes on for hours. And no meal is complete without the flaming finale known as café brulot.

Café brulot is a thick, sweet coffee with deep citrus and clove flavors. Cocktail historians say it was invented during Prohibition to mask the brandy and orange liqueur. Like many things in New Orleans, café brulot is a ritual. It requires its own silver bowl and a long handed ladle. The liquor is poured into the bowl along with some lemons, cinnamon sticks and then filled with hot, fresh-brewed French roast coffee. The waiter ignites the coffee liquor mix and then using the ladle and a spiraled peel of orange plays them together like an instrument to create a mesmerizing ribbon of blue-gold flame.

While you cannot order café brulot in Rehoboth, there are a couple of excellent coffee cocktails I highly recommend. Bartender Matt Urban, formerly of the Blue Moon, mixes a big boy drink using Frangelico, vodka, Kahlua, and espresso. He chills it down and serves it over ice in a standard rocks glass. Keep an eye open for him at the Purple Parrot or in the Iguana Grill re-do on Baltimore Avenue. Another popular coffee cocktail is served by none other than bartender extraordinaire Holly Lane at Café Afrazan. Her Espresso Martini sounds simple—shake real pressed espresso and two kinds of vodka together with ice—but the end result is pure lux.

Whenever I write about cocktails there comes a point where I like to roll up my sleeves and make one myself, usually trying out some wacky recipe that catches my eye. For this particular subject, I thought I should re-visit my old nemesis Irish coffee.

Invented by a bartender during WWII at an airbase in western Ireland, the Irish coffee is probably the most popular coffee cocktail in the world. And the secret to a great one is to use good Irish whiskey and good rich coffee, neither of which I tend to drink. Confession: I favor cheap coffee and Kentucky bourbon. Not to be defeated in this endeavor, I hopped on my bicycle and pedaled a few blocks to Starbucks and ordered a Café Misto, which is basically coffee with steamed milk. Back home, I cracked open the red wax seal of a bottle of Maker’s Mark and poured a healthy shot of bourbon into my paper cup. I felt desperate, like a man of low degree. But it tasted good.

That’s what’s so odd about the coffee cocktail. When you think about it, alcohol and coffee shouldn’t mix. Conceptually, they’re diametrically opposed. Alcohol is relaxing. Coffee is stimulating. One dulls the senses while the other heightens them. You might assume they would balance each other out but that’s not the case. Spiked coffee instead produces a unique buzz, one where you feel alert and alive and every idea sounds good. My advice, though, is to enjoy coffee cocktails in moderation or you may find yourself buying hideous but expensive artwork or singing “Delta Dawn” at a karaoke dive bar.