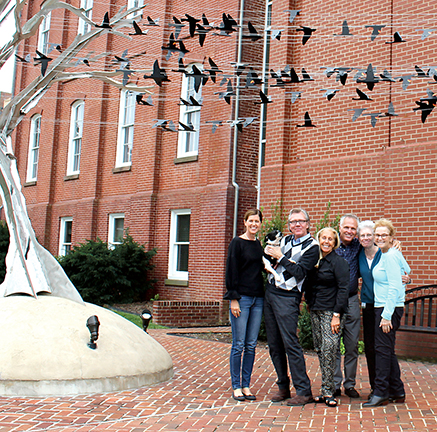 Rainy Days and Sundays Always Get Them Up (to Dover)

Picture it. Sundance Auction, 2017: Susannah Griffin circled the auction clip board like one of the Biggs famous birds, making certain her bid was the last and the highest.

“The museum tour really caught my eye. I have always chosen experiences over ‘stuff’ and I loved that this was a group outing!”  The field trip had an expiration date since the Christo and Jeanne Claude exhibition was concluding in late October.  So Susannah and her partner Joyce began organizing their friends and booked the director’s tour with the precision and organization for which they’re both known.

Raising money for CAMP causes, awesome. Tapping into culture, enriching. Doing so with your friends, priceless.

“I was particularly interested since I didn’t visit The Gates in 2005 in Central Park and have regretted that ever since. I was downtown in NYC on 9/11 and at the time of The Gates, I was still gun shy about walking around the city and in public places. In hindsight, it likely would have been very cathartic and healing for me to view—as art always is.”

While The Gates is the perhaps their most well-known public art, Christo and Jeanne Claude have wrapped bridges, buildings, the islands off Key Biscayne and in Berlin, Germany amazingly pulled off The Wrapping of the Reichstag. And all of it was chronicled at the Biggs.

Fortunately for the CAMP cadre, there was a Christo and Jeanne Claude expert awaiting them in Dover. The Biggs Museum Director, Charlie Guerin had worked with them at several junctures over his four decades in the field, so no one was better prepared to usher the group through the exhibition. His narrated tour illustrates compellingly the love story that made them a truly dynamic duo. Jeanne Claude’s pivotal role shines through every project, and her contributions to the mammoth projects shines through every piece—avoiding the old cliché that “Ginger Rogers did everything Fred did, backwards and in high heels.” Jeanne Claude got her due credit in real time. She preceded Christo in death and he played Mozart at her funeral because she believed it increases the IQ. Guests at her memorial emerged smarter than when they arrived.  She was a magenta-haired woman enriching lives even in death.

Observes Susannah: “I think that people, especially women like Jeanne Claude are often overlooked and marginalized in the art world. It is clear to me that Christo felt she was an equal and co-creator; therefore history should remember theirs as a true partnership.”

Marquee exhibitions like this one tend to “spike” attendance at museums, but to “keep the music playing” after the visit, Guerin is committed to showcase Sewell Biggs’ impressive permanent collection on the two floors above. So ascending the stairs, the group happily follows. “My favorite part of the Biggs upstairs was the sense of time flowing through the art and the rooms—from the 1700’s through today. It is a wonderful place that people should discover!”

Marcia DeWitt, president of the board and Rehoboth resident, is thrilled with the collaboration: “Ever since my neighbor, the late Dick Poole introduced me to the Biggs, I’ve taken the trip every time family or friends visit. When I became board president, I set out to make certain my personal network and anyone in Sussex experience this gem. Having welcomed the CAMP Rehoboth board to our gala last year, we’ve blossomed in our collaborations. I’m delighted this continues to flourish. I only wish I could have escorted the group.”

Before the group headed back Rehoboth, lunch was served in the Bigsby Kids Center and the conversation centered on the museum’s outreach to students, particularly those from low-income settings. As a networking phenom, Susannah mentions “My sister-in-law Krista co-founded Minds Over Matter, which deals with at-risk kids. You should connect with her as M.O.M.’s education programming might be a great fit with your delivery of art education.” By the following week, a meeting had been set with Krista Griffin and her curriculum specialists at M.O.M. Kids in the first state will likely benefit from this serendipitous potential collaboration.