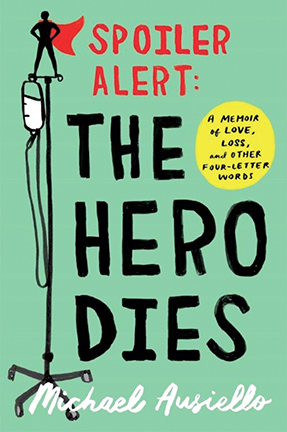 Just like in the movies, you’d planned to grow old together.

You’d be the couple everyone smiled at: two wrinkled beings, holding hands, fussing good-naturedly at one another. Still in love, like the movies, til death do you part—but then, as in the new memoir Spoiler Alert: The Hero Dies by Michael Ausiello, someone changes the script.

When Michael Ausiello spotted Christopher “Kit” Cowan at a New York event for gay athletes, it was lust at first sight. At six-foot-something tall, bespectacled Kit was geeky-sexy—just Ausiello’s type and, although they kissed and kissed some more that night, their first date was near-disastrous.

They were different in so many ways: aesthetics, family, childhoods, and personalities. Ausiello thought Kit had amazing style; Kit could barely get past Ausiello’s Smurf collection. As time passed, they told one another “olive juice,” (which looks like “I love you” when whispered), and adopted a cat, endearing nicknames, and couples-language. Kit helped Ausiello overcome his bullied past; Ausiello learned not to wake Kit too early. They moved in together, conquered relationship crises, moved out together, and sought counseling.

They wanted things to work. This was for the long-term but, just over a decade into their relationship, there were more challenges to weather: having endured bowel problems for some time, Kit was diagnosed with a fist-sized, cancerous invader in his rectum, yet there was hope. They’d heard neuroendocrine tumors were rare, but responded to treatment.

Their third second-opinion doctor told them otherwise: Kit had a year to live.

How do you advocate for an ailing loved one?  Ausiello, a writer and TV critic who’d lost his beloved mother to cancer, learned to be fierce on Kit’s behalf.

How do you make every minute count? After being told he was going to die, Kit married Ausiello in a City Hall ceremony that came perilously close to not happening. It was followed by a memorable honeymoon, and chemotherapy.

How do you watch someone you love suffer? How do you say goodbye?

Of course, you know how this book ends. It’s right there in the title, so you’re probably not surprised. The first thing you’ll want to know, though–especially if you’re prone to cry—is that Spoiler Alert: The Hero Dies is not a book that will leave you howling. Author Michael Ausiello jumps right in with humor on page one of his story—a sassy, snarky kind of funny that’s endearing because it’s not mean-spirited—and that carries throughout.

That’s not to mitigate the sadness or seriousness of what happens here, however: the humor sometimes feels thin, as though Ausiello is protecting his readers from the full brunt of the horror of watching someone fade away. There’s an attempt at lighthearted at that point but you’ll see through it, and know better.

In his last pages, gift-like, Ausiello leaves readers with a perfect movie image despite that Spoiler Alert: The Hero Dies lives up to its title. Yes, you will cry. No, you shouldn’t pass on it. And that’s a wrap.