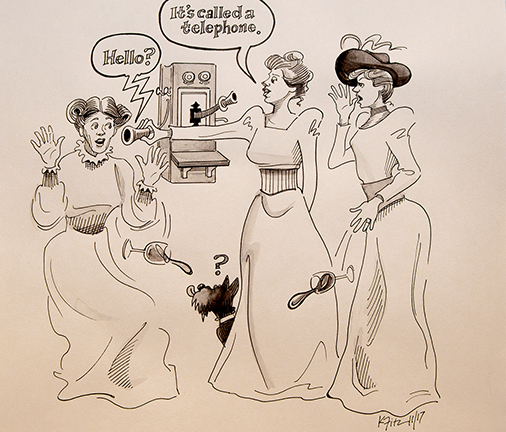 Artificial Intelligence scares the hell out of me.

I first creeped out over the subject back in 2001 when the film AI Artificial Intelligence, about a boy robot gave me night terrors.

But I recently got the yips realizing what was then, is now. The age of artificial intelligence, or AI for short, is already here, making decisions for us on facebook, cell phones (Siri and her pals), and with Alexa, Dot, and Echo. In Saudi Arabia, a robot already has citizenship and more rights than the country’s women. Who’s surprised?

A bunch of lesbians of a certain age discussed this last night, noting it’s a good thing we won’t be around half a century from now when robots rule and humans become their hourly employees. Nope, don’t want to be here for that.

It made me wonder if after Columbus set out, did my 13th century friends of Sappho sit dipping into garbanzo beans and hoping they wouldn’t live long enough to sail off the edge of the flat earth?

Did 17th century crones worry about an invention called the barometer?

“Who needs it?” somebody said, “when our aching knees tell us all we need to know? Maybe if somebody invented a way to replace these old knees, ha, ha, ha, we’d need an instrument to tell us it was going to rain, ha, ha, ha. But people will land on the moon before that’s going to happen! Ha, ha, ha.”

“Although,” said one woman, “I favor tasting that new bubbly stuff the loony Benedictine Monk Dom Perignon invented. Let’s try it Friday between 5 and 7 in the afternoon. There should be a special name for that happy early drinking hour.”

By the 18th century, a flock of renegade “spinsters” congregated for game night while burning incense amid dozens of flickering candles, somewhat comforted by the recent invention of the fire extinguisher. But they worried about that crazy Ben Franklin flying a kite in the rain and discovering some stupid way to knock himself silly. “That’s good for nothing!” somebody yelped as they snuffed a candle.

Meanwhile it was 1880 when some unmarried sporty gals kept house in pairs, in what they called Boston marriages. One night, a group congregated for cider and hummus to see a friend’s newly installed telephone machine. They stared at the giant wooden box. “Oh my, people down the street can talk to you in your own home. Next thing you know strangers will call trying to sell us buggy warrantees or bank services!” A woman added “Well, good thing it’s attached to the wall inside and won’t bother us in our carriages.”

“Or bother you in the outhouse!” said another. “Can you imagine such a horrid thing?” Her faithful dog, the newly AKC recognized mini-Schnauzer nodded in agreement.

In the 1940s, in Greenwich Village, a no-nonsense woman sat with her female lover, reading The New York Times. “Oh what a relief!” she said, “According to this article, the term ‘lesbian’ is favored for us now, instead of that nasty clinical term ‘sexual invert.’ Now if we could only get rid of those awful smears people hurl at us. I never want to hear the words queer or dyke again!”

“Don’t worry,” said her girlfriend, “those slurs will go out of fashion. But it’s sad we’ll never, ever be able to marry like our heterosexual friends.“
“Yeah, homosexual marriage has as much chance of happening as First Lady Eleanor Roosevelt has of being proclaimed a lesbian!” Both women burst out laughing.

In the 1970s a tribe of gay girls trekked through the Michigan woods complaining about the new cork-soled German sandals everybody was wearing. “These things are killing me,” said a nearly naked gal on her way to the drum circle and potluck. “Good thing these shoes are just a fad!”

Okay, so now it’s the waning days of 2017, with everyone agreeing the earth is round, Birkenstocks are here to stay, hummus is a lesbian staple and we can marry whomever we love. The gals talk about their various stages of knee replacements, stare at their ever-present cell phones, and try getting used to calling themselves dyke, queer, gender fluid, or other alphabetical additions to the LGBT acronym.

We agree that the world managed to get used to more than 20 centuries of scientific inventions and societal changes, I guess we’ll make peace with artificial intelligence, too.

I look to the day when I can sit with my Schnauzer Windsor, watching my Roomba clean the house, as I sip Dom Perignon poured by my robot bartender, while Siri or Dot take turns writing this column. When my phone rings, I can’t wait to hear what Alexa says to robotic Heather from Card Services.

Have at it, kids. And let me know if you want any hummus.