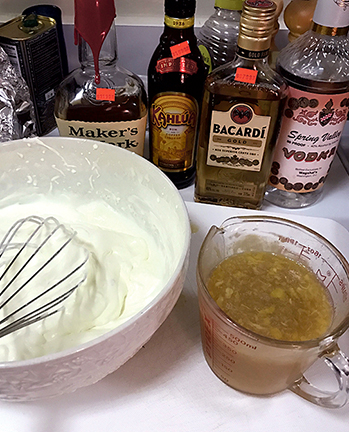 Eggnog is a somewhat contentious drink. People seem to love it or hate it. For most of my life, I was a hater. This is probably because I was brought up in a “fruitcake family.” Eggnog or fruitcake? Baptist or Methodist? The families I knew were one or the other, but normally not both.

To me, eggnog was this sickly sweet concoction with the consistency of latex paint that was foisted upon consumers over the holidays. Along with menacing nutcrackers and car wreaths, it miraculously appeared in the grocery stores and in Starbucks coffee right after Halloween and then vanished after New Years as quietly as it arrived. And all those calories! A venti-sized Eggnog Latte at Starbucks will run you 620.

My relationship with eggnog, however, changed one night a couple of years ago. I was attending a swank holiday party in Rehoboth and the hostess was trying to sweet-talk me into trying her homemade eggnog spiked with a lot of bourbon and a little dark rum.

“It sounds very tempting, but, no,” I politely protested. “I believe in fruitcakes.”

She whispered seductively in my ear: “John Waters likes my eggnog. He even sends me his annual Christmas card.”

Decades of resistance crumbled and I accepted a cup topped with fresh ground nutmeg. Many cups later I was in my cups, swaying in the middle of a dazzling forest of vintage aluminum Christmas trees bathed in an ever-changing spectrum of purple, gold, and red lights. Extension cords were everywhere and visions of falling Christmas trees danced in my head. That I managed to make it out of the forest without an incident was truly remarkable. What’s more amazing was my newfound appreciation for eggnog. Why had I been so vehemently opposed to it?

Eggnog is generally believed to have originated in England centuries ago as a hot wintertime drink for the aristocracy. American colonists began drinking it in the 1700s as milk and eggs became common staple foods. They mixed it with rum, which was plentiful and relatively cheap, and later with home grown whiskey. Some etymologists claim Colonial Americans created the name, a derivation of the word grog, which meant a thick drink.

It wasn’t long before spiked eggnog evolved into an American Yuletide tradition. It was so popular, according to an article I read in Smithsonian Magazine, that cadets at the US Military Academy went on a rampage and trashed their residence hall when the Academy Superintendent banned whiskey and eggnog from Christmas celebrations in 1826. The Eggnog Riot they called it. Robert E. Lee and Jefferson Davis were among the rebels that Christmas Eve. Obviously, these boys had problems with authority early on….

George Washington, I learned during my research, was an eggnog enthusiast. He and Martha were well known for their holiday parties and their special recipe for eggnog spiked with dark rum, rye whiskey, sherry, and brandy.

Naturally, it got me thinking I should follow my own path and make my own eggnog. How hard could it be? The stuff consists essentially of sugar, eggs, and cream. If a bunch of West Point cadets could whip up a batch back in 1826, then a boozehound like me ought to have no problem.

There are plenty of recipes out there for eggnog. I knew I wanted a nog with simple ingredients and few added flairs like cinnamon or nutmeg. So now, without further ado, let me present you with my recipe. It will make enough for 3-4 people casually sitting around sipping a glass or two.

Step One. Into large Pyrex measuring cup add half a cup of plain white cane sugar and one cup of the Kentucky bourbon of your choice. Stir it gently until the sugar dissolves. It takes a while. Cover it with aluminum foil and put it in your refrigerator for a couple of hours to set and cool. This mellows out the bourbon.

Step Two. Separate out three egg yolks into a bowl. Whisk for about five minutes. Fold the egg yolks gently into the cool bourbon and sugar mixture. Withstand the urge to whisk the whole contents. Cover the Pyrex with aluminum foil and let it age in the refrigerator overnight.

Step Three. The next day, add two cups of heavy whipping cream into a bowl. Bring out the whisk and go to it. Most recipes say to whisk until the whipping cream gets stiff. I suggest you whisk right up to the point where it just begins to stiffen or else it becomes like drinking whipped cream.

Step Four. Fold the bourbon mixture into the whipped cream and stir gently until mixed. Pour into small roundish glasses and serve as is.
For decades, my dogmatic thinking kept me away from eggnog. How stupid was that? This column, I hope, will encourage you to not make the same mistake I did, rejecting for all the wrong reasons a delightful holiday cocktail. There are such riches out there if we are only brave enough to open our eyes, or in this case, our mouth. Happy holidays. 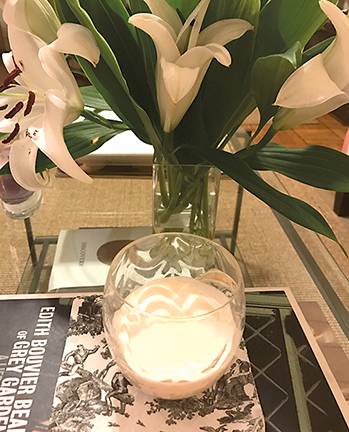