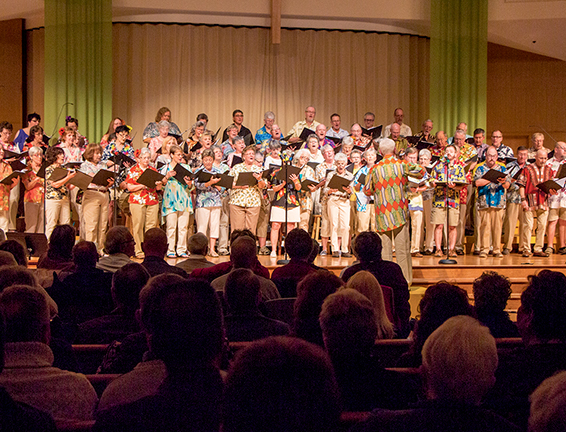 Quick Question: What has 182 feet and hands, and yet is considered as being one body? Comes from a multitude of places, but is known for having its eye on a single goal? The answer is simple: the CAMP Rehoboth Chorus, based in Rehoboth Beach, Delaware. The 91-member chorus, led by Musical Director Doug Yetter, is focused on bringing high-quality musical entertainment to the community. Right now that means working on their next concert series titled Can’t Stop the Beat. The show will make its debut the weekend of February 9-11, 2018, with concerts being held at Epworth United Methodist Church (19285 Holland Glade Road, Rehoboth Beach). An additional concert will be held on April 8, 2018 at the Sussex Academy, on Route 9 just east of Georgetown, Delaware.

Can’t Stop the Beat is a celebration of song that includes blues, rock and roll, jazz and more. The program will include such sentimental favorites as “With a Song in My Heart” and “One of Those Songs,” contemporary tunes like “Listen to the Music” and “Piano Man,” Broadway show-stoppers like “Music of the Night” from Phantom of the Opera, and the always popular Leonard Cohen’s “Hallelujah.” The wide variety of music means there will be something familiar to every audience member, but it is also an opportunity to introduce people to songs that they may have never heard before. “We span 106 years of music in this concert,” explains Doug Yetter. “The earliest piece is ‘Alexander’s Ragtime Band’, which was written in 1911, and the most recent one is ‘Sing’, a song made popular by acapella vocal group Pentatonix just last year.”

While Yetter may be waving the baton in front of the group, the CAMP Chorus is clearly not a one-man show. Chorus members take an active part in the process from start to finish. The seventeen members of the Chorus’ “Music Committee” came up with the theme of this year’s show, brainstormed song selections, and researched musical arrangements. The committee set a musical vision for the show, and they entrusted it to Doug Yetter to make all the pieces work together. The concerts again this year will feature some of Yetter’s trademark song medleys, as well as a couple of surprise singers from the community. CAMP Chorus President David Scuccimarra knows that the chorus is up to the task. “It is challenging and rewarding to lead a mixed group like this,” David explains. “The group is large and enthusiastic. Each vocal section is always prepared to learn new and often intricate arrangements. Members are eager to rise to the musical standard that Doug sets.”

The CAMP Chorus presents music as a fun, shared experience for both singers and the audience. Their performances are more “good times for everyone” events than are more traditional concerts. However, that does not mean that the music won’t be top notch. “It takes a lot of rehearsals, coordination, collaboration, fundraising, and behind the scenes effort to make a show like this come together,“ says Chorus member Dan Foskey. “Our members not only get to learn new music but they also get informal vocal lessons and music reading lessons. They also learn the history of most of the music from Doug's vast knowledge from his lifetime of being involved in the music industry and theater.” The chorus members’ work doesn’t end there, either. “The Chorus is challenged to meet the musical goal for each concert season,” explains David Scuccimarra. ”Doug Yetter sets the goal for the concert and focuses on a component, such as sound or dynamics. This raises the bar for a performance.”

One would expect a paid, professional musical group puts in this sort of time and energy into a concert series. The surprise with the CAMP Rehoboth Chorus is that its members are not paid. In fact, THEY pay to sing through the membership fees they pay to be in the group. Even more surprising is that the CAMP Chorus is a non-audition group. Some of the Chorus members have a musical background, while others do not even read music! Any and all singers are welcome, as long as they love to sing and are willing to work. “The beauty of this group lies in the fact that every member puts a 100% into the effort to produce a wonderful performance,” adds Scuccimarra.

The sentiment is echoed by Chorus member Dan Foskey. “I like singing in this chorus because of the diversity of the members. It is great getting to know them through various chorus activities such as rehearsals, socials,, and outreach concerts. Not to mention the sincere joy of being able to sing with a group like this and to learn new songs of many different genres, eras, and cultures. Our members are truly dedicated to spreading the joy of music all year round to this and outlying communities through our concerts, outreach, and local community events. We come together as a choral family with one common goal to spread the joy of music and share it and we hope it enriches people's lives as much as it does ours.”