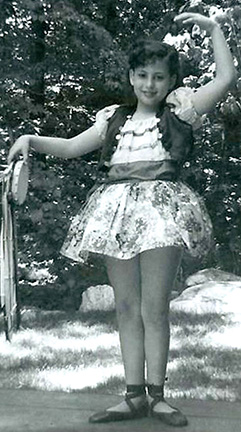 I never thought I’d be involved in a martial art. The closest I’ve ever come to performing Tai Chi is drinking Chai Tea.

So imagine my surprise at finding myself at the CAMP Rehoboth Community Center in a Tai Chi class, learning the art of making a fist and practicing movements based on Kung Fu.

Kung Fu? My only reference is the old Pink Panther movies where Inspector Clouseau’s manservant Cato Kung Fu’ed both the inspector and his surrounding apartment to rubble.

And no, as pissed as I am about our political plight, I am not gearing up to take to the streets for hand to hand combat— although there are days it feels like it might come to that.

So there I was, coincidentally dressed in black and white, looking and feeling much like that Kung Fu Panda, trying to learn this graceful and healing martial art.

As I stood among my peers watching instructor Susan Hammadock, I flashed back to the horror of fourth grade ballet class, a humiliation fostered on me by parents hoping to trade their tomboy for a ballerina. They should have gotten their money back.

Based on my sketchy memories and some old fading photos, I was always at least one arabesque behind everybody else. And often stuck with one leg up on the ballet barre, unable to do anything but fall down.

“Make a friendship fist,” our instructor says, snapping me back to 2017 and a room without mirrors but with friends of all shapes and abilities.
With soft music playing, our bodies relax as we move through the Tai Chi forms, raising our arms like a crane, slowly moving as if we are holding a ball in our hands, raising both arms to the right to resemble picking up a bale of hay.

The movements are unhurried, deliberate and graceful.

It’s like scenes I saw in Beijing or Shanghai, with hundreds of Chinese citizens in city parks, enjoying communal open-air morning Tai Chi. The practice was developed when Mao Tse Tung was in power as an exercise for all the people of China.

Tai Chi came to the West in the 1960s and ‘70s and now it’s practiced all over the globe by 700 million people “playing” this form. They call it playing because they say that happiness is considered a vital part of health and success.

I can’t argue with that.

So here we were, at CAMP Rehoboth, playing Tai Chi. Also a bit of Qi Gong, which is energy work integrating posture to increase circulation throughout our bodies. I especially loved the move where you gently massage your jaw. Pickleball players may need to massage their legs and arms, but for me, from yapping and chewing, a jaw massage is quite appropriate.

The overall message to Tai Chi and Qi Gong “players” is that everything should be gentle and easy to do, creating relaxation and comfort along with the unblocking of our energy flow.

Which brings me back to ballet class and that leotard-clad nine-year old. I did my best to conform to my dance teacher’s shouted commands and harsh criticism. I kept out of the way of the mean girls, tried to blend in with the walls, not look in the mirror. I hated going there, being there, riding home in the car with my sister who got all the solos and all the attention.

Back home I buried my face in a book, maybe Cherry Ames or Nancy Drew; or I mooned over Julie Andrews on TV in Cinderella; or wrote my own little plays to put on in the backyard. I locked myself in my room, playing Kingston Trio records. But once a week, I was dragged off to that hated and humiliating ballet class.

But at CAMP, I gleefully show up for Tai Chi and Qi Gong, where there is no mandatory recital to prepare, no ill-fitting leotard to wear. And this exercise isn’t designed to burn calories or raise my heartbeat.

It does, however, raise my spirit.

Yes, the movements are unhurried, deliberate, and graceful. I feel that way too. And I wish my parents could see the smile on my face.

I’m off to savor the moment and have a Chai Tea.