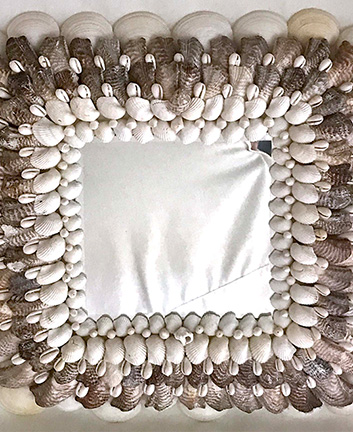 A friend recently came up to Rehoboth from Key West for a week to escape the post-Hurricane Irma chaos on the island. Interestingly, he rode out the storm and then left once the airport re-opened. It’s not the most logical thing I’ve ever heard, but then again David believes in the healing power of crystals, scented candles, and Judy Collins. A true Key West eccentric, he strolls about in linen drawstring pants and crocheted tank tops. And, leather sandals, of course. At age 63 he refuses to embrace either the computer or a smart phone. He writes notes and letters. He also creates the most exquisite seashell mirrors.

I know what you’re thinking. And you’re not totally wrong. David’s work is a bit “crafty,” and his mirrors aren’t everyone’s cup of tea. They do, however, sell in some of the better galleries and home décor stores in Key West. He hand collects all his shells, cleans and polishes them and organizes them by genus. He also gives each mirror a persona, evocative of course, from its particular shells and design. I happen to own two: Butch and Lila.

Go ahead, clutch those pearls. Here’s the deal. But, as a fourth generation Floridian, I’m proud to say I’ve always been enchanted by these jewels of the sea. I had quite the collection when I was a youngster, picked up mostly on walks with my brother along the shell-strewn beach at Alligator Point on the Gulf of Mexico, and then noted dutifully in a book on Florida seashells. But only empty shells. Ones with a living creature inside were tossed out to sea as far as I could fling ‘em.

In addition to his mirrors, which are named, I still have a small collection today, mostly large conchs and whelks, Florida specimens only. I position these grand shells atop wooden chests and strategically in bookshelves, a nod to the days of yore when rich and royal gentleman collected beautiful and exotic shells brought back by Dutch East India Company ships from their trading voyages throughout Asia and the South Pacific.

“Conchylomania” they called it when the passion for seashells broke out in Amsterdam, rivaling even the Dutch madness for collecting tulip bulbs. The trend of collecting and showing off seashells spread through Europe. It was called “shell fever” in the United States, and it peaked in the 1830s and 1840s. At one point, seashells sold for about the same as paintings by the likes of Rembrandt and Vermeer.

I used David’s visit as an excuse to explore the shelling around Rehoboth Beach. Frankly, I’ve never seen many shells on Rehoboth Beach. Perhaps that’s because the City grooms the beach? Online advice from avid seashellers said one of the best places to find shells in our area is during low tide at the point on Cape Henlopen, the place where the land curls westward into Delaware Bay. On the map it looks like a place seashells would congregate. In all my years on the coast, I’d never been up there, so I thought why not?

It’s a lovely, lengthy stroll from the parking lot to the beach on the Atlantic side and then up to the point. David opted not to join me, citing an aching ankle or perhaps he was just fearful of navigating the gauntlet of fishing lines running out to the sea from all the trucks and SUVs lined up on the sand. I walked on alone, which suited me.

I arrived at the point at the height of low tide. The sun was starting to set over the water in the western sky and I marveled that I could get this view on the Delaware shore. I dropped to my hands and knees at surf’s edge, but what awaited me was not a mother lode of seashells, but, rather, many polished stones in differing shades of white, black, and brown, bits and pieces of horseshoe crab, a couple of oyster shells, and a lot of slivers of broken clam, whelk, and scallop shells, sort of like giant toenail clippings.

After about a half hour, I discovered my first decent seashell, a beige and brown Atlantic heart cockle. Nothing fancy, but at least it was whole. Cockles are strong and compact and can be rolled over the sands and banged about without much damage to the mollusk inside. And this might be the clue I’d been searching for. Perhaps the reason we don’t have many specimen shells on the Delaware shore is because the Atlantic Ocean is so rough when compared to the gentler Gulf of Mexico and Caribbean Sea?

I brought my “collection” back to David, whom to my surprise wasn’t the least disappointed. He transferred them to a plastic Ziploc bag of similar items he’d collected and gave me a strange looking smile. I can’t wait to see what will emerge from this mismatched collection of toenail clippings. 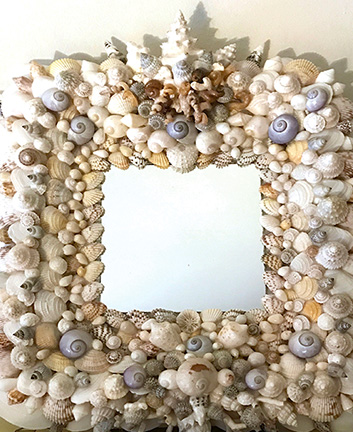