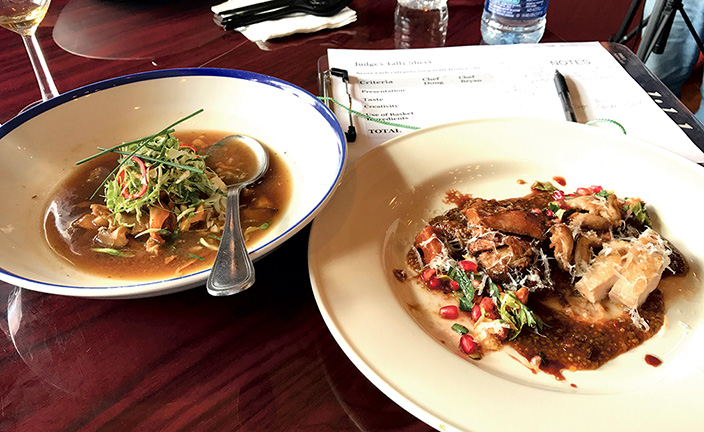 Two gigantic foodie events took place locally in the past few weeks and the report from the field is delicious. If you want to know the best dishes around, and the very best places to get them, listen up.

First, over at the annual Celebrity Beach Brunch to benefit Meals on Wheels, the Rusty Rudder hosted dozens of chefs and venues showing their culinary artistry. Mimosa in hand, I wandered, first to the tables offering brunchy items—Crust and Craft had a spectacular brioche Croqué Madame, with maple sausage, cinnamon bun, and quail egg.

Okay, breakfast over, we hit the lunch bunch—outstanding were the Fork & Flask burger bites with smoked onions, bacon and cheese; the stunning beef bourguignon from La Fable (like a taste of Paris); and the Rudder’s spicy New Orleans Jambalaya (quick, pass me another Mimosa!).

For me, the most exquisite dish was the tuna avocado tower from Chef Peter McMahon at Ivy. There were so many more goodies, from so many local chefs, it’s impossible to mention them all, but many really upped their game this year—cheers to Dogfish, Blackwall Hitch, Pasqualinis, Java Jukebox, Eden, Grandpa (MAC), and so many more.

The following Saturday found me at the beautiful Independence clubhouse in Millsboro for the SoDel Food, Wine, and Music Fest, now in its third year. I was invited to be a judge for the mid-day Chef Throwdown.

With TV cameras pointed at the chopping blocks, steaming cookware, and ingredients, we saw the chefs facing off on big screen TVs for the assembled crowd of over 100 viewers. It was part Chopped, part a day at the races.

Emcee Hari Cameron from a(MUSE) proved to be an exemplary choice—he kept the excitement going, asking questions of judges, chefs, and onlookers. I confessed to being a long-time restaurant writer, but having a kitchen only because it came with the house.

Doug defended his title as last year’s winner as he whipped up an amazing chicken egg drop soup, flavored with pomegranate, and presented in a beautiful way. Bryan used the ingredients to prepare a delectable lightly fried chicken dish, with bacon, a dark, delicious roux and of course, copious pomegranate.

The judging was difficult, as we sampled both dishes (cameras trained on our faces, as we chewed, swallowed, licked our lips, oy!) and graded the entrees, clipboards in our laps, away from prying lenses. We took into consideration presentation, creativity, use of the ingredients, and of course, taste!

By only a measly three tenths of a point, Doug Ruley was declared the winner again this year, but of course, the real winners were the attendees who got to watch the action and take part in the rest of the fest.

There were tastes and sips from the likes of Cultured Pearl, Bluecoast Seafood Grill, Bin 66, Blue Moon, Nassau Valley Vineyards, DiFebo’s, Lefty’s Alley & Eats, Dogfish Head, and so many more. Several bands took to the deck outside, including a band backing area favorite Peggy Raley Sherman, to entertain diners and drinkers.

One thing is certain, every October these two events, the Meals on Wheels Celebrity Chef’s Beach Brunch and the SoDel Food, Wine and Music Fest light up our culinary coast with fodder for foodies everywhere. Join me next year!