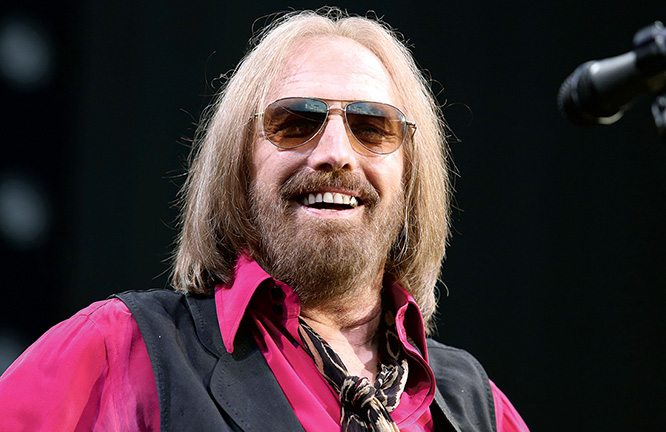 Tom Petty and the Heartbreakers’ Damn the Torpedoes came out in October of 1979, a few weeks after my 11th birthday. The first two singles, “Don’t Do Me Like That” and “Refugee,” were all over the radio, and because I wasn’t allowed to buy the album (my mother thought rock music was evil) I dutifully sat by the radio with my tape recorder until I was able to capture them on a cassette tape. This I brought with me onto the school bus, where it was played on a friend’s boom box in the back seat. This was how we listened to music back then, on homemade mixtapes complete with the voices of DJ’s and whatever sounds were going on in our bedrooms. I remember that particular one also featured current favorites including Fleetwood Mac’s “Tusk,” The Knack’s “My Sharona,” M’s “Pop Muzik,” The Cars’ “Let’s Go,” Foreigner’s “Dirty White Boy,” Cheap Trick’s “Dream Police,” Donna Summer’s “Dim All the Lights,” and Michael Jackson’s “Rock with You.”

Our town didn’t have a record store, and MTV was a year or so off, so I had no idea what Tom Petty looked like. But his voice was unmistakable, as was the sound of his music, which straddled the worlds of classic rock and New Wave. The jangling guitars and thumping piano, combined with Petty’s odd, nasally voice, produced something raw and heartfelt that was much greater than the sum of its individual parts. Of course, I didn’t analyze it like that then. All I knew was that I loved it.

I finally got the album the next summer, when I defied my mother, taped a penny to a Columbia House record club form, and sent it off. Lying on the floor in my room, I listened to it from start to finish, then dropped the needle and did it again. And again. It became the soundtrack to those hot, empty months between sixth and seventh grades. Because I had the record sleeve, I finally saw what Petty looked like, which was pretty much like all the lanky, smirking, lazy-eyed boys I went to school with. He didn’t look like a rock star. He looked like one of us, which endeared him to me even more.

On October 2 of this year, a day after my 49th birthday, I received a text from a friend, a music industry journalist, saying, “I think Tom Petty is dead.”

That night I put my headphones on and listened to Damn the Torpedoes. Instantly, I was transported back 38 years. I closed my eyes and remembered what it was like to hear these songs for the first time, to feel the raw immediacy of them in my bones, to be moved by music in a primal way without worrying about what it all meant.

I have a theory that the songs we love when we’re around 12 years old are the ones that stay with us forever, the ones we find ourselves humming for no apparent reason, the ones we turn up the loudest when they come on the radio and sing along. And I think it’s because for many of us, that’s the last age when things still felt magical and the future was full of possibilities. Before 13 came along and kicked us in the teeth with its pimples and anxiety. That’s how Tom Petty’s songs made me feel then, and even now they stir up echoes of those feelings, even if they’re now dimmed by decades of adulthood.

A few years ago, I uncharacteristically shelled out the cash to get second row center seats to see Petty and the Heartbreakers in concert. Until then, I’d never understood the desire to be right up front, but something told me to do it. By the second song of the set, I got it. Petty was no more than a dozen feet from us, and for two hours we watched him having the time of his life. The one and only song he played from Damn the Torpedoes (“Refugee,” unsurprisingly) didn’t come until almost the very end, but the moment the instantly-recognizable drum intro kicked it off, the entire arena exploded, as if we were collectively remembering what it was like to be kids again.

The deaths of celebrities don’t normally affect me all that profoundly. Even when I appreciate their artistic contributions, I don’t know them personally. Tom Petty’s death, though, sent me into a deep sadness that still hasn’t quite dissipated. It’s like a piece of almost-12-year-old me has died too, a part that lay awake on a crushingly-hot July night wondering what life was going to be like when I finally got out of that little town, when I finally got to be who I was going to be.