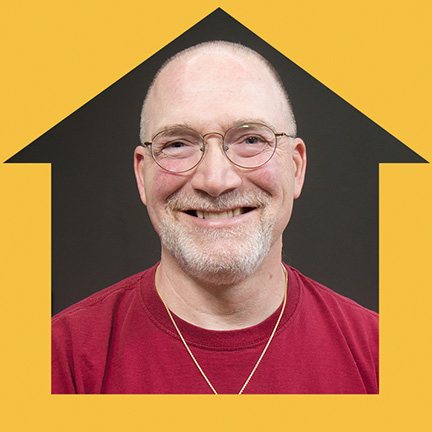 In a life of strange twists and turns, Anthony Chiffolo spent his childhood in the rural community of East Schodack, New York, a town across the Hudson River from Albany. After graduating from the U.S. Naval Academy in Annapolis, Maryland, he served on active duty in naval aviation for seven years and retired from the Naval Reserve.
He began his career in book publishing in 1988 and advanced to Editorial Director at several publishers. He currently works as a freelance editor, proofreader, and indexer from his home in Bethany Beach, Delaware.

Anthony wrote and published his first book in 1997, with many following quickly thereafter—about the mystical lives of the saints, the sacredness of nature, and the spirituality of food. His published works include Padre Pio: In My Owns Words, which won the 2000 Whitney Radio Author of the Year Award, and 100 Names of Mary: Stories and Prayers. He co-authored, with Rayner W. Hesse, Jr., Cooking with the Bible: Recipes for Biblical Meals (which has been published in German, Russian, and Chinese), Cooking with the Movies: Meals on Reels, and We Thank You, God, for These: Blessings and Prayers for Family Pets.

Anthony and his husband Rusty met in 1999 at The Loft, the LGBT Center in White Plains, NY, and were married in 2012 when same-sex marriage became legal in New York State. Soon after, in 2013, they relocated to Bethany Beach.

In addition to being a writer, Anthony is a painter, singer, published nature photographer, an avid gardener, a devoted yogi, and a lover of wolves.

I started volunteering soon after we moved to the area in 2013.

In addition to serving on the Leadership Committee of the CAMP Rehoboth Chorus for the past two years, and singing with the chorus since 2013, I have also volunteered at Sundance, and at some other special concerts and events (such as Well Strung).

Favorite season at the beach and why?

I enjoy all of the seasons. I don’t let the weather keep me in—I get outside every day. As I always say, when someone says that it’s too hot or too cold out, “its only weather.”

Of course, my family had a big influence on me. But, I think the people who most influenced my outlook on life were the wildlife scientists and naturalists who brought the wilderness into my living room via their television programs while I was growing up. People like Jacques Cousteau and Marlin Perkins gave me an appreciation of nature’s beauty, an understanding of the web of life in general, and a passion for conservation that continues to be a focus on my life. I absorbed a sense of interconnectedness, of “oneness” with all creatures, which has come to be an important part of my photography and painting as well as my yoga practice.

One hour wouldn’t be enough. There are so many activities I would like to spend more time at, from yoga to painting to reading to sitting on the beach. I try to cram as much into a day as possible. I suppose relaxing more would be a good thing. Maybe next year….

I’m not terribly enamored of cities. If I had to choose a “city”, it would probably be Annapolis, though I am fond of New York City, and I did love spending a summer in Annecy, France. Overall, though, I would much rather spend time in more wilderness areas.

Whatever is required. I generally prefer to get an early start, but often stay up late too. I suppose getting more sleep would be a good thing.

The LGBT community has made significant progress in the fight for equality in recent years. Did you expect to see this in your lifetime?

I’m glad we have seen this progress. I only hope that the values of acceptance and love we instilled in our daughter, and others in the community have instilled in their children, will continue to move our world toward peace and love.

Given the new political climate, are you concerned about the possible loss of rights for the LGBT community?

Yes, certainly, given the political polarization of the country. I think it continues to be important for LGBT persons to be visible—in their families, in the community, at work, and in the marketplace. To “speak truth to power,” as I believe the Quakers first expressed it; but also to speak and act with love. It’s not easy, nor do I always understand how to do that, but if I believe in “oneness,” if I believe that “we are all one,” as I said above, then I need to act as if what I do or say to the stranger on the street, for example, or on social media, I am doing or saying to myself at the same time. And, I want to treat myself well! I hope that my example helps; I don’t know how else to proceed. (Sorry to preach.)

Next year. As I say every year.

Graduating from the Naval Academy. Becoming a father. Meeting my husband. All have taken me down paths I never could have anticipated.

My health. My husband. Nature. Yoga.