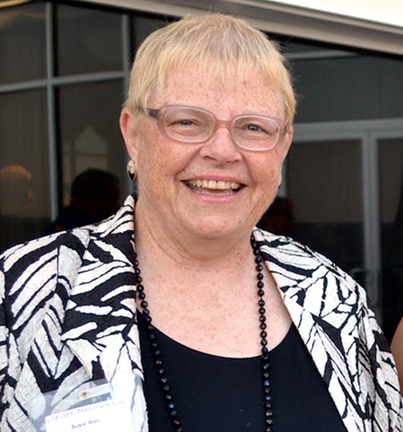 Dr. Susan “Susie” Ball is a super-friendly person with a great sense of humor. But she gets very serious when the topic turns to nature and the environment. How does a psychiatrist from Philadelphia become an environmental activist at the beach? Let’s find out.

A native of England, Susie was an only child growing up in a suburb of London. Mom was a hairdresser. When Susie was five years old, her father suffered severe injuries after being thrown from his moped and spent months at the RAF Hospital’s Burn Center.

“I used to visit him at the hospital. A hospital can be a scary place for a five-year-old,” said Susie. “What a coincidence that I would spend most of my adult life employed in hospitals, and then a burn center.”

Upon graduation from high school, Susie was encouraged by friends in New York to come across the “pond” and join them in the Big Apple. Upon arriving in New York, Susie got a job as a lab technician at NYU. Her boss saw Susie’s potential and encouraged her to enroll in college, and Susie went off to City College. After receiving her bachelor’s degree, she was accepted into medical school at the University of Pennsylvania in Philadelphia.

Susie spent a year in the internal medicine program and discovered that she preferred sitting down and talking at length with patients instead of treating physical ailments, so Susie switched to the psychiatry program. After graduation from “Penn,” Susie did her residency at Thomas Jefferson University Hospital in Philadelphia, which led to her career with Crozer-Chester Medical Center in Delaware County, Pennsylvania.

Susie was a hospital psychiatrist, then a psychiatry consultant to Crozer’s Burn Center, and later became director of Geriatric Psychiatry at Crozer—all while managing her own private practice.

Around 1993, Susie was introduced to her future partner and spouse, Susan Delaney, who was Director of Human Resources at Delaware County Memorial Hospital in Drexel Hill, Pennsylvania. After a year, they had a commitment ceremony, and a few years ago, after Delaware legalized same-sex marriage, they were finally married in Delaware.

Susie and Susan had discovered the joys of Rehoboth after a few weekend visits, and eventually bought a rental property while still living and working in Pennsylvania. They continued weekend visits over the years, joined a small circle of friends and started thinking that the beach would be the ideal place to be when they decided to retire.

Six years ago, the “R” word became reality, and Susie and Susan were finally living at the beach full time. However, retirement was not sitting well with Susie and she realized she needed to “get out and get involved with something.”

An avid nature lover and bird watcher, Susie just happened to hear a young man giving an impassioned talk about the state of Delaware’s Inland Bays. That young man was Chris Bason, Executive Director at the Delaware Center for the Inland Bays, a non-profit organization that has been actively involved in preserving and protecting the Inland Bays since 1994. Susie was motivated enough to join their Citizen Advisory Committee, then became Committee Chair, and later was asked by Mr. Bason to join the Center’s Board of Directors. She now serves as Board Chair.

“Through the Center’s work, I became extremely passionate about saving our beautiful bays and the right of all Delawareans to have clean water,” said Susie. “Delaware’s bays and their wildlife remain at risk from pollutants including nitrogen and phosphorus runoff, and failing wastewater treatment programs.

Sussex County in particular has several communities where clean drinking water is at risk or already compromised. The Center is one of only 28 organizations throughout the entire United States that are part of the National Estuary Program (NEP), created by Congress in 1987 to develop comprehensive management plans to restore and protect the estuaries and inland bays.

Currently, the Center is working to install stormwater retrofit projects in Dewey Beach, Stockley Center and Anchorage Canal. Susie also has volunteered her time to lecture at Osher Lifelong Learning center and has been a guest speaker at several community homeowner associations.

“All my life I have worked to improve the welfare and well-being of people. I have transferred my “caring for people” mantra to caring for our environment. We have to preserve and protect what we have.”

If you are interested in learning more about the inland bays, or would like Susie to be a guest speaker please email her. And thanks, Susie for being a friend of the bays.

When she is not aimlessly wandering about the hardware store, Kim can be reached by email.