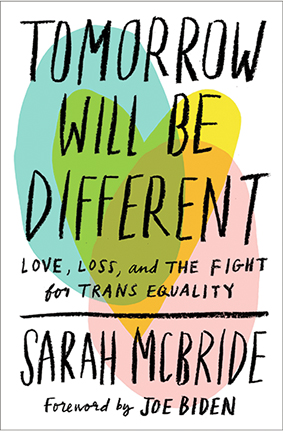 Things are never as bad as they seem.

There’s always a brighter spot if you just look for it, always something to be thankful for, a way of making yourself feel better because things aren’t as bad as they seem. As in the new book Tomorrow Will Be Different by Sarah McBride, there’s always a chance to make a change.

And so, McBride tamped down a feeling of “homesickness” inside herself and tried to be a boy by dating girls, joining a fraternity at college, and doing guy things that felt wrong. It wasn’t until the end of her time as student body president at American University that she took the leap and came out, publicly, as a woman.

It was a relief, she says, and though there was some initial shock, her friends and family never stopped loving her. For that, she acknowledges her fortune; a high percentage of her LGBTQ peers aren’t so lucky.

Not long after this major life-changer, McBride was accepted for a dream come true, landing an internship at the Obama White House. She’d been fascinated by politics since she was small, and was a campaign volunteer in her home state of Delaware. Starting in the White House Office of Public Engagement, she was quickly engaged; activism, as McBride learned, was something she could sink her teeth into, as a trans woman.
Happier than she’d ever been, McBride’s life continued to rise: she fell in love with Andy, whom she’d met at a party, though she didn’t see him again until he emailed her months later. He was trans, too, a homegrown Wisconsin boy with a sense of humor, and she adored him. The future was bright.

And then things changed again….

There’s a message inside Tomorrow Will Be Different—and it’s not the activism one that you think is there.

Oh, there’s no denying that author Sarah McBride is an activist and she’s been a big part in making change, not only at state-level but nationally. She’s a history-maker and a shaker. But this book isn’t just about that.
Oh-so-subtly, McBride makes readers’ brains itch. LGBTQ teens can be fragile, and you’ll watch closer after reading this book. Health care isn’t just an issue for the middle-class, and you’ll understand better now. Politics aren’t just something to rant about, and in the midst of all this, believe it or not, you may be better off than you think you are.

This book forces a different way of looking at things, but you might not initially notice that as you’re crying over the rest of this memoir.

So bring tissues while you read and let your brain itch. Let Tomorrow Will Be Different sink in because things can always be better than they seem.