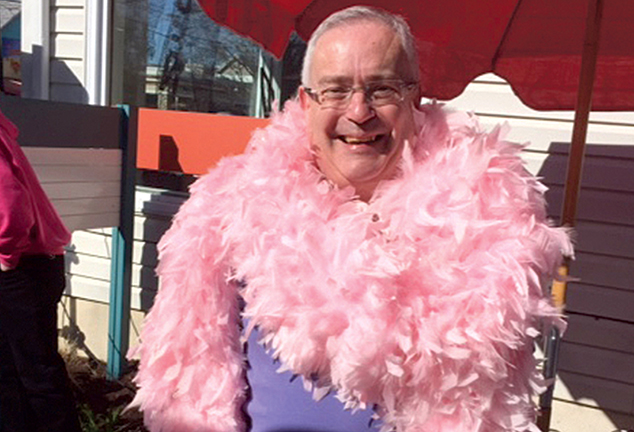 There Wouldn’t Be a Women’s FEST Without Our Hero

I’m writing this column at the last possible second before deadline, having spent the past two weeks working as interim editorial manager with our Letters crew, making sure the magazine doesn’t skip a beat despite the tragic loss of our leader, Steve Elkins.

I struggled with what to write. I certainly could not pen a cheery, humorous essay or go without acknowledging our community’s loss; indeed the whole City of Rehoboth’s loss—even the entire state of Delaware’s loss.

That the City of Rehoboth had its flag at half staff for Steve says everything. Because of Steve and Murray, and CAMP Rehoboth, everyone recognizes that Rehoboth has room for all. It’s an amazing and enduring legacy.
Personally, I can’t even begin to put my feelings into words yet.

But one thing I do know is that Steve was a cheer-leader and facilitator for the original idea of a Women’s Conference, which he and CAMP Rehoboth nurtured as it morphed into a Women’s FEST at CAMP Rehoboth. Next weekend will be the 18th Annual Women’s FEST and it could not have grown into the spectacular event it is today without Steve’s hard work and support. And Murray’s as well, of course.

But from day one, in addition to his Executive Director duties, he wrote about it; loved to emcee shows so he could talk about CAMP Rehoboth; and most famously, volunteered year after year, to work—among other events—the frantically busy and raucously noisy beer line at the annual Ladies 2000 Tea Dance. Oh did he have fun!

By Sunday morning of FEST weekend, Steve would wrap himself in his beloved pink boa and walk in the Broadwalk on the Boardwalk to fight cancer. Oh how we all wish he could be among the survivors marching this year.
Which, after a brief Kleenex moment, brings me back to Women’s FEST 2018.

Months ago, the FEST Committee agreed to dedicate the weekend to the late Marriage Equality activist Edie Windsor. She was responsible, after all, for the first Supreme Court victory paving the way for marriage equality. And we plan to honor her everywhere we can, including questions in Lesbian Trivia (Friday morning, April 13, at the Atlantic Sands), the lesbian author Book Fair (also on Friday morning at the Sands), and the showing of the film (for FEST Pass holders) Edie & Thea: A Very Long Engagement.

But we can certainly give a hearty nod to Steve Elkins, as well. After all, his lobbying efforts, testimony, a quarter century of outreach and his entire life’s work helped make LGBT rights, marriage equality, and Rehoboth’s diverse community a reality.

So even as we grieve, let’s get together (men welcome, too!) to hear musical icon Janis Ian, have a wonderful FEST weekend, or enjoy the many other activities Rehoboth has to offer. Then on Sunday April 15 (men, too!) take part in the annual Broadwalk on the Boardwalk to fight cancer. We’ll be walking for so many. And certainly for Steve. I hope that pink boa makes an appearance. ▼