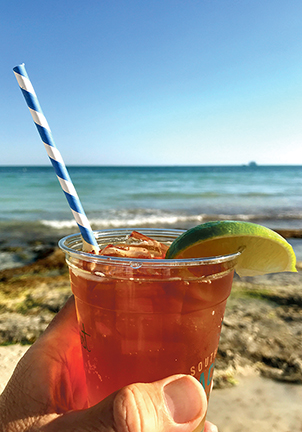 No More Sucking for Me

Imagine this tree hugger’s surprise when the young German girl at the beachside bar handed me a cocktail with a blue and white paper straw. I can’t remember the last time I sucked on one of those, but it had to be back in the early 1970s.

Paper straws are making a comeback here in Key West this winter as bars across the island are joining a growing movement to reduce the use of plastics, one straw at a time. As the bartender explained, plastics are bad for the ocean. Sea turtles accidently ingest them. Of course, I couldn’t help but notice the cup holding 12 ounces of dark rum and ginger beer was made of plastic.

I know plastics are a growing problem in the oceans but I had no idea about the specific impact of the ubiquitous plastic straw. According to the Plastic Pollution Coalition, Americans use about 500 million plastic straws each day, enough to wrap around the Earth 2.5 times. It’s a stunning figure; especially considering one does not need a straw to drink. The only time I use one is with a cocktail and I can honestly say I take one or two sips through it and then lay the annoying thing down anywhere I can.

Researchers at the Ocean Conservancy claim plastic straws are the sixth most common type of litter and among the top ten marine debris items. They’re hardly ever recycled because they’re too small.

Turtles, marine mammals, and fish don’t exactly eat the straws. The main danger comes as the plastic, made mostly from petrochemicals, breaks into smaller pieces over time. They aren’t biodegradable. That’s how bits of plastic enter our food system. In turtles, the plastic often gets caught in their intestines, causing them to have trouble eating.

That said, did you see the video of the turtle with the straw stuck in its nose?  Google it. Over 19 million people have and that poor sea turtle has become the poster child for the issue.

An Australian university study estimates over half the world’s turtles have ingested plastic. Microscopic pieces of plastic even have been found in mussels in remote ocean habitats worldwide, according to a study by the Norwegian Institute for Water Research.

The international movement against plastic straws seems to have started about two years ago and I’m glad to see it picking up momentum one community at a time. Campaigners say the biggest obstacle seems to be not a fear of collapsing paper straws but the cost to produce biodegradable straws. They can cost up to eight cents per straw, compared to the one-cent plastic versions.

I normally don’t use this column to advocate positions, but I’m making an exception because who doesn’t love a sea turtle? And who wants to ingest petrochemicals while slurping an oyster? Seriously, though, now that I know the trashy truth behind straws I shall be more vigilant about what I suck in public. Who wants to join me? #Stopsucking on plastic straws.▼