Dancing in the Name of Love

Love is a universal theme, an emotion that unites us in our humanity.

We toss the word love around with wild abandon—sometimes expressing our deepest and most heartfelt emotion; sometimes the way we feel about a restaurant or a new shirt. It is a word of deep complexity, dependent in meaning on the subtle variation in the way we express it to one another.

Art and music are rich with love references. I googled to see if there were any studies done on the percentage of songs devoted to love themes and found that in general, the number appeared to be around 60%. I don’t swear to the reliability of that figure—though it sounds a reasonable estimate to me.

“In the Name of Love” is the song on my mind this summer. Sharon Redd recorded it in the early 1980s; gay boys rejoiced from coast to coast. It was a full out, hands-in-the-air, dancefloor hit. Sharon, by the way, was one of Bette Midler’s Harlettes in the mid-70s.

In the Name of Love is the theme of this year’s Sundance 2018: Rainbow XXXI on Labor Day Weekend—in memory of my husband, and CAMP Rehoboth and Sundance co-founder, Steve Elkins. I considered briefly the song “Everlasting Love” recorded by Vicki Sue Robinson in 1983 and Sandra in 1987, but quickly settled on “In the Name of Love,” simply because of what the title says about Steve, Sundance, and CAMP Rehoboth. So much of our lives and our work were just that—in the name of love. 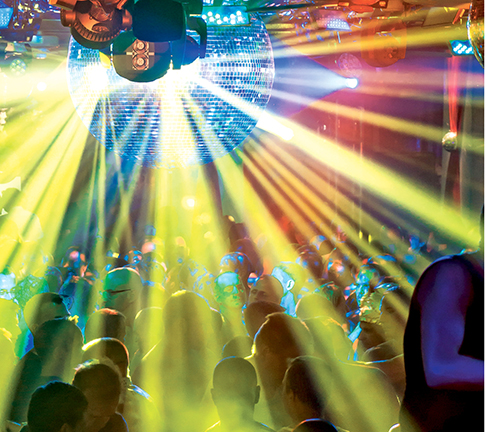 This Labor Day weekend we will open the doors on Sundance for the 31st time. This will be the first time in all those years that I have chaired the event without Steve. I can already tell that preparing for Sundance is even more emotionally draining than I had thought it would be. I expect that will be true for many who have been involved with Sundance for a very long time.

I do believe that getting through this first Sundance without him will be cathartic for me—not because I will grieve any less, but for the simple closure it brings to the past year.

In my mind, the transformation of Steve’s lymphoma into an unstoppable monster began at last year’s Sundance. Though he did a beautiful job, he was in so much pain he barely made it onto the stage to say thank you to our Hosts, Supporters, and Sponsors, and to kick-off the live auction and introduce our Sundance auctioneer, Lorne Crawford. Two days after Sundance he was in the hospital, facing a frightening new diagnosis and the beginning of a six month downward spiral for both of us.

Sundance—especially the night of the dance—has always been a celebration, and celebrations of all kinds can be emotional experiences for any number of reasons. One of the great gifts of being human is our ability to laugh and cry at the same time, and many a tear has run down my face while dancing at Sundance over the years.

To this day I remember vividly a late night on the dance floor of the Saint in New York City. At the time, AIDS was ravaging the gay community there, and as I danced I noticed a man I did not know dancing his heart out near me. Tears were streaming down his face and neck, reflecting the lights. It was a private moment for him and I didn’t intrude. I don’t have to know his story to understand the complexity of emotions he was experiencing. I’ve never doubted the power of music and dance to move us in inexplicable ways.

The first Sundance took place in 1988—also at the height of the AIDS crisis. Our friends were dying and we felt helpless. We started raising money because we didn’t know what else to do. Through it all we kept dancing, even in the midst of the dying—maybe because of the dying. We had to find ways to celebrate the living and the lives of those we had lost along the way.

Of the 21 friends who hosted the first Sundance in 1988, four of them died of AIDS-related deaths before the mid-90s when newly developed drugs began to slow down the death rate. One other survived long enough to gain a few years from the medications.

Nowadays, our generation is older, and dying of more age-related diseases. I started to say natural causes, but I somehow can’t find it in me to believe that cancer is in any way a “natural” death. Whatever it is, those of us still living need to dance, to celebrate, to shake out the pain and the stress of our lives—to let the music shake us out of our routines, our habits, and all those silly ideas that dance is in any way age-related. In our youth we used to laugh that we would still be dancing in our old age—even if we needed wheelchairs and walkers.

This year the Sundance has been extended by an hour and the doors on the dance night will open a 7 p.m. instead of the traditional 8 p.m., and we’re calling the first part of the evening the Sundance Disco Twilight Tea. It will blend right into the Sundance as the night goes on. My advice, come early and stay late. The last hour is always my favorite.

This Labor Day Weekend, please join me on the dancefloor at Sundance. We need communal times to gather together and celebrate life and to love one another simply for being with us right now in this moment in time.