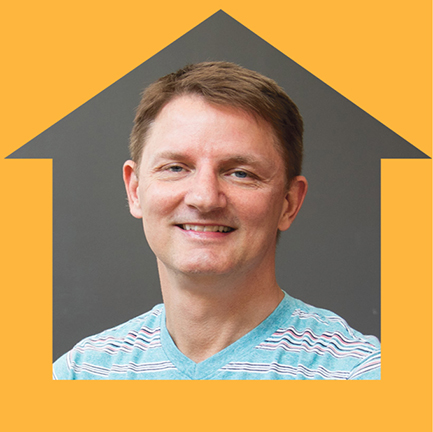 Jordan graduated from the Culinary Institute of America in Hyde Park, New York, in 1987, working in the hospitality industry from 1980 to 1996 in catering sales, as a chef, and as a restaurant manager. While in sales he didn’t know how to word process his own proposals, so he took courses in how to use a PC—leading to a Bachelor’s Degree in Information Systems in 2001. Today, he leads an international team of software developers for a major telecommunications company.

Jordan met his husband, Paul, about 21 years ago. They now split their time between Rehoboth and Baltimore as Paul is the Director of Operations for a Baltimore catering company, and Jordan is a full time telecommuter.

Jordan loves the beach, travel, skiing, snowboarding, and scuba diving. Although he’s been out of the restaurant business for some time, he still loves to cook.

My favorite event is Sundance for a couple of reasons; first, Murray’s decorating wizardry, and second, it feels like the entire Rehoboth community and beyond comes out to support it and have fun.

My mentor would be my seventh grade English teacher, Bruce Lewis. Besides being a great teacher, and a very compassionate person, I was comforted to know an openly gay role model.

I wish I knew that life would get easier, and having a dog will change your life.

Summer! Everyone complains about the crowds and tourists, but I love the energy in town in July and August.

I am awed by the Steve Elkins and Murray Archibald impact. I am so impressed that this tiny beach town has an organization like CAMP Rehoboth. The breadth of programs and community impact rivals the gay community centers in New York and Los Angeles. CAMP Rehoboth’s controversial strategy of creating change by winning over potential local adversaries through their hearts and minds appears to have been quite effective. Rehoboth is a wonderful place to live, and I am so grateful for the changes Steve and Murray have helped come about through their personal efforts, and by inspiring others like me.

The LGBTQ community has made significant progress in the fight for equality. Did you expect to see this in your lifetime?

I was lucky enough to grow up in a progressive community where LGBTQ people were often out of the closet and accepted. Therefore, I have felt since adolescence that it was just a matter of time until the entire secular world accepted LGBTQ people. Marriage equality came much sooner than I expected. I have come to appreciate its importance, but it was not even on my radar as a priority.

Given the current political climate, are you concerned about the possible loss of rights for the LGBTQ community?

Populism in general concerns me since I think what the majority of people want is often not fair or morally right. I am not quite at the point where I believe people’s attitudes about the LGBTQ community are rapidly deteriorating, but I also acknowledge that I live in a bubble and I would be the last person to know.

What advice would you give the younger LGBTQ community?

None. When I was younger I was not interested in getting advice, and I am pretty sure that has not changed.

2014 was a great year. It was the year I married Paul Weppner. I had not thought I would ever have a wedding, and it was such an awesome experience to celebrate with our families and friends integrated into the same event.

Halloween because people get so excited about the costumes.

Forever. I grew up in Washington, DC and my family came to Rehoboth regularly—even before I was born.

Name the biggest change(s) you have seen.

The most positive change is how well integrated the community is whereas historically, there was discord between the LGBTQ and non-LGBTQ community.

Meeting my husband Paul 21 years ago. Paul has supported me and motivated me to become a better person. He has helped to keep me laughing and entertained all along the way.

Getting a dog. Paul talked me into getting a Boston Terrier about nine years ago, and our dog, Special Ed, brings us so much love and joy.

Going back to school in my 20s. I went from being computer illiterate to being an IT professional. I love technology, and I am capable of happily wasting hours geeking out.

Favorite US city and why?

San Diego. The climate is ideal. The size and scale of the city suit me, and of course, it is located on the coast so it has wonderful beaches.

Friends and community—my friendships and my sense of belonging to this community are what make me happy, and I am so grateful for both.
Also, HIV medications—without them, I would have many fewer friends, and our community as we know it might not exist.

Jordan, we appreciate that you volunteered for so many events last year. CAMP Rehoboth needs the help of more volunteers like you in order to grow and reach out to the community. We hope you will continue to volunteer for many years to come. ▼