I’m not done yet.

At some indeterminate point between the release of Issue number 11 and this one, I came to the conclusion that I had more to say about Sundance, and Steve, and dancing. This is Part II of Dancing in the Name of Love.

Kevin Kline provided many hilarious moments in the movie In and Out. One of the best was his attempt to get through a cassette recording titled “Guide to Being a Manly Man.” “The ultimate test” was, according to the voice on the tape, “at all cost, avoid rhythm, grace, and pleasure. Whatever you do, DO NOT DANCE.” The music was “I Will Survive.” The disco beat took over. He failed the test—gloriously—and danced around the room with a wild, hands-in-air exuberance that every gay man in the world would recognize instantly.

To this day I can’t watch that scene without leaping out of my chair and dancing right along with him.

My first memory of dancing goes back to the early 1960s. I’m vague on details like grade or year but I was young—seven or eight maybe. We were in a school gymnasium and I was fascinated—the Monkey, the Twist, the Pony! What skill I might have been missing I made up for in enthusiasm—which in my mind now must surely have been read as “gay-as-a-goose!”

As I got a bit older, I would spend a couple of weeks each summer at a Methodist church camp in the mountains of North Alabama. To heck with the hiking, fishing, and canoes—I lived for the folk and line dancing we did every night after dinner. No one could kick higher!

Then there was disco.

In 1977 Georgio Moroder and Donna Summer released “I Feel Love.” It was a radical breakthrough. “I Feel Love” was and remains an astonishing achievement: a futuristic record that still sounds fantastic. Pop critic Jon Savage wrote in The Guardian in 2012, “Within its modulations and pulses, it achieves the perfect state of grace that is the ambition of every dance record: it obliterates the tyranny of the clock—the everyday world of work, responsibility, money—and creates its own time, a moment of pleasure, ecstasy, and motion that seems infinitely expandable, if not eternal.”

“I Feel Love” remains on my “favorites” list to this day. 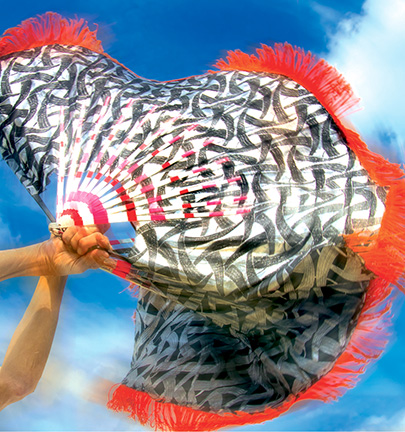 Sometime in the early 1980s I was mesmerized by fan dancers in the clubs of New York. I didn’t really have a mentor, but slowly began to teach myself the art. My first fans were lethal weapons disguised in sequin chiffon—gorgeous but deadly. I had used too much weight in them, and though I developed a certain skill with them at the time, there were occasions when I almost knocked myself out cold on the dance floor. One of the photos included in the movie that Carolyn Watson made for Steve’s funeral showed a group of us at a birthday party at our apartment in Manhattan. In it, Steve has the remains of a black eye from those fans. We were out on Fire Island the week before, he picked up the fans, made half a spin, and hit himself in the eye.

I haven’t used that pair of fans in years, but I still love to watch the fan dancers and flaggers when I have the chance—and on rare occasions—usually late at night at Sundance—I find the time to create a little fan magic myself.

I still love to dance—but even more, I love to dance with a pair of fans—or flags. The air and fabric swirl around my head, and for a time that’s all there is—the music, the lights, the motion, the color. For a brief moment in time, I have wings—I can fly.

There have been countless discussions in recent decades about the evolving nature of gay culture and an ongoing debate over questions of assimilation or separation. CAMP Rehoboth has always been about finding common ground and building bridges throughout our community, and I continue to believe that is what we all—gay and straight—need to do to create strong and safe environments for everyone. That doesn’t mean that we have to give up our heritage or stop exploring what it means to be LGBTQ.

When I’m fan dancing, I feel like I’m celebrating and preserving a little piece of gay culture. More importantly to me, the dance connects me to my creative center. I feel like I’m fanning the flames of my heart and soul. Collectively, the room feels alive with music, with people, with joys, and hopes, and creative potential.

No matter how tired I am from a week of Sundance setup, I still find the time to dance—and I hope that will always be true.

The first night of Sundance is the auction. The second is the dance, and it kicks off this year with legendary DJ Robbie Leslie opening the doors onto the world of disco. Later on the amazing Joe Gauthreaux takes over the room, and I’m confident that we will hear some of Joe’s equally amazing remixes—including his new mix of Diana Ross’s “Ain’t No Mountain High Enough,” and the new mixes of “Don’t Leave Me This Way.”

If I were allowed to play Disco Lottery (see Letters, Volume 28, Number 11), which I’m not because of my connections to the DJs, I would pick “This is Me” from the motion picture The Greatest Showman.

This is me…this is Sundance—and Sundance is all of us, together, celebrating life, and love, and joy, and the very precious little time we have to spend  together with the people we love.

Sundance is in memory of my husband and co-founder of CAMP Rehoboth and Sundance, Steve Elkins. He loved Sundance, and he worked hard for years to make it a success. He wouldn’t want us to be sad—but to celebrate the chance to come together as a community and have a good time.

He would encourage all of us—dancers and not—to fan the flames of love: to be kind to one another, to love one another, to laugh, and hug, and remember that even where there is grief and pain, there is joy also.

By the way, I can always find extra Sundance tickets for fan dancers in search of a dance floor.