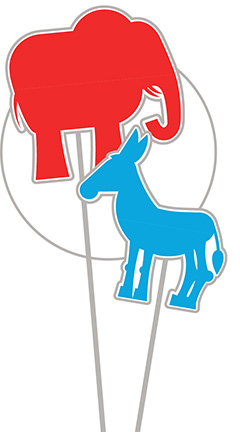 My father is a Trump supporter, and I love him anyway.

Wait. Before you stop reading, you should know that when it comes to politics, I disagree with him on pretty much everything: gun control, healthcare, climate change, you name it.

For some reason, he has it in his mind that I’m a communist, even though I’m not. He calls me Pinko. “Pinko, they mentioned your friend Liz Warren on Fox News tonight.”

To make things more complicated, he is a Christian (the non-church going kind), and I am a Buddhist (the non-temple going kind). We have the non-going in common.

In a way, he has become my greatest teacher.

He and his partner adopted me as a teenager and helped me get into college. He told me to always keep an open mind. “If you want to know about religion, go to all kinds of services.” In the same month, he took me to MCC of Greater Dallas, an LGBTQ-friendly church, and to evangelist Jimmy Swaggart’s Family Worship Center in Baton Rouge. “Why did you bring me here?” I complained, “this man is preaching about hell.”

“Try to keep an open mind. Find out why people believe what they do before you react.”

One of my great challenges in life has been reacting to all the crazy sh%# he says without going off the deep end.

He tells me, “If you’re going to take that position, then you’d better do your homework and know what you’re talking about because right now you clearly don’t.”

One day I found a book on his nightstand: A Critical Introduction to Queer Theory by Nikki Sullivan.

“Why are you reading this?”

From my point of view, his life seems contradictory. As far as I know, he has zero conservative friends. Quite the opposite: one of his best friends is a black, lesbian Marxist. He has been openly gay for decades. He lived in San Francisco, New York, and DC through the 60s, 70s, and 80s. He was friends with Harvey Milk, Sylvester, and Marsha P. Johnson. I’ve realized that he enjoys being around people who completely disagree with him; otherwise, he gets bored.

So that’s what we do. We disagree. Most of the time. And it works, even though it shouldn’t.

I honestly have no idea how he became a Trump supporter, but he has helped me realize that having an LGBTQ identity does not necessarily imply having a certain political identity. I have learned to respect this diversity, and this respect has not compromised my own political beliefs.

If anything, our differences have brought us closer together. Our discussion of politics has become a battle of wits seasoned with statistics, headlines, and history. He has challenged me and taught me to stand my ground.

A decade ago, he was diagnosed with Parkinson’s disease. Fighting the loss of his mobility, he entered a PhD program at Georgetown University. For a while,

I drove him to class and pushed his wheelchair over brick sidewalks while he yelled at me for going too fast. I drove to DC to visit him in the hospital after he dropped his classes. I drove to the nursing home after he fell in the shower, and visited as he completed physical therapy.

These days he’s back home and doing well.

Next time I visit him, I’m sure we’ll find something to argue about. We’ve realized our relationship is more valuable than our political beliefs. In an age of toxic, political divisions, respect is golden. Disagreement, paradoxical as it may seem, has become our signature form of love. ▼

James Adams Smith works as an English tutor at Delaware Technical & Community College and is studying to become an occupational therapist.