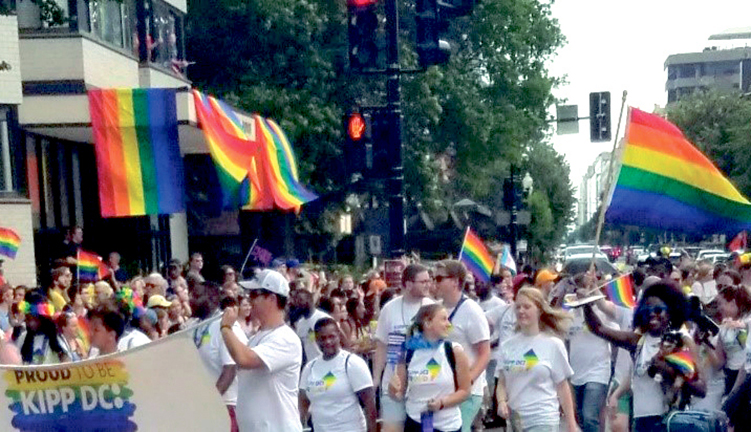 Ain’t Too Proud to Parade!

I had a happy Pride Month! Interestingly enough, as a cis white girl, I'm really feeling it this year. I suppose it's not too hard to understand why.

And being all these things, if only as an ally, I am also really, really scared and sad. I guess what would encompass all that would be, "I am an American." And I'm not as proud of that as I used to be.

This year, I went to the Capital Pride Parade in Washington, D.C. It was wonderful. And for a while...a short several hours...I was able to feel that pride in being in this country that I love so much.

I've been to the St. Patrick's Day parade. (Fun with green and beer!)

I've been to the Cherry Blossom Parade. (So many blossoms, so little understanding of how to make them grow.)

I've been to numerous Labor Day and Independence Day parades. (Or should they be called the Marches of the Political Candidates?)

Parades, in general, are fun. Especially when they are about purely American stuff—like freedom, celebrating the working man, and the idea that my vote matters. But this year, at the Pride Parade, it felt different. It felt more. At this parade, I felt joy.

Now, I don't bandy that word about very much. It gets shouted and sung from the rooftops all throughout December and frankly, I rarely feel a bit of it. It seems trite, hackneyed, and tired. So, understand, I use that word in its truest definition.

I stood there with my rainbow EVERYTHING, and waved my rainbow flag and bantered with other goers. I watched as float after float, and group after group, marched by singing and dancing, throwing swag, or high-fiving the sidelines.

My feet hurt, my arms were tired, the sun was hot, I was getting elbowed, and...it all didn't matter. I didn't want to leave, because in the midst of all the people, parade, discomfort, crowd, and noise, everyone was happy. There was this beautiful—probably rainbow-colored—bubble that seemed to encase us all. It was surreal. But it was joyful. That was the word.

And as I looked around at a crazy diverse crowd of people—all there to enjoy the moment and each other and to celebrate everyone's right to parade—I felt like we were all Spartacus. We were all Pride. We were all Joyful.

Wish it could last all year. ▼

Stacey Fearheiley is a frequent Rehoboth visitor, an actress who has appeared onstage many times in Rehoboth, and half of the duo producing the Poperation podcast.