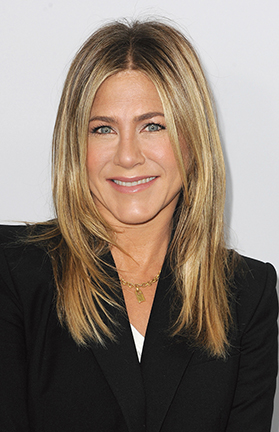 Jennifer Aniston and Tig Notaro Will Be First Ladies

“Jennifer Aniston is very attractive…and I was just like, hey, how about…we’re married,” says lesbian comic Tig Notaro (One Mississippi). And now they are. Or will be on film, anyway. The premise—one that Aniston agreed to based on nothing more than a pitch—is part of an in-progress script called First Ladies, and it involves Aniston as the first woman president and Notaro as her wife.

It came about when Notaro and her real-life wife and screenwriting partner Stephanie Allynne joked with each other about running for office. Then it became an idea for a movie, and then Jennifer Aniston said yes, and then Will Ferrell jumped on board, too. This is not the normal way projects come to life in Hollywood, but Notaro is on a roll and if she’s given the chance to do it her way, very funny material happens. This one could take a couple years to see movie screens, but it’s a reason to keep on living.▼

Amandla Stenberg Talks ‘Salty’ Reshoots for The Hate U Give

A film about systemic racism fires a cast member for racism. You can’t make up this stuff, and it happened recently to the film adaptation of Angie Thomas’s National Book Award-finalist YA novel, The Hate U Give. The story of a young girl (Amandla Stenberg) who witnesses a close friend’s murder by police, and who then gravitates toward the Black Lives Matter movement, the film from George Tillman Jr. (Soul Food) was in the can when it came to light that supporting actor Kian Lawley, a YouTube star, had posted videos with racist language. He was fired and replaced with Riverdale’s Archie, K.J. Apa.

Stenberg—who identifies as pansexual, non-binary, and prefers the pronoun “they,”—was, in their own words, “salty” (for readers who don’t keep up with young people’s slang, it means angry or agitated, you’re welcome) during reshoots, but says it improved their performance. Slated for later this year, the drama also stars Anthony Mackie, Regina Hall, Common, Issa Rae and Grimm star Russell Hornsby. ▼

Supergirl, the underrated, progressively-minded CW series that keeps on rolling in spite of a network change (from CBS) and a ratings slump, will see the arrival of a transgender character in its upcoming fourth season.

Kara Danvers, the reporter identity of Supergirl (Melissa Benoist), will welcome a person named Nia Nal to the newsroom. All current information suggests that this character will take a leading role in Danvers’ workplace and that the character will also be a trans woman.

As trans characters slowly make their way into narratives on network TV, it’s beginning to feel like a mini revolution, and each new addition is great news. Of course, casting becomes a flashpoint issue for trans characters, and we’re hoping that actual trans actors are the only people being considered. Why not let the cis male actors who want to stretch go find a different way to accomplish their goals? It’s simply time. ▼

We are somewhat worried. Not too much, not yet, but a little. See, we watched the trailer for Bohemian Rhapsody, the Freddie Mercury biopic coming this fall, and like a lot of queer people, we’re a little anxious that Mercury’s gayness and his death from AIDS will take a backseat to the glory of Queen’s music.

We will, of course, take a seat on this until we actually see the film. But still, now we can’t help being a little nervous by association for Rocketman, the Elton John biopic that finally arrives in theaters in May 2019.

Taron Egerton plays John in the 1970s when his career blew up with albums like Honky Chateau and Goodbye Yellow Brick Road, well before John announced his bisexuality, married a woman, then divorced her, and came out as gay in the early 1990s.

Directed by Dexter Fletcher, who stepped in to finish Rhapsody after the firing of Bryan Singer, Rocketman is still pretty firmly under wraps and we’d like to take this opportunity to encourage both movies to add a lot more homosexuality to the final mix. Unhappy LGBTQ audiences would be a bad response for biopics about LGBTQ heroes, we can all agree.▼

Writer Romeo San Vicente adds a lot of homosexuality to everything he touches.