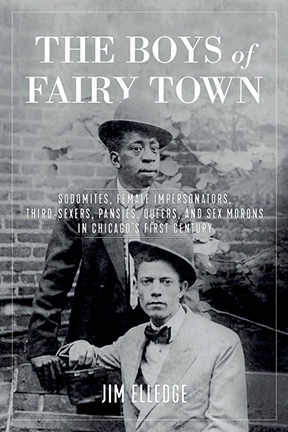 When you were in school, that’s all history was to you: a list of years and names to memorize and then forget, twenty minutes after Finals Week. So maybe now it’s time to find a history book that’s relevant to you—a book like The Boys of Fairy Town by Jim Elledge.

Because Chicago was considered to be a “largely male frontier city” when it was established in 1837, the Windy City has always been home to a strong population of gay men, cross-dressers, and male sex workers. Here, Elledge tells the stories of some of the ones who might otherwise have been forgotten.

Take, for instance, John Wing who, says Elledge, “was a sodomite.”

That’s the word many post-Civil War Chicagoans would have used for Wing, although most people then only had a vague idea of what a sodomite was. They knew it was something bad, though, even as Wing did something good: he was a faithful diarist, and left his volumes for historical posterity.

Female impersonators were tolerated in Chicago in the latter 1800s, but sometimes only barely. Those who were most accepted were men who put their feminine sides to work as entertainers; for others, the desire for women’s clothing was meant for strictly private times.

For families, such things were often an embarrassment: Elledge cites a story of “Mrs. Noonan,” who was married and worked at a nearby military fort. Despite her final wishes, the “women at the fort” went to prepare her body upon her death, and discovered that Mrs. Noonan was a man. Her third husband swore that he hadn’t known but he was ashamed, and killed himself.

Gay men posed nude for other gay men in perfectly respectful and artful ways that went mainstream. Newspapers reported on same-sex love—sometimes kindly, sometimes scandalously. Gay lectures were open to the public; entire neighborhoods became hubs of openly gay life; and living as another gender was easy until, alas, the tide started to turn in the 1940s and being gay could suddenly get a man arrested.

At first blush, it may seem like The Boys of Fairy Town is just another historical tome. Dates, times, old dead guys—but look deeper and you’ll see why you should want to read it: it’s bursting with stories that are irresistible.

In his introduction, Elledge explains how he chose the tales he shares in this book, and why recording these stories for public consumption is absolutely essential. In addition to being lively and ever-relevant, the tales show an interesting historical arc of acceptance and persecution, displaying a youthful America that’s just dipping her toes into the pool of difference and duality. Readers are lent a feeling of pride but may also be particularly affected when Elledge shows the tide turning.

The Boys of Fairy Town contains nudity, but also the kind of delight you get when you come across a pile of old newspapers in Grandma’s attic: it’s quaint, informative, and entertaining. It’s totally worth your time. ▼