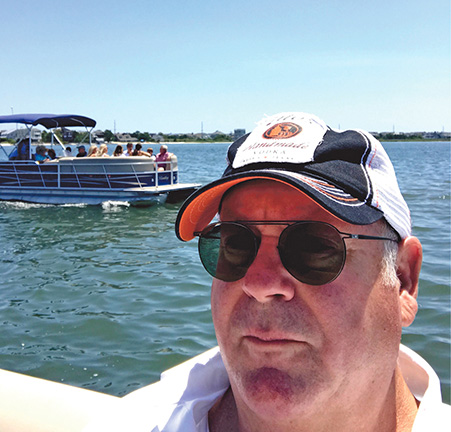 As a Southerner, I’ve done a lot of things I don’t talk about in polite company. I’ve eaten barbecued pork rinds at the Winston Cup NASCAR race in North Carolina and slurped down cherry jello shots inside an RV at the Texas State Fair. I’ve “Shot the Hooch” in Georgia and gone wild boar hunting in Florida. I’ve pissed beneath the Peachoid in upstate South Carolina and screwed in the back of a U-Haul truck in southwest Virginia.

I’ve even purchased illegal moonshine in West Virginia. But I never, ever thought I’d set foot on a pontoon boat. A man must draw the line somewhere. Partying on a floating trailer in a lake or a river always seemed to me a step too far.

Then I received an invitation from a very prominent gentleman, whose name I will not reveal, to attend a memorial service on a fleet of pontoon boats in Rehoboth Bay. We were going to spread the ashes of a recently departed friend and her dog.

I was flabbergasted. What does one wear to such an event on a pontoon boat? I don’t own a tank top. Was I expected to bring my own koozie? Would there be proper cocktails or just cans of beer in a humongous Igloo cooler? Despite my reservations, I accepted the invitation, ignoring my line in the sand faster than Barack Obama did his in Syria. I was intrigued. How could I say no?

In case you’re wondering, a pontoon boat is a flattish boat that relies on pontoons (cylinder tubes) to float. These sorts of boats have been in use for centuries, but the modern pontoon motorboat is said to have been invented by a farmer in Minnesota in the 1950s. The idea took off and pontoon boat companies sprang up throughout the Great Lakes region.

This history surprised me because I’ve always thought of pontoon boats as a Southern thing. You know, big-breasted women in tube tops and Daisy Duke shorts singing along to white trash Shania Twain songs while big-bellied bubbas in baggy cargo shorts guzzle cheap beer and argue whether the East has overtaken the West as the best football division in the Southeastern Conference. Rebel flags and chicken bones are a-flying. Nobody’s using sunscreen and everyone is fat, pink, drunk, and Republican. At least that’s how I’ve always envisioned “pontooning.”

My hopes were dashed, however, when I arrived at the marina in Dewey Beach and walked into a swank and subdued dockside cocktail party. The men were all wearing colorful polo-style shirts and shorts. The women were decked out in sundresses and Lilly Pulitzer pants and sporting lots of pearls and straw hats. The bar featured cocktails and rosé wine and the lunch buffet consisted of spiced shrimp, chicken salad sandwiches, small quiches, deviled eggs, and fruit. Of course, I’d known deep down this would be the case and yours truly fit right in with an all-white clothing ensemble. I did, however, opt for a black and white mesh Tito’s Vodka baseball cap to add a flair of redneck sensibility.

After about ninety minutes and three stiff cocktails, the pontoon boats arrived. And wouldn’t you know it, not one of them had Astroturf, rusty lawn chairs, or big American flags. Instead of coolers of beer there were buckets of cut zinnias. The seats were clean and well upholstered. A nice awning provided shade for those who wanted it.

We refilled our drinks and climbed aboard for the short ride out into Rehoboth Bay where the four boats linked up. Ashes were scattered and psychedelic colored zinnias were tossed into the water. It was quite moving and for a moment I thought maybe I’d gotten this pontoon boat thing all wrong.

Then I smelled it: the distinct aroma of cannabis. Pearls be damned. A few of the deceased’s oldest friends were saying goodbye in their own special way out here in the open, partying in slow motion. My faith in the myth of the pontoon boat was restored! ▼