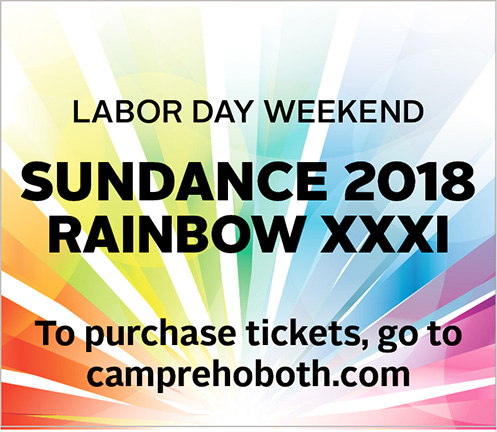 It’s more than just the party of the year. Sundance, the two-day Labor Day weekend extravaganza held annually by CAMP Rehoboth, has become the event of the year, and more than 1,500 people participate in one or both evening festivities. This year, Sundance 2018—Rainbow XXXI: In the Name of Love will be held September 1-2 at the Rehoboth Beach Convention Center.

The live and silent auction night has become a must-attend opportunity, as has the New York club atmosphere of the dance.

The first Sundance was held on CAMP Rehoboth founders Steve Elkins and Murray Archibald’s 10th anniversary. The couple had vacationed in Rehoboth for years, but by 1988, they had seen many friends die from AIDS. Wanting to do something, they created Sundance, conceived as a dance party that would raise funds for AIDS-related charities.

Initially, it was a modest event, but it brought the community together in a positive way and raised money for the cause. “At that time, there was no treatment for AIDS at all,” explained Archibald. “There was almost no hope at that point. People were dying left and right. The whole community here was devastated, losing so many friends.”

The event was named “Sundance” because it was originally designed to be a pool party. But it rained that day, so partiers moved inside, to The Strand nightclub on Rehoboth Avenue. That event raised about $6,000. The next year, organizers added an auction, which brought in an additional $3,500.

Since then, Sundance has grown with sponsorship from local businesses and individuals, moved from The Strand to the Rehoboth Beach Convention Center, and raised more than $2 million overall.

Since its beginning nearly thirty years ago, CAMP (which stands for “Create A More Positive”) Rehoboth has been the catalyst for bringing together diverse parts of the community and providing valuable information and services for all. In the past year alone, the CAMP Rehoboth Community Center on Baltimore Avenue hosted cultural exhibits, supplied social service and tourist information, donated community room space to 33 different nonprofits, and served 13,000 people.

CAMP Rehoboth provides health and wellness programs, which range from flu shots and physical fitness to mental health counseling and support groups. More than 2,000 people were reached by its cultural programs and 7,500 were provided outreach, education, and advocacy programs in 2017 alone.

Nearly 500 volunteers support CAMP Rehoboth’s activities, which include programs at skilled nursing and assisted living facilities, clean-ups at Cape Henlopen State Park, Women’s FEST, and an array of community service functions. An estimated 5,000 people read each issue of Letters from CAMP Rehoboth, which is published 15 times a year and is packed with information on local services, events, and activities.

CAMP Rehoboth’s commitment to AIDS prevention has continued to this day, with the opening of new HIV testing centers in Seaford, Laurel, Rehoboth Beach, and Georgetown, allowing a larger number of people to be tested than ever, totaling 800 in 2017. The group’s Safe Sex Outreach Program reached 5,582 individuals and distributed 82,601 Safe Sex kits in 2017. Sundance revenues support all this and more.

For many, the annual CAMP Rehoboth Sundance is the highlight of the summer season, and Sundance 2018 will likely set new records.
Over the years, the auction has been legendary for its wide array of dazzling and unique items. One year, a banner from a Sotheby’s auction of Jacqueline Kennedy Onassis’ estate was up for bid. Another memorable item was a poster from the movie Brokeback Mountain, signed by the cast.

But for many, Sundance is more than just an event; it’s a place to embrace old friends, meet new people, and celebrate community. And a way to support CAMP Rehoboth’s community services and outreach.

The recent loss of beloved Sundance (and CAMP Rehoboth) co-founder Steve Elkins has given the 2018 Sundance special significance. For more than 25 years, Steve’s leadership and vision allowed CAMP Rehoboth to become one of the most respected and successful nonprofit organizations in Delaware and contributed greatly to establishing Rehoboth as a widely recognized community with “room for all.” Organizers hope to make this a Sundance that Rehoboth will never forget.

Sundance was born from the creative partnership of Steve and his husband, Murray Archibald, and has become the flagship event for CAMP Rehoboth. “The first Sundance was a tenth anniversary party for us and we wanted to celebrate by doing something to help our community,” Murray says. “This would have been our 40th. ‘In the Name of Love’ we will still celebrate that anniversary—and dance one for Steve.” ▼