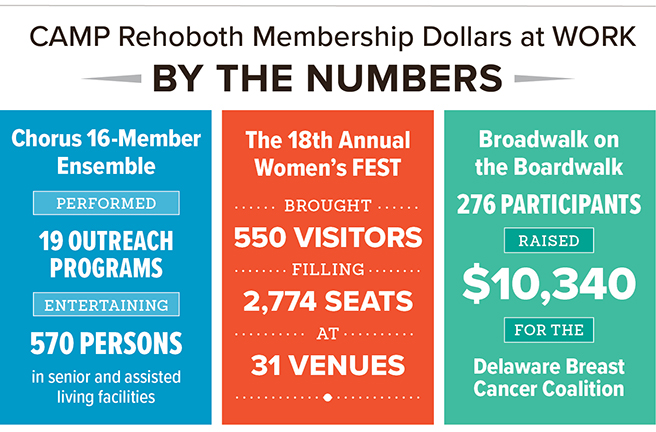 What’s in a name? When Shakespeare asked that question in his play Romeo and Juliet, the answer was “That which we call a rose by any other name would smell as sweet.” Now I am not one to recklessly take on the greatest writer in the English language (obviously, because when I did so just now, I split an infinitive!); however, I have to disagree with Shakespeare on this point. Language can be powerful, and how we talk about things often changes how we think about things. That certainly is true about CAMP Rehoboth. With a name like “CAMP Rehoboth,” it should not come as a surprise that at least a couple of times every summer, someone calls the office and asks about the campground amenities offered there. “Are there hook-ups for electricity available?” the callers ask.

To their credit, the office staff resists the temptation to talk about hook-ups at all, but rather explains that “CAMP” is an acronym. It stands for “Create A More Positive…” in this case, Rehoboth Beach. That has been CAMP Rehoboth’s mission from its start three decades ago, and that vision remains the essence of CAMP Rehoboth.

I must admit I raised my eyebrows back when I noticed “CAMP Rehoboth Community Center” popping up in my Facebook feed and email inbox. My first thought was that a community center is a building, not a person or an organization. It is something that “is,” not something that “does.” Upon further reflection, however, I realized that the name CAMP Rehoboth Community Center really does have something to say to us today. I like that it puts “community” right smack dab in the middle of things. In fact, you could say that “Community” really is CAMP Rehoboth’s middle name.

I am also liking the use of the word “Center.” We all know that “center” is often used to refer to a building that serves as a meeting place for a particular group or activity. However, in geometry, the center refers to the middle point. It is the point within a circle or sphere that is equally distant from all points of the circumference or surface. In CAMP Rehoboth’s case, I would change the word “distant” to the word “close.” CAMP Rehoboth works to be close to all segments of our community, regardless of race or gender or sexual orientation. CAMP Rehoboth gets close to the community as it reaches out, educates, and acts as an advocate.

Actually, I worked on a CROP project before it was even called CROP. In 2010, it was called “Volunteer on Vacation” (VOV). Claire Ippoliti, one of the VOV organizers, asked me if I would help put together a program for the children at the West Rehoboth New Beginnings Center. It was to be a two-hour music class for elementary and middle school-aged kids.

Now let me tell you, two hours can be a long time when one is trying to teach young children! Fortunately, we had an entire team to help us that day. I recruited my good friend Georgiana Ibach, who brought along her electronic keyboard. Claire also recruited Gregg Glaviano to teach part of the class, and Gregg brought along his partner Dan Melesurgo. We also had a couple of VOV volunteers to help provide one-on-one attention to the kids.

I started the class by standing in front of the kids and holding a poster that read “Singing is the art of speaking beautifully on the sustained breath.” Like a Maria Von Trappe wannabe, I started teaching the kids the basics of singing using a simple do-re-mi scale. We all appreciated Georgiana plunking out the notes to keep us in key (and to give all of us confidence!). Gregg took over after that and introduced the concept of rhythm. He had the kids clapping out the different rhythms of various musical styles.

During the last portion of the class the kids became lyrists and learned some simple rhyming schemes. The kids put all of this together as they worked in small groups to re-write the words to “My Country ‘Tis of Thee” to share something about one of their favorite things. Yes, Maria Von Trappe would have been proud of us. We did all of this in two hours, and the kids had fun at the same time.

Now in its tenth year, CROP has done all sorts of community outreach projects, from working in soup kitchens to doing home improvements, from helping at the Rehoboth AIDS Walk to planting gardens. Their full, rich history will be shared in an upcoming issue of Letters.

I also had the privilege of performing with the CAMP Rehoboth Chorus on several occasions, although technically not as a member of the chorus. In the early years of the Chorus, Artistic Director Fay Jacobs wanted to incorporate an ensemble to add some variety to the concert performances. She asked John Hulse, Steve Elkins and me to resurrect “The Men in Pink Tutus” of CAMP Rehoboth Follies fame. The good news was that we no longer had to perform in tutus.

One year we were asked to perform the Andrew Sisters’ classic “Boogie Woogie Bugle Boy” in wigs and military uniforms with skirts and sensible black shoes. I remember one time we were working to tighten up the three-part harmonies of the song, but we were struggling to memorize the harmonies AND the choreography. Fay allayed all of our fears when she said, “Remember, you are a sight gag! It doesn’t matter what you sound like.” (Gee, thanks, Fay!)

The year that marriage equality became law, John Hulse and I were joined by Richard Stonebreaker as blushing brides “going to the Chapel of Love,” complete with pipe cleaner tiaras and wedding bouquets from the Dollar Store.

As the group grew, members of the Chorus took on the challenge of costumes and choreography. Fortunately for today’s audiences, they meet the challenge and do so while singing in key! The Chorus is eighty members strong, and they typically sell-out 400 seat venues for their annual concerts.

Besides bringing memorable musical moments to the community, the Chorus raises money for the “Music and Memory Project,” which provides personalized music playlists, delivered on iPods and other digital devices, for people who suffer from a wide range of cognitive and physical challenges. These musical favorites tap deep memories not lost to dementia and can bring participants back to life, enabling them to feel like themselves again, to converse, socialize, and stay present.

Outreach. Education. Advocacy. It is all about relationships, building community, and joining together with others. Members of CAMP Rehoboth sustain and support the programs we provide within the Community Center and in the community. The commitment of our members not only provides modest perks for each member, but it broadens our base of community and involvement. Membership provides important data for grants and foundations and in legislative advocacy. Be a part of that by joining CAMP Rehoboth as a member or by renewing your membership this month. ▼

Glen C. Pruitt, a CAMP Rehoboth Board member, does quality assurance work for non-profit organizations and government agencies. Just to be clear, his middle name is NOT community: it is Charles.