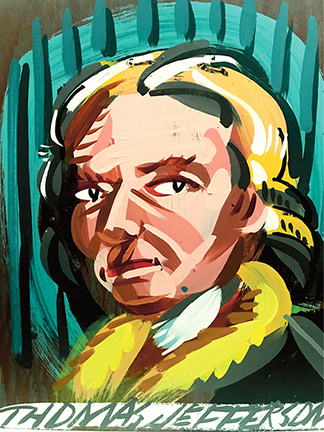 5 THINGS I LEARNED AT MY COLLEGE REUNION

The marketing was slick. There were seductive photos of attractive, well-dressed men and women sipping cocktails at dusk beneath swaying strands of white lights and orange and blue paper lanterns strung across the verdant green lawn rolling south from Thomas Jefferson’s historic and freshly-renovated Rotunda. Emails wooed with the promise of seminars, picnics, band parties, dinners, and dancing.

So when a couple of friends began making noise about convening the old gang for our 35th reunion, I put my natural reservations about group activities aside, plunked down my money, and signed on.

It’s a shame none of the above happened. At least not the way they showed it in the reunion brochure. It rained the entire reunion weekend, which meant there were no lovely parties or picnics on Mr. Jefferson’s Lawn. Instead, social events were combined and held indoors. We were handed mixed drinks in plastic cups on the floor of the new basketball arena, which in theory could have been cool, but in reality was a nagging reminder of our #1 ranked team’s historic upset loss in the recent NCAA basketball tournament. #toosoon.

Nevertheless, it was an enjoyable weekend, and I even managed to learn a few things.

First and foremost: Never begin a conversation by asking anyone what he or she does. It’s boring. And, seriously, who really wants to talk about work when you’re away from work? After the third such conversation at the Class of ‘83 Dinner, I decided I needed a new strategy to cope with these stuffed shirt types or I’d never get through the evening.

Have you seen the movie Romy and Michelle’s High School Reunion? If you did, you’re going to appreciate what I’m about to share. Each time thereafter, when someone opened a conversation by asking what I had accomplished since graduation, I replied nonchalantly that I’d invented Post-it™ notes—not the original yellow ones, of course, but the fluorescent colored ones. Now, instead of toiling away in some thankless 9-to-5 job, I was tending to my garden of English and American boxwoods.

To my great delight, five people bought the crazy story, including an engineer from Texas who supports Trump and who droned on and on about having spent seventeen years developing the technology behind Voice over Internet Protocol (VOIP). Were my classmates that naïve or did they truly believe we were all remarkable?

The second thing I learned: The song “Shout”—originally sung by the Isley Brothers but made famous by the fictional band Otis Day and the Nights in the movie Animal House—will still bring rhythmically challenged white people to the dance floor to jump and raise their hands in the air and then crouch lower and lower as the black lead singer in the yellow suit implores them to “get a little bit softer.”

I swear I could hear knees cracking all around me. A few brave souls managed to get onto their backs and into a full gator position. Of course, we needed a helping hand to rise back up off the floor….

Learning number three was simple: No adult over the age of 50 should brandish a glow stick. I don’t know who in the Alumni Society approved this, but it’s neither of the era nor dignified. Moreover, it was embarrassing. What do you do with it people asked me? I fashioned crowns and necklaces for about a dozen people.

The fourth thing I learned: Even worthy heroes have their faults. Did you know that Thomas Jefferson suffered from gas, constipation, and boils on the arse? This supposedly explained why he liked to recline in a Campeachy chair while reading or writing.

I’m told you could hear gasps from the Jefferson traditionalists who had come out to this particular history seminar expecting to hear little known stories about Jefferson and the founding of the University and not tabloid-style gossip.

Moreover, it appears that his architect friend Benjamin Latrobe might have aided Jefferson in the design of the Rotunda. Now that kind of talk borders on blasphemy, and I’m surprised no alumni walked out of the lecture following that bombshell revelation.

The final thing I learned—or was reminded of—is: Coming out never ends. Of course it was inevitable when talking to old friends I hadn’t seen in thirty-five years that the conversation would turn to marriage and children. It would have been easy to dodge the issue and move on. But that’s not my style.

And you know what? Once I outed myself, the conversations became more real, more playful, and more interesting as people opened up. I must admit I was pleasantly surprised because closet doors were tightly closed when I was a student in the early 1980s and the University of Virginia wasn’t known as a bastion of progressive ideas. Things have certainly come a long way.

In the end, this reunion didn’t live up to its billing. I’m not sure it could have, even if the weather had been cooperative. Nevertheless, I had fun, drank too much, laughed too much, and re-connected with some old friends. And I picked up a few new Cavalier t-shirts. I’m not sure I need to do it again. But ask me again in five years.▼