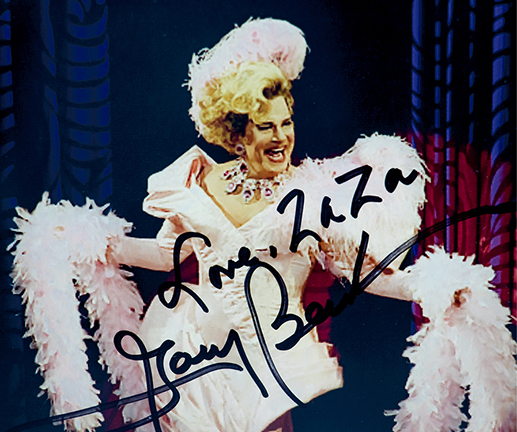 La Cage aux Folles opened on Broadway in 1983 to great acclaim,  was nominated for nine Tony Awards, won six. From the start, the song “I Am What I Am” was a hit with the LGBTQ community. Its status as a bona fide gay anthem was forever enshrined in gay history when Gloria Gaynor released her iconic disco version in 1984.

In the early 1980s, Steve and I were a part of a group house on Christian Street in downtown Rehoboth. The friendships, the dancing, the beach—we came to have fun. “I Am What I Am” never failed to get us up on our feet—around the dining room table, in the backyard, on the dancefloor of the Renegade. We loved it and would shout out the chorus together.

In the winter of 1984 our entire beach house crew flew off to Brazil for a week on the beaches of Rio. One of my strongest memories from that trip was going to a huge nightclub—I don’t remember the name but it was jammed and the dancefloor was packed. The DJ played “I Am What I Am”—the English version we all knew—the energy in the club soared even higher, everyone in the room waved arms in the air, shouting out the words: I am what I am! It was magic.

“Life’s not worth a damn till you can shout out I am what I am.”

The words had power for us—they still do. For a generation finding its way out of the closet, they were words of freedom, words of assurance, words of pride. They shouted out to the world around us what we already knew in our hearts—that we were exactly the people we were meant to be. They echoed our belief that “gay is good” and stood in stark contrast to the disapproval and condemnation we so often experienced from society.

I have at various times in my life been uncomfortable with the word “pride,” primarily when it veers over into arrogance; this was gay pride in its purest form, a joyous celebration for anyone wounded by the deadening weight of the status quo.

LGBTQ pride is about healing—healing for us as individuals and healing for the world around us. The world doesn’t know that yet, so it mistakenly fears us and condemns us. For each of us—gay and straight, and every beautiful variation along the identity spectrum—we are in a period of discovery as we learn to appreciate the gifts we have to offer to our families, our communities, our culture, and our world.

Really, it’s not gay pride at all. It’s human pride. It’s an awakening to the understanding that while cultural roles may vary from person to person, each one is important and deserves to be treated with equality and respect. It is shortsighted of the LGBTQ family to believe that our acceptance into the larger community around us doesn’t change the way that our straight brothers and sisters see themselves.

In late May my extended family gathered in NYC to celebrate my brother’s Pulitzer Prize. Our days together were joyous, made all the more precious because Steve’s death has been such a painful loss to us. We value every moment we have to spend together. But there is more: love to be sure, a higher than average gay to straight ratio, a deep respect for our diverse roles in the world around us, a belief in truth and justice.

I have no doubt that I am who I am—that I was born to be gay. I also have no doubt that I am more than that. I see my parents in the eyes and actions of my brothers and sister, and know that who we are is their gift to us. We were taught to be loving, to be kind, to care about others, to respect others, to be open to new experiences, and to find creative solutions to the puzzles we encounter throughout our lives.

My coming out in 1970 changed my family. We had to learn together what that meant for us and for our relationship as a family to the world around us. I was changed by it.

Steve and I started attending Epworth United Methodist Church as an openly gay couple in 1994. Our presence changed the church. We had to learn together as a church what that meant to us and to our relationship with the community around us. We were changed by it.

We change the world by our active presence and participation in it. Inevitably, our own lives are reshaped in the process.

Choice has been a bit of dirty word to the LGBTQ community. Our opponents use it to claim that we are gay by choice. I know that is not true for me—though it is certainly reasonable to think that someone at a different point on the sexuality spectrum than I might have to make a choice about who they date or eventually marry.

Though most of us do not have a choice about our sexuality or gender identity, a multitude of other choices will continue to shape who we are over the course of our lives.

The same is true for CAMP Rehoboth as we assemble a team to work on our new strategic plan. The choices we make now will shape who we become in the next decade.

I think we need to hear a little Gloria Gaynor at Sundance this year—just so we can jump up and down, wave our arms in the air, and sing out loud, “Life’s not worth a damn till you can shout out I am what I am.”

Even if that’s not all that I am!

Murray Archibald is an artist, CAMP Rehoboth Co-Founder, and longtime President of the CAMP Rehoboth Board of Directors. He is currently serving as CAMP Rehoboth Interim Executive Director and Editor in Chief of Letters from CAMP Rehoboth. Email Murray. Photo: Gary Beach in La Cage aux Follles