From Heartbreak to Hope: Rescuing the Rescue 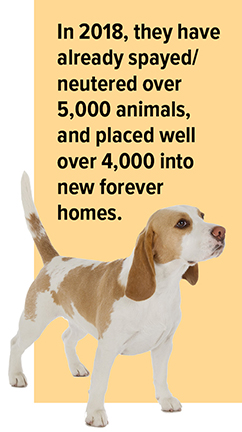 An amazing, uplifting, healing opportunity arrived recently. The Brandywine Valley SPCA sent out a press release announcing they have received a $200,000 matching grant from Longwood Foundation Inc. in support of the BVSPCA’s plans to open a new Rescue and Rehab Center. And, (spoiler alert: here’s where it gets pretty special) the BVSPCA intends to put this money toward purchasing the abandoned Georgetown facility formerly operated by the rescue non-profit Safe Haven.

Yes. That 11,500 square foot facility, built on the donations of time, money and hope of so many of us in this area will be rescued. It can house more than 2000 animals a year and is being sold at auction on June 9, 2018. BVSPA is hoping to be the auction winner.

Safe Haven began its journey almost 16 years ago, looking to deliver better life opportunities for Sussex County’s homeless, neglected animals. It took nearly a decade, but the doors opened for the animals in June 2012. That day was the culmination of much more than the many years of fundraising, planning and permitting; it was the culmination of a dream we had as a community, investing our love, and believing this was needed, not so much as a service, but as a right, for all our animals.

And with that first arrival, the cheering came from all sides. The dream had been realized.

But heartbreakingly, some dreams don’t last. In October 2013, a scant sixteen months later, this dream abruptly imploded. By January 2014, Safe Haven had filed for bankruptcy and in May 2015, U.S. Bankruptcy Court Judge Mary Walrath approved a motion by Safe Haven’s attorneys to abandon the property, as though the overgrown weeds and decaying dog kennels didn’t speak for themselves.

But legal ends don’t necessarily make for emotional ends. The community that had worked so hard, and filled so many clear acrylic donation boxes, wouldn’t find closure in this ignominious ending.

Unless, as Johann Wolfgang von Goethe once said, “Our passions are the true phoenixes; when the old one is burnt out, a new one rises from its ashes.”

Or from its weeds, as may be the case.

Founded in 1929, the Brandywine Valley SPCA became the first open admission no-kill shelter in Delaware and now, in Pennsylvania. Their mission is to put the “human” back in humane animal treatment and advocate on animals’ behalf. Their vision is to be the recognized leader in animal welfare, empowering communities to treat animal life with respect and dignity.

However, this hoped-for new rescue and rehab center isn’t planned as an adoption center, and won't be open to the public. Its unique mission will be taking care of the “4 percent.”

You see, in 2017, the BVSPCA cared for more than 13,000 stray, owner-surrendered, wayward owned, and abused and neglected animals while achieving a 96 percent (!) live release rate. In 2018, they have already spayed/neutered over 5,000 animals, and placed well over 4,000 into new forever homes.

But what about that 4 percent which could not be rehabbed? Buying the Safe Haven facility will allow the BVSPCA to embark on rehabbing the ones who need more. “More” in the form of fostering activities and additional services for our region’s most vulnerable dogs and cats: the cruelty survivors, disaster victims, newborns and infants, animals at risk in other shelters, and those requiring time and training to increase their adoptability.
Obviously we cannot change history. But if Goethe is right, and our passions are our phoenixes, they can rise again.

And the BVSPCA needs your help to do this. “We need the community’s support to be successful at the auction and for subsequent repairs at the facility,” said Adam Lamb, BVSPCA CEO. “This generous support from the Longwood Foundation will help accelerate our momentum towards making our vision for this lifesaving facility a reality for animals otherwise on the fringe of adoption.”

And along with money, they will also need volunteers. Because every time someone comes in and takes a dog for a walk, sits with a cat, or maybe even just reads them a story out loud, that animal’s life will get better.

As for the Safe Haven experience—let’s not forget that even though Safe Haven left many unanswered questions and huge swaths of hurt, it also left some people with hearts filled by adopted wagging tails.

Frank Gallagher, formerly of Rehoboth Beach and now living in Florida, rescued his dog Blue from the old Safe Haven. And there were others, too. Not as many as we’d hoped, but now we may have the chance to see many more happy endings.

To volunteer please go to bvspca.org/volunteer. With programs ranging from photography volunteers to baking volunteers to shelter volunteers, there’s opportunity—and need—for everyone.

Donations and pledges in support of the BVSPCA Rescue and Rehab Center can be made at bvspca.org/rescue-rehab or by mail to: Brandywine Valley SPCA, 22918 Dupont Boulevard, Georgetown, DE 19947. ▼

EDITOR'S NOTE: Good news! Brandywine Valley SPCA successfully bid on the old Safe Haven property on June 9. It will now become a rehab center for vulnerable animals. Letters will keep you posted on the progress.

Stefani Deoul is a television producer and author of the award-winning YA mystery On a LARP from Bywater Books. Contact Stefani.