Anchors Aweigh on that Harbor Queen

The publication date for this essay falls on the thirtieth anniversary of my fortieth birthday. The numerals shall remain unspoken.

Now I’m not given to teeth gnashing over birthdays, but I am certainly well aware of them. So aware, in fact, that it gave me pause a few weeks ago when I met more of my peers in one day at Beebe Hospital than on one night at Women’s Happy Hour.

There I was, getting into a lobby elevator to visit my spouse (possible food poisoning), when I ran into a pal coming out of a CT Scan (potential arthritis complication), another heading to orthopedics (body part replacement), and a friend going to visit somebody else in the ER (pickleball injury).

Is this the new abnormal? Are we going to start having the hospital cafeteria listed for gay women’s meet-ups?

Well, at least I still can. And fortunately, most of the medical emergencies I encountered were neither life threatening nor on the slippery slope of medical deterioration. I had to laugh when I got back into my car and the first thing I heard on the radio was Donna Summer’s “I Will Survive.”
At first I was afraid,
I was petrified….

Okay, so how am I going to cheer rather than fear my entry into this new decade?

First, I am celebrating my birthday exactly as I did my 40th in 1988. Well, not exactly. Back then, Bonnie and I rented The Harbor Queen, a faux paddle-wheel tour boat out of Annapolis, hired a DJ and a caterer, and invited about a hundred of our family members, friends, and work colleagues for a night of dining, dancing, and drinking on Chesapeake Bay. 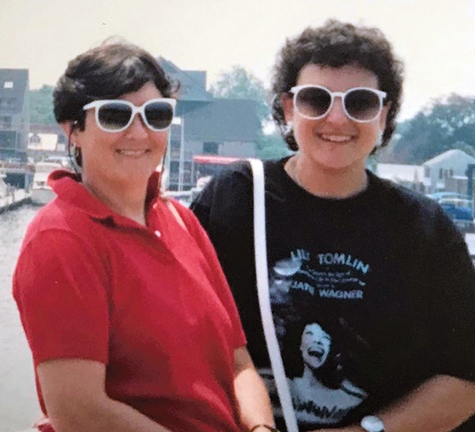 It was rather expensive, not to mention gutsy (or do I mean foolish?) at the time, integrating our gay and straight lives, hoping everyone would get along since nobody could get off the boat for three hours. We just hoped no one would be terribly shocked at two men or two women dancing together to Donna Summer. We made the DJ swear there would be no music for slow dancing.

Happily, it worked out great: Bonnie’s mom danced with my mom, my best friend from high school met and liked all of my gay and lesbian pals, my boss made a new friend in Bonnie’s soft ball coach, and the whole thing was a grand, noisy night to remember. Etched in our psyches are visions of the whole mix of passengers dancing to the re-mix of Gloria Gaynor’s disco take on “I Am What I Am.”

Well, as you read this, tomorrow night is the encore. Sort of.

This time, there are the obvious negatives—our older family members are sadly gone, as are a few peers. As retirees, we no longer have the largesse to rent the whole boat, invite a cast of thousands, and cater the heck out of it. And many invitees, while still in touch, are scattered from Florida to L.A. to Mexico.

But there are oh so many positives! We are gathering in Annapolis with a hearty band of survivors from that first cruise, and taking the silly one-hour public tour on that very same rust bucket Harbor Queen along with a mob of unsuspecting tourists. Then we are gathering at a local watering hole for dining and drinking. Yes, we have nearby hotel rooms to keep our buzzed selves off the roads home. Besides, nobody likes to drive at night anymore.

The gang will include a few survivors who now live in Rehoboth, several from Annapolis, folks coming up from Florida, and over from Virginia. We achieved the 20-plus numbers to qualify for a group rate on the tour tickets, and our group is officially named “The 30th Anniversary of Fay’s 40th.”

And following this nostalgic night out, I have so many cool things to look forward to—a book conference in Las Vegas this coming week; a gig with my show, Aging Gracelessly, at the LGBTQ Center of Greater Reading, PA; then an August trip with Team Rehoboth to the Gay Games in Paris. No, I’m not participating as an athlete. Because all I have ever wanted to do was walk into the stadium for the Opening Ceremonies carrying the Team Rehoboth banner, our Team Captain named me as a coach—as long as I promise not to give any advice to the athletes.

So clearly, there’s no time for angst about birthdays!

And the best news of all is that on Sunday night, September 2, the late-night Sundance contemporary club music dance party will be joined by an early-evening Disco Twilight Tea featuring classic dance music with legendary Studio 54 DJ, Robbie Leslie. From 7 to 9-ish on that night, we’ll be dancing to The Village People, Gloria Gaynor, and Donna Summer.

Did you think I’d crumble?
That I’d lay down and die?
Oh no not I…