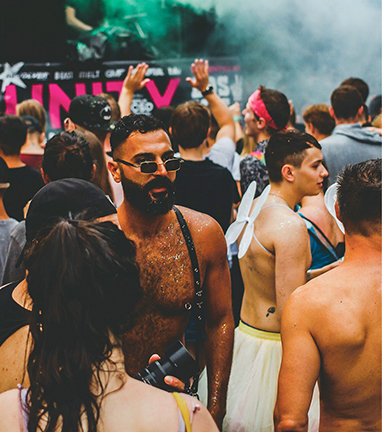 I’ve been thinking a lot recently about my first Pride. It was, I think, in 1990, although I have never been the best with dates and might be off by a year. I know I had recently moved into my first apartment, a studio on Carmine Street in New York’s Greenwich Village. I know that I went with my lesbian friend Mary. I remember I had purchased new shorts to wear, red plaid ones from the Gap. And I remember that it felt wonderful to be young and out (finally) in one of the gayest cities in the world.

That was a strange time. Marriage equality was not yet on the horizon. AIDS was still the focal point of most of our lives, and Pride reflected that. Back then, the Saturday of Pride weekend was about speeches; Sunday was for the parade. That year, the people who spoke talked about wanting to live. They talked about demanding better treatment options, more education, and ending the stigma attached to being HIV-positive. I remember going home sunburned from spending all day outside, falling asleep exhausted, but still waking up at dawn ready to do it all over again at the parade and the dance afterward.

I took lots of photos that weekend. My favorite was of Mary dancing on one of the floats in the parade. It hung on the wall of my apartment for as long as I lived there. That photo has been lost, as have all the others, in one of the many moves I’ve made since that time. Mary, too, disappeared somewhere over the years and we lost track of one another. But I remember her and that day very clearly. And I remember that we were happy and excited about what was to come for us.

I attended a few more New York Prides, but I have not been to another Pride event in about 25 years.

I’m not sure why I stopped going. Maybe the crowds were too big. Maybe the thought of being out in the sun all day was unappealing. Maybe it stopped being political and became too commercial. Whatever the reason, despite living in some of the gayest cities in the country (Boston, Los Angeles, San Francisco, Houston) I have never experienced Pride in any of them.

Now that I live in one of the smallest states in the country, and in a place that is barely a town let alone a city, it might be time to give Pride another chance. For one thing, it would be nice to spend a day away from the farm, among other queer folks. More than that, though, Pride feels political again. I think part of my apathy about the whole thing had to do with not feeling like I needed it. The party aspect of Pride was admittedly fun, but what stirred me more was feeling like it was a time for rallying the troops, for reminding one another that we were—or could be—an unstoppable force for positive change in the world.

I need to feel that again. We’ve all seen what’s happening politically in our country. Day after day, we’re being dragged further backwards into a time when we as queer people were targeted, discriminated against, dismissed as unequal. It’s time to be reminded what it feels like when we gather together and say enough is enough.

I’ve marched in ACT UP and Queer Nation protests. I remember how good it felt to feel like we were doing something instead of wishing that things would change. I remember how empowering it felt to be surrounded by a sea of queer bodies, our voices raised in anger and defiance and hope. Just as I remember those red plaid shorts I wore to my first Pride, I remember buying a Silence=Death t-shirt. Tonight, I bought another one, from the ACT UP NY website (actupny.com). I don’t know if I’ll be wearing it to the local Tractor Supply, but maybe I’ll wear it to Delaware Pride in August.

I know that putting on a t-shirt won’t take me back 30 years. And the issues we faced then are not the ones we face now. We are a different community now, a more diverse one that sometimes struggles to find common ground. Sometimes, I admit, I don’t even know if it’s a community that I belong to anymore, or one where my voice is needed or wanted. A lot has changed since my first Pride, both in myself and in the queer world.

Still, I think it’s time to get back out there, to see the faces of my people, and hear their voices. Almost-50 me might recognize almost-22 me in them somewhere. It would be nice to get reacquainted with him. ▼