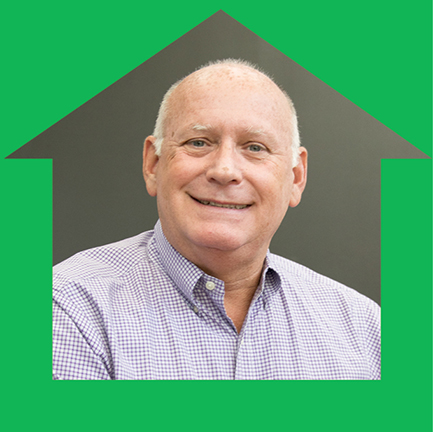 During Bud’s career, he was a classroom teacher, a guidance counselor, and a school principal, retiring in June 2010. He worked in both Maryland and Delaware, and for four educational agencies.

While he has many accomplishments of which he is very proud, he is most proud of his two adult sons. A divorced father of two, Bud describes his sons as successful, productive, and caring adults. The older, Grant, 35 and his wife Lesleh live in Houston, TX. Ross, 31, lives with his girlfriend, Laura, in Charles Town, WV.

In the ’90s, when Bud was on the Board of Directors of the Gay Fathers Coalition of Baltimore, both of his sons attended many of the activities with him, meeting other children with gay fathers. Bud feels these early experiences with the LGBTQ community helped shape them into the accepting and kind adults they are today.

Bud and his husband, Robert, have been together 10 years. They met in Baltimore, and prior to moving to Rehoboth Beach, lived in Charles Village, a vibrant city neighborhood adjacent to Johns Hopkins University. They were married on April 3, 2015 in the sculptural garden at the Baltimore Museum of Art surrounded by a small group of family and close friends.

Travel is something Bud and Robert have in common. So far, Bud has visited 47 states in the continental US and hopes to visit Hawaii and Alaska in the near future. Since Robert grew up in Europe, and has family still living there, Bud and Robert visit several times a year.

Together, they have travelled all over the world. In the last few years, they checked off two “bucket list” trips. The first, in 2015, was a cross-country road trip from Rehoboth to Seattle. After a five-month stay in Seattle, they did a two-week return trip stopping at Glacier National Park, Mount Rushmore, Yellowstone National Park, the Grand Tetons, and Jackson Hole.

Then, in October 2016, they purchased one-way tickets to Auckland, New Zealand. Upon arrival, they rented a truck with two good friends, and toured the country for two weeks. Then, for the next 12 weeks, without an itinerary, they traveled across Southeast Asia, deciding week-to-week where to jump next.

They visited Bali, Kuala Lumpur, Singapore, and Thailand. It was an “amazing, once in a lifetime trip,” and they feel truly blessed.
One of Bud’s favorite quotes is from Margaret Meade: “Never doubt that a small group of thoughtful committed citizens can change the world; indeed, it’s the only thing that ever has.”

For Bud, CAMP Rehoboth is a prime example of these words. “Steve and Murray, along with a small group of others, changed our beach town for the better. Better for straight, gay, married, single, young, elder—all people have benefitted over the last 25 years because of the inclusive, positive community these thoughtful, committed citizens created in Rehoboth,” Bud says. “Thanks to them, we are very lucky to call Rehoboth Beach home.”

In early 2015, when we settled into our new home, I attended a Volunteer Training session and started volunteering right away. I’ve met so many great people by volunteering for CAMP Rehoboth—at mailing parties, the Pool Party, the Sundance Silent Auction team, and while serving as the front desk concierge at the office on Wednesday mornings.

My mother was an inspiration to me. When my parents divorced in the early ’60s, we were the only divorced family at our elementary school in St. Petersburg, Florida. My mother was a single woman working and raising a family, well before this became an American norm. She was far ahead of her time. She was a strong, independent, and courageous woman, teaching kindergarten in the early ’60s and earning a Master’s Degree in Social Work. Then, in 1968, after accepting a supervisor’s position with the DC government, she moved our family to Washington. She was firmly opposed to the Vietnam War and we attended many protest marches and demonstrations together. She also was an active volunteer for local and national political campaigns. I credit her activism for instilling in me the desire for community involvement and volunteering for causes I support. I’m proud to say, I am my mother’s child.

I enjoy the quiet, small town feel of Rehoboth in the off-season, but I love the sun and fun of summers, beach days at Gordons Pond, and evenings with friends. There are always fun activities in the summer from house parties, dinner parties, pool parties, and BBQs. The summer months in Rehoboth are my favorite, but I sure do love Sunday nights year-round at the Purple Parrot drag shows.

This year, 2018, is the best so far. My husband and I are both in good health and we have a wide circle of good friends in both Baltimore and in Rehoboth. My husband is a cancer survivor, diagnosed four years ago this month. After two years of treatment, he is celebrating two years cancer free. It’s a horrible, devastating disease, and it was a horrible point in our lives, but I chose to focus on the positive elements it brought to my life. Living with death looming over your shoulder, I learned an important life lesson—rejoice in the beauty of today. It all sounds so glib, but it’s truly my life’s motto. Cancer changed how we live our lives for the better. We live for today and don’t postpone the joy. We have dear friends and close family that we love. We are truly very lucky and blessed to have been given so much.

Since my first visit in the early ’90s, Rehoboth has grown from a summer town into a thriving year-round town. However, without party places like The Renegade, The Strand, and Cloud 9, it seems to be lacking the vibrant gay nightlife it once had. Also, in the early ’90s, most of Route 1 was a sleepier section of town, offering few reasons to leave the city limits. And now, of course, Route 1 offers many great stores and restaurants. Rehoboth has grown into an easy, comfortable, and accepting place to live.

How long have you been coming to Rehoboth Beach?

I first came here in the early ’90s with my wife and sons. I was a school principal in Dover, and we’d take family trips. After my divorce, I started visiting with friends, which led to a house share on Silver Lake with a group of gay men. Those summers were always great, silly fun. My housemates introduced me to CAMP Rehoboth events, the Love Dance and Sundance, and many themed house parties. Back in those days, there was the Beach Book and competition was fierce among house shares to host the most over-the-top themed parties. Such great fun times. It was a special time in Rehoboth.

Thank you, Bud, for your support of CAMP Rehoboth, and for being a bright light in the office as a CAMPcierge on Wednesdays. Even though you spend winters in Florida, we are very happy you continue to be a part of the CAMP family. ▼