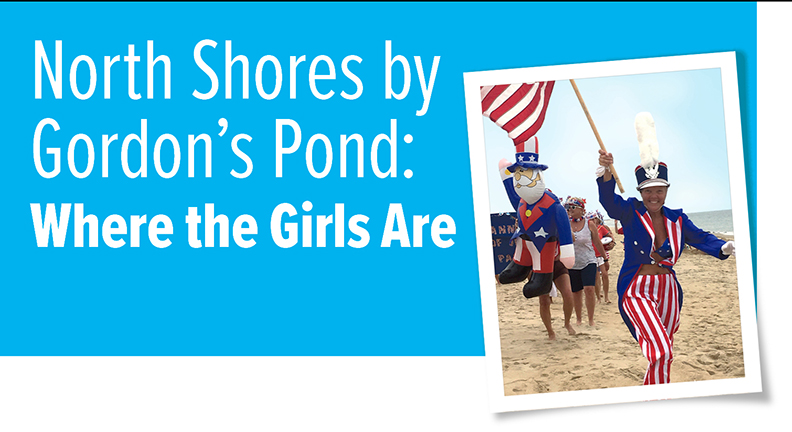 North Shores by Gordon’s Pond: Where the Girls Are

While both Poodle Beach at the South end of the Rehoboth boardwalk and Gordon’s Pond Beach in Cape Henlopen State Park attract a pretty mixed crowd of guys and gals these days, Poodle has long been known as the guys’ beach, with Gordon’s Pond a hit with the gals.

It all started back in the late 1960s, when the Army used that Cape Henlopen park area as a military resort. Then, its name was Whiskey Beach. Why the name? Historical signs posted there reflect the beach’s history as drop-off point for illegal bootleg liquor in the 1920s.

“In the late ’60s through the ’70s, it was a very rowdy spot,” recalls CAMP Rehoboth Treasurer Natalie Moss, who has been coming to the beaches here since then. “You could drink, and buy burgers from a little stand in the parking lot.”

Rehoboth Beach resident Rich Barnett tells us that Whiskey Beach had quite a reputation through the mid to late ’70s, “as the epicenter of Rehoboth’s straight singles scene where hundreds of twenty and thirty-somethings would gather to dance, drink beer, play frisbee, and flirt.”

At that same time, Rehoboth’s fledgling gay community/visitors flocked to the beach—Poodle Beach—at the southern end of the Rehoboth boardwalk. There, in the late ’70s and early ’80s, Poodle Beach was very mixed, with both men and women enjoying its attractions. Some people flouted the rules, drinking alcohol and (the women) sunbathing topless. There were arrests; there was antagonism between the crowd and the police.

This was long before CAMP Rehoboth came into being, long before the late Steve Elkins and current CAMP Rehoboth Interim Executive Director Murray Archibald forged a better working relationship between the Rehoboth police and the LGBTQ community.

“I remember the police standing on the edge of boardwalk, just daring people to break the rules,” Natalie recalls. “And because of the police pressure on Poodle Beach, women started going to the newly developed state park beach above North Shores.”

Located a mile up from the Rehoboth boardwalk, the new park no longer permitted liquor on the beach, or misbehavior in the dunes (need I say more?). So the straight singles scene migrated south to Dewey Beach where “they have lived happily ever after,” says Barnett. Misbehaving gay boys were also encouraged by the park rangers to move their activities elsewhere.

At first, the girls congregated strictly on the right side of the rocks facing the ocean. If there were guys there, they stayed to the left side. Natalie remembers, “Every weekend, you’d see the same people there. We forged great, long-lasting friendships—it’s all about the people.”

And the privacy. In those days, it was a delight to be at the beach with same-sex pals, away from the prying eyes, stares, and overt disapproval of the straight family crowd. To keep it that way, the women who gathered on blankets and under umbrellas would react if they saw straight families encroaching on their territory. The women would start kissing their partners and inevitably, the interlopers would disappear further down the beach toward Rehoboth.

In the late ’80s, through the ’90s and the turn of the century, “The women would gather there in the heat of the day, 10 till 2,” says Natalie. “If you weren’t in the parking lot at Gordon’s Pond by 10 or 10:30, it would fill up and you’d be out of luck.” She continues, “By the early ’90s, a large group would spend the afternoon swimming in the pool at the Renegade dance club.”

One of the Gordon’s Pond traditions has been a July 4 “parade” led by longtime Rehoboth resident Karen Lukeman. She and a group of about 20 women, dressed in over-the-top patriotic gear, celebrate on the beach, with other beachgoers falling in line for the parade. It’s a blast and it’s scheduled again this year at 1 p.m. on Wednesday, July 4.

The Gordon’s Pond beach area remains an extraordinarily popular spot for the women of the Rehoboth/Lewes area. These days, you are more likely to see men and women on both sides of the rocks. Leashed dogs are welcome—with their humans—on the left side. A renovation and expansion occurred in 2014, with the addition of a picnic pavilion.

And as for the family crowd, the gayby boom has made the beach area much more hospitable to youngsters. Gay and straight couples or families mingle more and more.

In an amusing twist, this year, it’s an unguarded beach (but you can still get a hot dog!)—so alcohol is once again permitted. No hanky-panky allowed in the dunes, though. The friendly park rangers still patrol!

So head to North Shores, Gordon’s Pond for the July 4 holiday, the following weekend, or anytime. The park is accessible along Ocean Drive until it dead ends at the park. There’s a large parking area, but it still fills up quickly on the weekends. Out-of-state residents pay $10 admission fee; Delaware residents pay $5. An annual pass for locals is $35, while Seniors (65 and over) can get a lifetime pass for $65.

You’ll see lots of gals congregating, lots of dolphins swimming by, a close-up look at the World War II towers on the beach, and a real landmark for the LGBTQ community. ▼