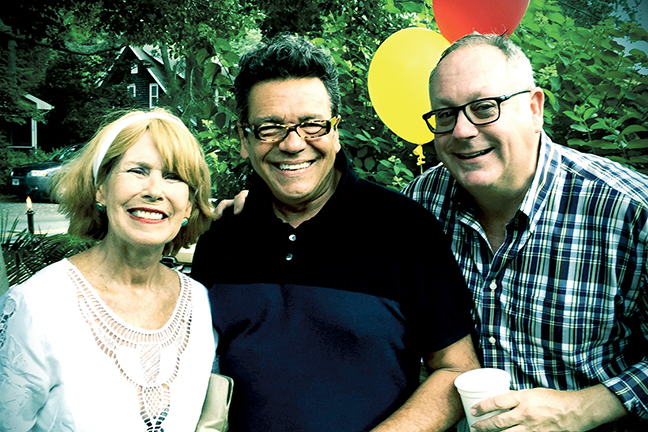 Trick it Up: A Tribute to Mary Lou Sheehan

I knew it was time to buy a place in Rehoboth the day I walked in on my very overweight landlady pushing an upright vacuum cleaner over baby blue nylon shag carpeting.  She was wearing a sheer mini muumuu and sipping from a 64-ounce Big Gulp soft drink balanced precariously between her ample bosom and double chin. I could see her pudding.

Taking the next step, though, wasn’t going to be easy. My partner Michael and I were young pups back in 1994, living in a Dupont Circle row house we’d renovated and that had left us gun shy and house poor. But we were determined. Most of our friends were veterans in the big summer gay group rental scene in Rehoboth. Few were actual homeowners. Who should we turn to for advice? Which realtors were gay friendly?

That last question was important because Rehoboth in the early 1990s wasn’t as welcoming to gay folk as it is today. Many local residents feared that sodomites and sinners were overtaking their town. Inflammatory anti-gay rhetoric was common. Bumper stickers appeared proclaiming “Keep Rehoboth a Family Town.” And, there were some terrible gay-bashings.

Who could you trust? Word on the street—scratch that— word in the gay bars was Mary Lou, that’s who. She knew the inventory, as well as the right settlement attorneys, home inspectors, and mortgage lenders in Rehoboth who were cool with gay clients.

And when she drove up that first time in a green Jaguar convertible wearing a cheetah top and jeweled sunglasses, well, it all made sense. Michael and I climbed aboard, Bloody Marys in hand, and embarked on our search for the perfect beach house.

Things didn’t start well. Homes in our price range were either too new or too prefab or located in neighborhoods with too much grass. After a couple of hours and with fresh Bloodies in hand, she brought us to the Pines neighborhood on the north side of town. The absence of concrete sidewalks was refreshing, but we couldn’t hear or smell the ocean.

“How much will it cost to get one block closer to the beach?” we asked, looking wistfully down Columbia Avenue toward the Atlantic.

We put seventy-five thousand more on the table, or in this case, on the dashboard. “We don’t need granite countertops.”

A few minutes later we pulled up in front of a run-down cottage and followed her up a rickety set of steps onto a screened porch with chipped white rattan furniture and pale pink mildewed cushions. “Keep an open mind,” she counseled. “You can trick it up.”

Mary Lou stood in front of the door, hands on hips. “Coming’ in,” she hollered. Hearing no protest, she kicked open the door with her black Prada boot. Beer cans went flying.

A family who ran a funeral business in Wilmington, Delaware, had built the cottage in 1921. It had become a notorious group rental house owned by a couple going through a nasty divorce. It looked and smelled like a fraternity house. Dear God, there was cargo furniture everywhere. The only thing missing was John Belushi himself.

The place had seen few renovations over the years. Tongue in groove paneling covered the walls and the ceiling. Luckily it had been shellacked and not painted. Hardwood floors and the original fireplace had not been touched. Of course, the foundation was crumbling, the kitchen appliances were circa 1965, and it looked like the wiring had been done using old lamp cords. Window unit air conditioners and exposed radiator pipes added a nice touch. But we could hear the ocean and we were stumbling distance to Baltimore Avenue. It was perfect.

I’d like to think the experience was unique, but the fact of the matter is a lot of people in Rehoboth have colorful real estate stories to tell about Mary Lou. I know because I’ve heard them over the years, told always with a good laugh and an impersonation of her distinctive nasal voice, a cross between Fran Drescher and Little Edie Beale. I’m sure others, like me, are feeling the sadness in the passing of a cherished friend, because that’s exactly what Mary Lou became with her clients—friends.

While we can and should reminisce about her oversized personality and affinity for martinis and animal print pants, I think it’s also important to recognize her role as someone who contributed to building the Rehoboth we all love today. As one of the early real estate agents who openly embraced the gay community, both professionally and personally, it’s not a stretch to say that Mary Lou helped “trick up” the town, to use one of her favorite expressions.

Mary Lou Sheehan passed away last month after an extraordinarily long and courageous battle with cancer. She was an original and she will be missed.