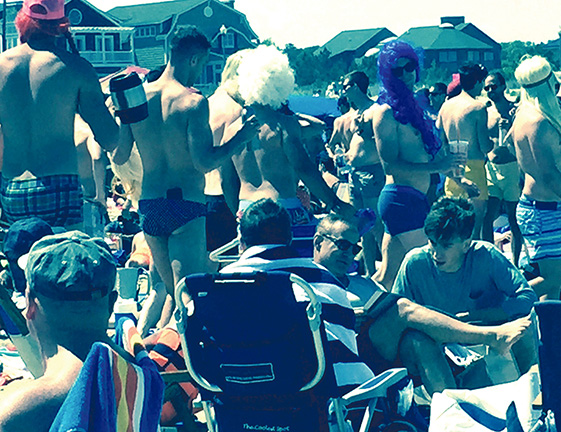 I’ve always considered Memorial Day a bit of a schizophrenic holiday. Officially it commemorates men and women in the armed forces who died protecting the country. Unofficially, it kicks off the beginning of the summer season here in Rehoboth and elsewhere, even though the summer solstice doesn’t occur until June 21.

Some people point to Memorial Day as that magical date whereupon it becomes socially acceptable to wear white clothing. Others say it’s the start of the grilling season or time to put away the brown liquors of winter and break out the clear liquors of summer. See what I mean about Memorial Day? It has multiple personalities and everyone is obsessing about something different.

Here are five things that I’m obsessing about this Memorial Day.

1. Poodle Beach. Poodle Beach, that section of the beach at the southern end of the Boardwalk, has been a gay gathering spot since the 1970s. It got the name because two gay cousins used to sit there on the beach with their poodle dogs. (see How Come it's Poodle Beach? in this issue)

Memorial Day weekend is nothing but raucous on Poodle. It’s like being in a Cadmus painting with all the fellas cruising and showing off their winter workouts, tacky wigs, and new summer Speedos. And yes, it’s perfectly fine to stare.

If someone is bold enough to wear a blue wig or a white Speedo, they’re really asking you to take a look at the goods. Just don’t drool. Act nonchalant, as if you’ve seen it before. And speaking of drooling, I recommend some of you older poodles make sure that if you choose to sport a Speedo it doesn’t look like, ahem, a pair of Depends because nobody wants to stare at that…

Now, I’ll offer a few words of wisdom to some of the young poodles. Alcohol is not permitted on the beach. I’ll repeat myself: alcohol is not permitted on the beach. But if you are going to break the rules at least be smart about it. Don’t bring glass. Don’t get shitfaced. And don’t go around flaunting your big ass vodka bottle. This ain’t the Jersey shore.

2. Shirtless Waiters and Shoes. The second thing I’m really looking forward to is the opening of Aqua. I’ve said it before but it’s worth repeating: Who doesn’t like to sip a cocktail al fresco, served up by a shirtless young waiter or bartender? At Aqua on Baltimore Avenue, everyone has his favorite. And I don’t mean cocktail. I hear AJ, Anthony, and Matt are coming back this summer, along with a new crop.

Aqua is also bringing back VIP cards for preferred access and points on purchases. Speaking of going first class, I upgraded my shoe collection for summer evenings on the Aqua deck. Sure, it’s a casual place, but shoes still make the man, as one Philly patron who dishes out wonderful sartorial advice as if it were Novocain has reminded me. It cost me a pretty penny, but I hate to be on the receiving end of one of his disapproving glances, like the time he spotted duct tape covering up a hole on the bottom of my Gucci loafers.

3. Dancing Bears. I’m quite interested in visiting Diego’s Hideaway this Memorial Day. It’s replacing the Double L on Rehoboth Avenue beyond the traffic circle and over the little canal bridge. I’ve read the former owners of Dos Locos purchased it and plan to give it a little facelift. I’ve heard the back patio will have a more tropical feel and they’ll continue Man Dance, the popular Saturday night dance party. Thank goodness we’ll still get that great advertisement on the way into town.

Word on the street says they’re also thinking about adding Philadelphia’s Bearlesque to the entertainment lineup. What’s Bearlesque you ask? Google it. It’s exactly what you think it is.

4. Drinking Pink. The fourth thing I’m looking forward to this Memorial Day is welcoming Rosé wine back into my glass. I know its fine to drink Rosé year-round, but doesn’t it just taste better in a pair of shorts and flip-flops? Rehoboth’s best selection of pink wine is unequivocally to be found at Bin 66 on Route One south of the big canal bridge. Owners Tom and Tom jumped on the Rosé bandwagon years ago and have since curated an amazing selection of pinks. In fact, I believe I heard they offer the largest Rosé selection in Delaware. Personally, I can’t wait to cruise; I mean, peruse the wine racks…

5. A Full Box. The fifth and final thing I’ll be obsessing over this holiday is planting my window boxes. I’m a devotee of the “thriller, filler, spiller” philosophy that puts a tall plant in the middle, mounding plants on the sides, and trailing plants flowing over the edges.

This year’s color palette, I’ve already decided, will be yellow and white. It means sometime during the holiday weekend I’ll be paying a visit to Windsor’s out on Route One. Owner Jimmy Windsor has been putting his hands on the boxes of many a Rehoboth gardener over the years, and he’s always happy to help with your box.

So there you have it. The list of things that have me all hot and bothered this Memorial Day holiday. Can’t wait.▼