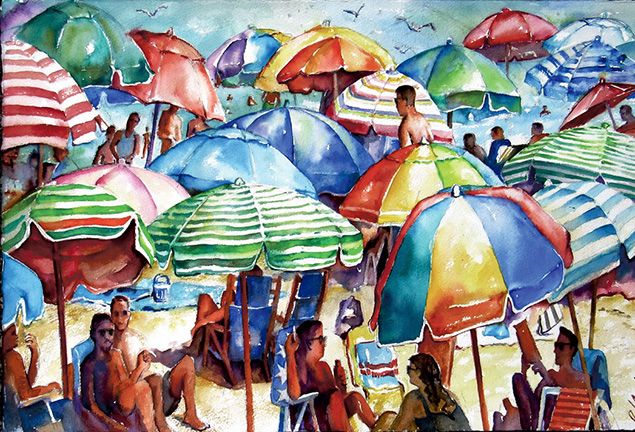 Thousands of guys, along with lots of women head to Poodle Beach every Memorial Day weekend. Do you know the story behind this patch of sand?

That sandy stretch was the home of Louisa Dupont Carpenter, an aviatrix and—though married to a man—rumored to enjoy the lesbian lifestyle. One of her closest friends was Hollywood legend Tallulah Bankhead, who often visited Louisa there, along with many homosexual male friends, during the 1930s and 40s.

Carpenter Beach became a known gathering spot for gay visitors and continued that way through the 50s, 60s and early 70s. Hundreds of older gay men would sun and socialize there, a comfortable distance away from the vacationing straight couples and families on Rehoboth Beach.

Gay people faced the awful threat of exposure, firings, and even prison back then, so staying to themselves at Carpenter Beach made sense. Why, then, don’t we still plant our rainbow flags there?

In the early 80s, even with the threat of being outed, old-timers recall two gay cousins who got fed up dragging their beach chairs all that way past the boardwalk.

One day, they brazenly spread their blankets on the sand near Queen Street, and invited friends to join them. Soon, this growing collection of gays took a stand on the sand, holding their ground as the Rehoboth family crowd moved slightly north to accommodate them.

But, wait! Why is this “new” area called Poodle Beach? Perhaps, it was a hurled slur, then proudly taken up by the LGBT crowd. Look for the answer in Rich Barnett's article.

These days, thousands of LGBT folks gather there, it’s the site of Drag Volleyball on Labor Day weekend, and a hot place to be all summer long.