The Women’s FEST sports activities began on Thursday, April 12, with a beautiful day at Rookery South Golf Course. Though this was the first year Women’s FEST offered an 18-hole venue to accommodate more participants, the activity sold out in record time.

Following a continental breakfast, and practice with free buckets of balls, 84 women took to the course for the 9 a.m. shotgun start.

The intense but fun competition was followed by a luncheon and award presentations. Sponsors Dawn Dupre and Megan Keating from Morgan Stanley, The Dupre Keating Group, and Lana Warfield from Berkshire Hathaway Home Services at Gallo Realty generously donated prizes. There were honors for team winners and some individual skills. The Rookery donated gift cards to all the par 3 Closest to the Pin winners.▽ 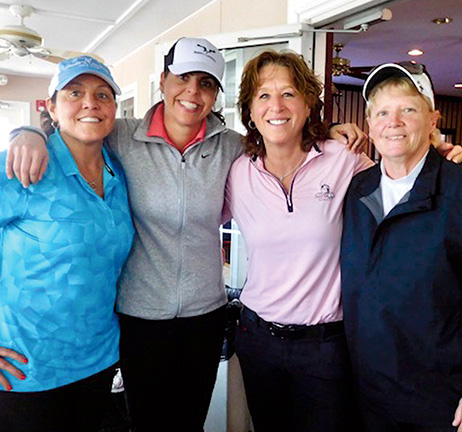 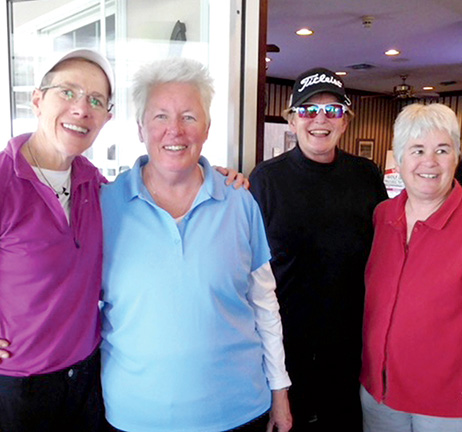 Women’s FEST Pickleball Sells Out for Year of the Woman

Each flight initially played in a Round Robin within their group consisting of five, 12 minute games. At the end of Round Robin, following the totaling of points, the two top teams in each group moved on to the Bracket Finals.

In the early rounds of the Bracket, teams played single games of 15 and the Gold Medal match was best of three games. The entire Bracket play was outstanding in all three flights.

According to organizers, the A flight Gold Medal finals featured was the best level of pickleball ever witnessed in this area. Kim Gruber and Stephanie Covington took on last year’s champions Pearl Morris and Diane Milan to a third game before Pearl and Diane prevailed in a long hard fought game. They scored incredible points and got the large crowd up on their feet cheering.

Courtney Vaughn and Chris Marsiglia battled Wendy Maclay and Sheree Davis in one 15-point game for the Bronze Medal, with Courtney and Chris prevailing.

The B Flight saw first-time Women’s FEST players Karen Faber and Lisa Hatfield take on Kathy Carrell and Barb Beavers. This outstanding match saw a third game needed before Karen and Lisa could declare victory for the Gold Medal. Kathy Casey and Leslie McClintick played Sherry King and Jean Burgess for the Bronze Medal with Kathy and Leslie taking the match.

Vicki Bertolet and Joyce Ilg battled Lynn Shifren and Laura Hutchins for the Bronze, with Vicki and Joyce victorious.

Gold, Silver and Bronze medals were awarded to first, second and third place winners and this year, for the first time, a Red medal was awarded to the fourth place teams.

The Tournament Committee thanks major sponsor, Diane Scobey and other sponsors: Sawgrass Pickleball Club, First State Pickleball Club, and Delaware Senior Olympics. Thanks to the Dave Marshall Tennis Center for hosting the event.

The Women’s FEST Pickleball event was made possible by the help and hard work of numerous volunteers—setting up, checking in players, keeping time, recording points and scores, and maintaining the brackets.

The final Women’s FEST sports event was a the Cornhole Tournament on the patio outside the Atlantic Sands Hotel and adjacent to the beach. For once the weather was good: a perfect Saturday morning for this fourth annual Women’s FEST Cornhole competition.

The first year, the Cornhole competition had 15 teams and players had to contend with snow flurries. Only the heartiest of competitors ventured out to the event that year. For the second annual contest, there was added prize money for both winners and runners’ up.

This year was different, with bright sunshine. While the event is mainly for fun, some very competitive teams entered, raising the tension as well as the fun of the game. But the important ingredient is fellowship!

Assisting in raising the fun level, this year, for the first time, the Atlantic Sands offered a cash bar on the patio­—a huge hit!

People walking the boardwalk on that beautiful sunny Saturday stopped, enjoyed watching the game, many of them asking the rules and even the name of the game. As the event drew to a close this double elimination tournament produced clear winners: Cornhole champions are on the right—Team Lattimer, and the runners up (on the left), Team Sweeney.▼ 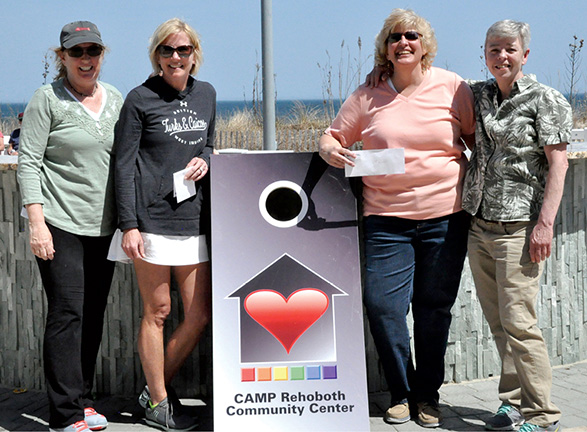